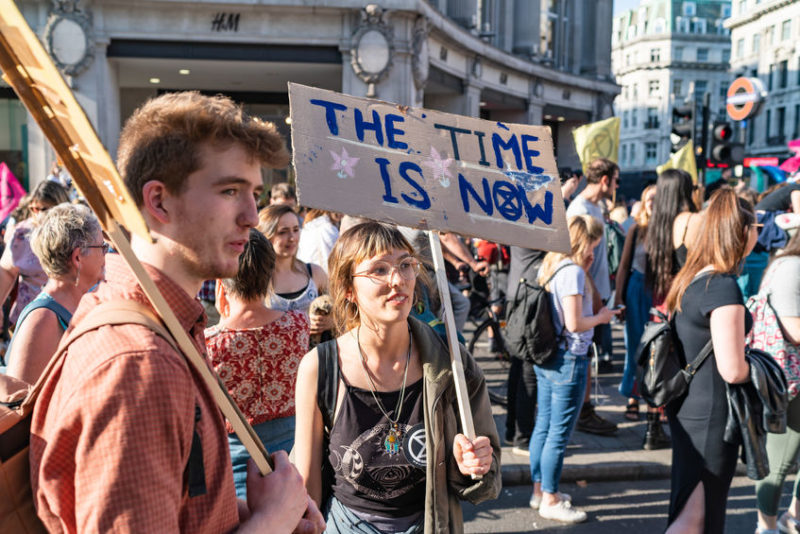 Is paralyzing traffic and stopping trains an act of civil disobedience, which should be tolerated? I would call it “serious disruption” and this is just what the climate alarmists plan for DC, September 20-23.

They call it “civil disobedient disruption” but it is not a march, rally, sit-in, or other localized action. It is a widespread, systematic attempt to do as much damage as possible. And there certainly will be economic damages, especially if the tourists and commuters stay away.

Climate alarm is clearly out of control, or rather it is now controlled by would be disrupters. The danger here is their thinking that the end justifies the means. In their minds they are trying to save humanity, or its future well-being, or something absurd like that. But an absurd end justifies absurd, and dangerous, means. Here is how they put it:

“We will block key infrastructure to stop business-as-usual, bringing the whole city to a gridlocked standstill. Parents, workers, college students, and everyone who is concerned about the climate crisis will skip work and school and put off their other responsibilities to take action on the climate crisis.”

“This is the mass uprising that everyone with climate anxiety has been waiting for. This is an uprising for life itself, fighting back against the forces of destruction. This is your chance to take action to save the people, plants, and animals you love. Let’s rise up and shut down D.C.!”

Government by mass uprising and citywide disruption is not my idea of America or of civil disobedience in favor of a just cause.

When stopping traffic and Metro disruption does not work, which it won’t, what comes next? Arson? Property destruction? Physical violence on people? The sequence is well known.

It will be interesting to see if the gung-ho alarmist Democrat presidential candidates endorse bringing the whole city to a gridlocked standstill. After all, they have sowed this ill wind. Will the ones who work here, like Senators Sanders and Warren, show up for work? Or will they perhaps actually person the barricades.

On paper there are two days of disruption, Friday the 20th and Monday the 23rd. The first is timed to fit the school strikes pioneered by Earth Child-in-Chief Greta Thunberg, which are called FridaysForFuture. Their absurd rationale is this: “School children are required to attend school. But with the worsening Climate Destruction this goal of going to school begins to be pointless.”

The Friday action and damage may well last over the weekend, but Monday’s finale attack is specifically timed with the jumbo UN climate change meeting in New York. Here the world’s nations are supposed to proudly announce much tougher new emission reduction targets under the Paris Accord.

Guess what, the major emitting countries are not going to do that. Most have already said so. Of course in the mild-terrorists’ minds this will mean they have to redouble their efforts, right? Insanity is like that. Now it gets dangerous.

What exactly is their goal? Here is what they say: “We need to fundamentally change the power structure of the United States if we want to stop the climate crisis, and shutting down D.C. is a big step in the right direction.”

How this mayhem is a big step in the right direction escapes me, but then I do not share their emergency lunacy. Is their message “Do what we say or we will shut down your cities”? This is extortion not activism.

As far as fundamentally changing the power structure of the United States, as the Beetles said “We’d all like to see the Plan.” What power structure are they shooting for, hopefully not literally? One thing I am sure of: Earth Children should not be in charge of America.

Trying to “shut down” an entire city is far too extreme to be tolerated as civil disobedience. It should be treated as damaging and dangerous extremism.

David Wojick, Ph.D. is an independent analyst working at the intersection of science, technology and policy. For origins see http://www.stemed.info/engineer_tackles_confusion.html

For over 100 prior articles for CFACT see http://www.cfact.org/author/david-wojick-ph-d/ Available for confidential research and consulting.