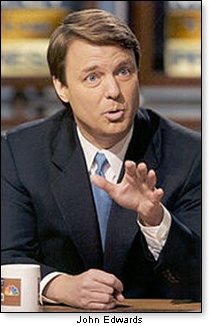 “…I have set before you life and death, blessings and curses. Now choose life, so that you and your children may live” (Deuteronomy 30:19).

Remember good ole boy Johnny Edwards – actually North Carolina Democrat Senator John Edwards (1998-2012), VP candidate in 2004 and presidential candidate in 2008? Edwards is hard to forget because he burst upon the national stage as the golden-tongued lawyer who was famous for defending the rights of the unborn.

According to writer Douglas Johnson in National Review, “in 1985, John Edwards stood before a jury and channeled the words of an unborn baby girl. In his closing argument to the jury, Edwards conveyed what the unborn child, Jennifer Campbell, purportedly had been feeling hour-by-hour as her distress grew.

“She speaks to you through me,” Edwards told the jury. “And I have to tell you right now – I didn’t plan to talk about this – right now I feel her. I feel her presence. She’s inside me, and she’s talking to you.”

Edwards won that lawsuit and went on to file at least 20 similar lawsuits in the years following, achieving verdicts and settlements of more than $60 million for his clients.

Johnson writes that 13 years after the Jennifer Campbell lawsuit, Edwards was elected to the U.S. Senate from North Carolina, but “somewhere along the line, John Edwards lost his ability to hear the voices of unborn victims.”

Yep…that’s what happens when the poohbahs of the Democrat Party dictate that anyone who wants “in” to their baby-killer cabal get rid of that empathic feel-for-the-baby stuff and embrace their kill-’em-in-the-womb mantra. And Mr. Smoothie did just that – became deaf to the pain of in-utero infants and on-board with the baby killers.

It is chillingly accurate to say of the former pretty-boy senator – not to mention his affair with Rielle Hunter and the baby girl they had while his wife was dying of breast cancer – that he was a morbid harbinger of his fellow Democrats’ devolution.

While abortion was always their Holy Grail – a virtual litmus test for admittance into the world of their perverse values – even Mr. Edwards and his flexible morality could not have imagined that in January of 2019, the entire Democrat New York State legislature would give a standing ovation to the passage of a law that sanctioned abortion up until the very moment of birth!

That’s right, a law that gave the right to a mother – exhausted by labor and in pain – to decide to snuff out the life of her fully-developed, perfectly intact, full-term baby. 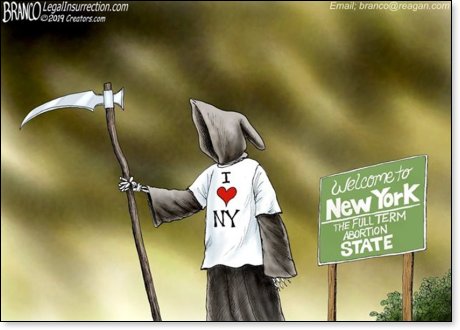 Did these Democrats recoil at the very idea of this kind of savagery? Did they weep or wring their hands at the barbarity of it all? Did they stage a protest against the infanticide that is forbidden in both Hebrew and Christian Bibles?

No – they stood up and applauded!

Writer Wesley Smith, in Infanticide Makes a Comeback, recalls a recent Senate bill – the “Born-Alive Abortion Survivors Protection Act” – that requires any baby who survives an abortion to be treated with “the same degree of professional skill and care as [would be given] to any other child born alive at the same gestational age.” And the bill also would have outlawed infanticide.

Guess who objected to these eminently reasonable and humane guidelines in February of this year? None other than 44 out of 47 Senate Democrats who blocked the Senate from voting on this bill, including presidential wannabes Kamala Harris, Bernie Sanders, Kirsten Gillibrand, Amy Klobuchar, Cory Booker, and Elizabeth Warren!

Since Roe v Wade was passed in January 1973, over 61 million babies have been killed – legally.

To underscore the kind of vibrant lives of each of these babies – even at 12 weeks – and who these “pro-choice” candidates want to continue to snuff out, here is the clearest MRI of a pregnancy every recorded – only 44 seconds: http://americandigest.org/wp/news-youll-never-see-in-the-new-york-times/.

Every Democrat candidate for president has seen this or a similar film, and is also aware of the following irrefutable fact: Unborn babies feel! This is the conclusion of one of many studies – this one from Heidelberg psychotherapist Ludwig Janus, reported in February of this year:

“Babies in utero are happy…angry….fearful…and they like music,” Janus concluded. By eight weeks, the fetus has developed a sense of touch, by 13 weeks taste, at 17 weeks hearing, at 25 weeks sight – the miracles go on.

But none of this matters to people who think that the inconvenience of an unwanted pregnancy is worthy of infanticide.

And to think – one of these moral paragons wants your vote!

THE PARTY OF DEATH

Clearly dazzled by the beauty of the NY state infanticide law, the governor of Virginia, Ralph Northam – a pediatric neurologist no less! – decided to go one better. Within days of the NY decision, he announced that, in his state, mothers whose babies survived abortion would and should have the right to kill their babies after they’re born. 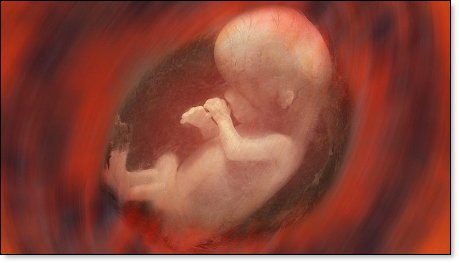 Disgusted yet? It gets worse.

IN LOVE WITH DEATH

If you had a measured conversation with a candid Democrat – in strict privacy and away from cell phones, microphones, and cameras – and asked if he or she actually liked

– all of them would likely tell you a resounding NO!

But if you followed up and asked, then how on earth could you vote Democrat? Reflexively, they would answer: ABORTION!

According to Sebastian Gorka, former Deputy Assistant to President Trump, in his recent article “Death and the Democrats,” “[O]ur existence as free men and women starts [n]ot with the right of association, or a free press, or freedom of conscience, or the right to keep and bear arms. Everything begins with the right to life” (emphasis added). But the Democrat Party in 2019, he said, “has quite literally become the political party of death.”

Gorka documents the grisly statistics: “The U.S. abortion industry that Planned Parenthood champions kills at least 600,000 babies in utero each year. For perspective, the 70,000 plus deaths last year from opioid overdoses is deemed to be a national crisis with federal and state programs created to staunch the flow of drugs into our nations and prevent needless loss of life.

“But more than eight times that number are killed as a matter of choice, not addiction or accident, and the Left celebrates it and wants more…. The arch-eugenicist Margaret Sanger and Adolf Hitler would be most proud.”

In fact, writer Patricia McCarthy reminds us that Sanger “founded Planned Parenthood to purposefully dispose of black babies – and the Democrat Party has at last embraced her cause openly and without shame.”

Pro-life advocates remind us that abortions are not only immoral but racist, in effect decimating the black population.

According to Right to Life of Michigan:

And Professor William D. Rubinstein of the University of Wales posits in his stunning article “Legalized Abortion and the Triumph of Eugenics” that “the total black population of the United States is about 40 million. Including the children and grandchildren of these 19 million who were never born, it is reasonable to assume that, without legalized abortions, America’s black population would be in the order of 70 million or even more.”

And fake news calls Republicans racist! Typical projection – accusing your competition of what you yourself are guilty of! 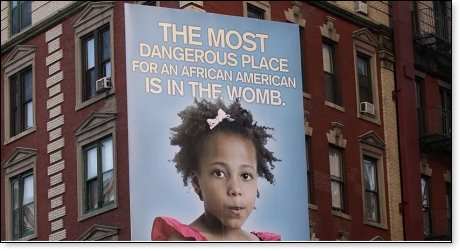 The Democrat governors of New York and Virginia are not alone in their cravenly enthusiastic approval of infanticide. According to Tony Perkins, president of the Family Research Council, Wisconsin Democrat Governor Tony Evers (who succeeded pro-life Republican Gov. Scott Walker) “is perfectly okay with…infanticide as long as it’s done neatly and under the watchful eye of a healthcare professional.”

“We have all sorts of issues to deal with in the state of Wisconsin,” Evers told reporters, “and to pass a bill [like born-alive] seems to be not a productive use of time.”

In other words, kill those pesky babies so we can get to the important work of raising your taxes!

Following suit, the state of Rhode Island, led by Governor Gina Raimondo – you guessed it, a Democrat! – just enacted legislation to make abortion legal up to the moment of birth, including partial birth abortions.

And we know that California’s Democrat Governor Gavin Newsom is hunky dory about abortions at any stage, but ever so sanguine about the lives of career murderers. He just abolished the state’s death penalty, effectively sparing the lives of over 700 convicted killers on death row.

Not to omit that last May, the Illinois House passed a bill to repeal the ban on “partial-birth” abortions, and the Illinois Senate did them one better by expanding abortions through nine months and requiring insurance companies to provide expanded coverage – and Democrat Gov. J.B. Pritzker signed it in June. 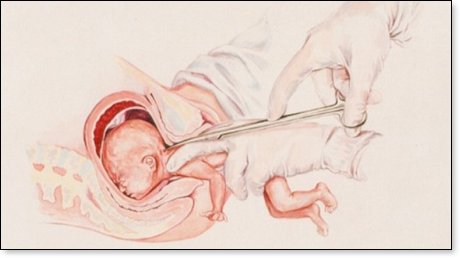 In May, the Alabama state legislature passed a bill banning abortion in the state – “except [when] necessary to prevent a serious health risk to the unborn child’s mother” – the underlying goal of which is to challenge the legal precedent across the country: overturning the landmark Roe v. Wade ruling.

The state’s chief executive, Governor Kay Ivey – you guessed it, a Republican – promptly signed the bill into law. 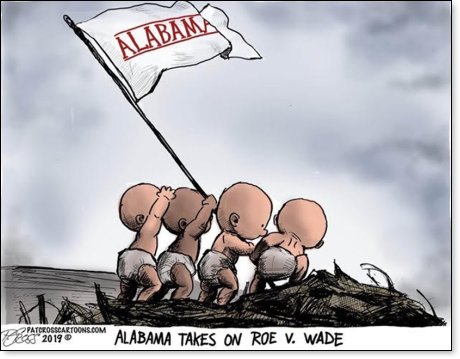 Betsy McCaughey, former Lt. Gov. of New York, public policy expert, and prolific writer, cites a number of young girls and women whose penalties for killing their newborn babies ranged from probation to life in prison.

“Where are the extreme pro-choice advocates when these pathetic women are led to prison in shackles?” McCaughey asks. “They are silent, even though late-term abortion is hardly different from what these convicted women did.”

“At least 12,000 late-term abortions take place yearly,” she continues, “but that’s not enough for Democrats. Abortion extremism is the new normal for Democratic politicians.”

Last month, the Trump administration mandated that taxpayer-funded family planning clinics immediately stop referring women for abortions and maintain separate finances from facilities that provide abortions, and that both kinds of facilities not be under the same roof – rules that critics say deal a mortal blow to Planned Parenthood – which earns over 50 percent of its income from abortion.

In a powerful article “The Silent Scream and the Lies of Roe v Wade,” Alicia Colon discusses Norma McCorvey – the Ms. Roe who brought the Roe v Wade suit to the Supreme Court.

In her second book, Won By Love, Ms. McCorvey wrote about why she changed her stance on abortion:

“I was sitting in O.R.’s offices when I noticed a fetal development poster. The progression was so obvious, the eyes were so sweet. It hurt my heart, just looking at them. I ran outside and finally, it dawned on me. ‘Norma,’ I said to myself, ‘They’re right.’ I had worked with pregnant women for years. I had been through three pregnancies and deliveries myself. I should have known. Yet something in that poster made me lose my breath. I kept seeing the picture of that tiny, 10-week-old embryo, and I said to myself, that’s a baby! It’s as if blinders just fell off my eyes and I suddenly understood the truth – that’s a baby!

“I felt crushed under the truth of this realization. I had to face up to the awful reality. Abortion wasn’t about ‘products of conception.’ It wasn’t about ‘missed periods.’ It was about children being killed in their mother’s wombs. All those years I was wrong. Signing that affidavit, I was wrong. Working in an abortion clinic, I was wrong. No more of this first trimester, second trimester, third trimester stuff. Abortion – at any point – was wrong. It was so clear. Painfully clear.”