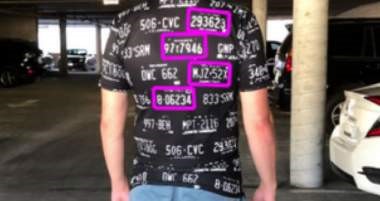 When dressing for a night on the town, you probably never figured on saying, “Hmm, should I choose the Chevy or Ford look? And, no, that isn’t actually an option. There is a new clothing line, however, that lets you “camouflage” yourself as a car in order to disrupt surveillance cameras.

“The garments in the Adversarial Fashion collection are covered with license plate images that trigger automated license plate readers, or ALPRs, to inject junk data into systems used to monitor and track civilians,” reports Cnet.

As Vice explains, “If you’ve ever gotten a traffic ticket in the mail — sometimes complete with a photo of your vehicle, with yourself and passengers looking stunned in the front seat — your car has likely encountered an … ALPR.”

“Like many surveillance technologies in American cities, ALPRs are everywhere, always watching,” the site continues. “They’re attached to everything from public telephone poles to cop cars, but they’re much more than speed trap cameras. ALPRs are privately-owned systems that capture everything resembling a license plate within their purview, collecting up to a thousand plates per minute. So while you’re driving around, or traveling in a rideshare, these systems read the vehicle’s plates and collect its GPS location and registration information, as well as the date and time.”

As for the anti-surveillance garments, they “were revealed at the DefCon cybersecurity conference in Las Vegas on Saturday by the hacker and fashion designer Kate Rose,” writes The Guardian, providing more detail. The paper continues:

Rose credits a conversation with a friend, the Electronic Frontier Foundation researcher Dave Maass, for inspiring the project: “He mentioned that the readers themselves are not very good,” she said. “They already read in things like picket fences and other junk. I thought that if they’re fooled by a fence, then maybe I could take a crack at it.”

To human eyes, Rose’s fourth amendment T-shirt contains the words of the fourth amendment [sic] to the US constitution [sic] in bold yellow letters. The amendment, which protects Americans from “unreasonable searches and seizures”, has been an important defense against many forms of government surveillance: in 2012, for instance, the US supreme court [sic] ruled that it prevented police departments from hiding GPS trackers on cars without a warrant.

But to an automatic license plate reader (ALPR) system, the shirt is a collection of license plates, and they will get added to the license plate reader’s database just like any others it sees. The intention is to make deploying that sort of surveillance less effective, more expensive, and harder to use without human oversight, in order to slow down the transition to what Rose calls “visual personally identifying data collection”.

Rose points out that if these systems can be fooled by fabric, we perhaps should not put so much stock in them.

Yet Rose is neither the only one nor the first to combat Big Brother with technology. For example, you can try to thwart facial recognition cameras by “hacking your face.” To wit: A certain high-tech hood you can don, developed by Project KOVR, can prevent such recognition. Even more interesting and advanced, “Scientists at China’s Fudan University are developing an invisibility mask that uses tiny infrared LEDs wired to the inside of a baseball cap to project dots of light on to the wearer’s face,” writes The Guardian.

But then there’s the hacker who fought the law — and the law won. “Droogie,” who also attended DefCon, registered in California a vanity plate that read “NULL,” “the code used in a number of common database systems used to represent an empty entry,” The Guardian also informs. It didn’t quite work out.

He ended up getting more than 12,000 moving violations.

Far from making him invisible, the system instead assigned to his car every single speeding ticket not associated with a valid license plate.

Successful or not, however, these efforts are a response to a metastasizing, ever more high-tech Big Brother. Just consider London, England, which is notorious for surveilling its residents with a half million “Ring of Steel” cameras. There’s also China’s building of a totalitarian surveillance state, as the Wall Street Journal video below outlines. 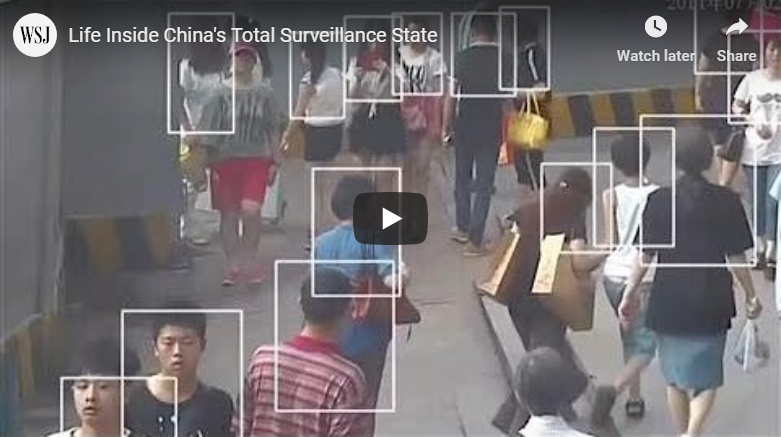 Then there’s Persistent Surveillance Systems in our nation. Inspired by the Air Force’s efforts at tracking Iraqi insurgents, it involves mass-surveillance aircraft technology and was “tested over Compton, California, in 2012,” writes the Atlantic. “In 2016, the company flew over Baltimore, feeding information to police for months (without telling city leaders or residents) while demonstrating how the technology works to the FBI and Secret Service.”

The technology is straightforward (video below): “A fixed-wing plane outfitted with high-resolution video cameras circles for hours on end, recording everything in large swaths of a city,” the Atlantic also tells us. “One can later ‘rewind’ the footage, zoom in anywhere, and see exactly where a person came from before or went after perpetrating a robbery or drive-by shooting … or visiting an AA meeting, a psychiatrist’s office, a gun store, an abortion provider, a battered-women’s shelter, or an HIV clinic. On the day of a protest, participants could be tracked back to their homes.” 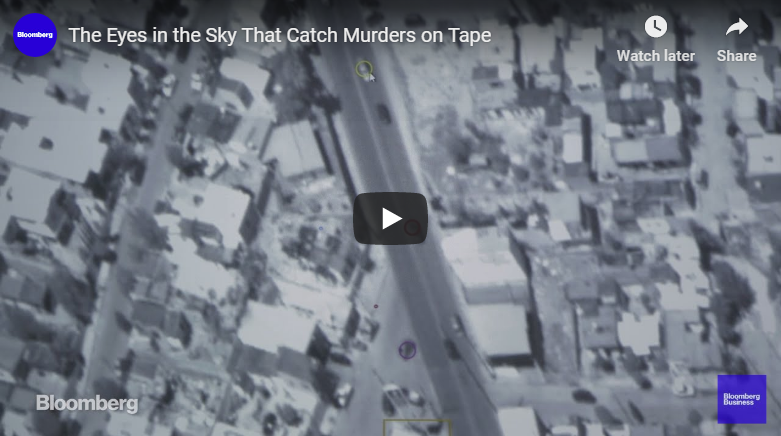 This security may be acceptable to some, especially as crime proliferates and people become more fearful. After all, total surveillance could conceivably eliminate all crime. But at what cost? Is life as a completely secure servant really more appealing than the risk of freedom? Is big government really less dangerous than the criminal on the corner?

Moreover, the technology outlined above is primitive compared to what may lie ahead. Imagine countless millions of insects-size drones — or even, maybe, visually imperceptible nanorobots — monitoring everything, everywhere, all the time and continuously transmitting data to a central computer. Then imagine enforcement automatons dispatched whenever “unacceptable” behavior is detected. This isn’t far-fetched.

Of course, hi-tech anti-surveillance activists can and will try to thwart what may come with their own countermeasures, but ultimately this is a losing battle. The only real solution is a restoration of virtue.

After all, “Only a virtuous people are capable of freedom,” observed Ben Franklin. “As nations become more corrupt and vicious, they have more need of masters.” No doubt. As people’s animal nature is stoked and they increasingly become like beasts, they will increasingly find themselves caged and watched by keepers.

We need to talk less about freedom and more about morality. Take care of the morality, and the freedom takes care of itself.