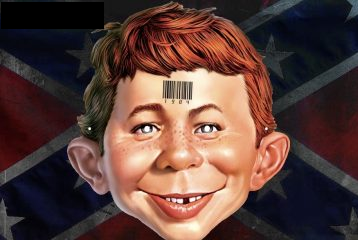 I’m probably as sick and tired of white supremacist canard as you are. I keep harping on it because I’m convinced it is a perfect storm, that is to say a chance for the state to aggravate already record-high political division to the boiling point and exploit it in order to expand the police state and outlaw free speech as terrorism and providing aid and comfort to Nazis, fascists, white supremacists, and nationalists.

Of course, this dinky minority (even the SPLC puts their numbers at a few thousand), is not a threat, at least not a threat on the scale of weekly shootings and murders in Chicago.

The state and its media have blurred the lines between actual neo-Nazis and Trump-supporting “conservatives,” who are indeed MAGA nationalists, not racist white nationalists. The race part was added after Trump won the election. It fits the Identity Politics credo that declares all white people (especially white males) are somehow privileged and owe billions of dollars to “minorities at risk.”

You know it is serious when the editorial board of the Gray Lady of Propaganda posts the following:

The awesome power of the state would work tirelessly to deny future terrorists access to weaponry, money and forums to spread their ideology. The movement would be infiltrated by spies and informants. Its financiers would face sanctions. Places of congregation would be surveilled. Those who gave aid or comfort to terrorists would be prosecuted. Programs would be established to de-radicalize former adherents.

The “awesome power of the state” was demonstrated when it incinerated men, women, and children at Waco, or when members of MOVE were incinerated (along with the rest of the neighborhood) in Philadelphia.

On May 30 the FBI let us know the target. It’s not simply a handful of white supremacists. The threat comes from “fringe political conspiracy theories” that have the magical ability to make people “commit criminal and sometimes violent activity.”

The editors The New York Times want the government to single out individuals, deny First and Second Amendment rights, close down bank accounts, and set-up the witless and incautious for phony terror attacks, a specialty of the FBI (the showcased arrest and trials of patsies reinforce the propaganda and the illusion of threat). The FBI also has plenty of experience with placing “spies and infiltrators” (the latter often responsible for initiating violence) in legitimate political organizations. In fact, it can be argued the FBI specializes in creating terror groups from scratch, as it did under its COINTELPRO.

Did you buy something from Infowars or Breitbart, maybe a t-shirt or a coffee mug? According to the NYT, this makes you a “financier” of terrorism and you may face “sanctions,” whatever that means. Buying macho vitamins from Alex Jones is now considered giving “aid and comfort” to the enemy.

More surveillance—of email, posts, chats, phone calls, browsing history, and the daily activity of millions of people—will be required to stamp out the fake scourge of white nationalism.

The NYT is calling for re-education camps. Maybe a congressional task force can be sent to China’s Xinjiang re-education camps to study how to mass brainwash thousands, possibly millions of people not on narrative. Special mental hospital-prisons might be in order.

SF author Philip K. Dick came up with the concept of “precrime,” an effort to prevent crime before it happens. Dick’s story, The Minority Report, depended on “precogs” (mutants capable of precognition) to prevent future crimes.

Instead of precrime, we face the stigma of thoughtcrime, a political crime described in George Orwell’s dystopian novel Nineteen Eighty-Four.

Precrime detection is not necessary if the public is trained the idea of political change is not only impossible but a seriously punished thoughtcrime.

The NYT editorial board has suggested the creation of thought police. Any deviation from Big Brother’s totalitarianism brought agents of Thinkpol and the Ministry of Love (Miniluv) down on those suspected of independent thought.

According to the novel’s arch-nemesis, Emanuel Goldstein,

Crimestop means the faculty of stopping short, as though by instinct, at the threshold of any dangerous thought. It includes the power of not grasping analogies, of failing to perceive logical errors, of misunderstanding the simplest arguments if they are inimical to Ingsoc, and of being bored or repelled by any train of thought which is capable of leading in a heretical direction. Crimestop, in short, means protective stupidity.

Protective stupidity is precisely what the state with the help of its corporate propaganda media is attempting to accomplish.

If you don’t want to lose your job, have your bank account shut down, your children taken away by the state, your firearms confiscated by a SWAT team, and your every move strictly monitored by an increasingly sophisticated high-tech surveillance state, you’ll embrace cognitive dissonance.

For instance, that a handful of Arabs violated the laws of physics, made buildings collapse in their footprints, and had the debris of a large aircraft disappear from a Pennsylvania farm field and the lawn at the Pentagon.

Published with Permission of The Washington Standard