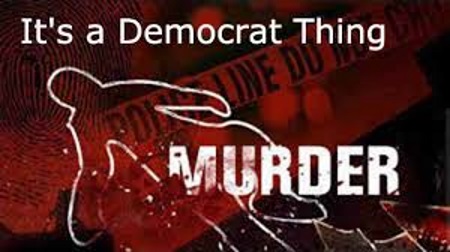 With leftists seeking to blame the El Paso shooting on President Trump, guns, white people and whatever other boogieman will help score political points, a simple fact should be understood:

Murder is a Democrat thing.

We can start with the striking statistic that 68 percent of all homicides occur in just certain parts of 5 percent of America’s counties – and all, or virtually all, of these are Democrat areas.

Also striking is Democrats’ devolution on prenatal infanticide. The line always was, though the savvy never believed it, “We want abortion to be safe, legal and rare.” Leftists also insisted that “we don’t really know when life begins” or when “an unviable tissue mass becomes a baby.” To echo Barack Obama’s debate disclaimer from some years ago, that’s above their “pay grade.”

But all that has been aborted. Now leftists support prenatal infanticide up until birth, and sometimes beyond, though this is subject to change without notice. (Coming, perhaps, is the day leftists will absolutely know when an “unviable tissue mass” becomes human: when it can vote Democrat.)

And, yes, you can murder him because you feel like it. How sociopathic can you get?

This devolution is no surprise. Leftists are, almost one and all, de facto atheists; as such, they essentially believe man is just a material being, a chemicals-and-water organic robot. To quote barrel-of-laughs botanist Lawrence Trevanion, people are “objects that perceive.”

Obviously, viewing people as objects leads to objectification; you use objects and, when the spirit moves you, maybe even abuse objects. This is why leftists such as sanctimonious Pete Buttigieg and Irish Bob (O’Rourke) will politicize tragedies such as the El Paso and Dayton shootings before the blood is even dry. To them, the victims are objects that serve a purpose, a means to an end.

So they can be human props, just like the Illegal-alien Children in Cages™, or kids paraded in front of press conferences or on stage at Democratic National Conventions. “Do it for the children?” It’s really, “Do it with the children” or “Do it to the children” – whatever yields the power you crave.

Of course, projecting, leftists are also full of the hate they ascribe to others. (After all, they’re incapable of hating what they see as the sin without hating who they see as the sinner, so they assume others operate likewise.) This is why former CNN host Reza Aslan, an Iranian immigrant who once ate human flesh on television, recently sent a tweet in which he appeared to say that all Trump supporters should be eradicated.

If that was his meaning, he’d just be carrying on a long tradition. The “Left” has been bloody ever since it was born during the French Revolution, where Maximilien Robespierre’s crew killed thousands in the Reign of Terror. Since then, the USSR’s Stalin, China’s Mao, Cambodia’s Pol Pot and others have added approximately 100 million corpses to the total. The formula is simple, too: Leftists+Sufficient Power=Dropped Mask and Mass murder.

Power really is the only limiting factor because godlessness, that leftist norm, correlates with moral nihilism, and thus are leftists bereft of true moral constraints. Fyodor Dostoevsky explained this state of being in The Brothers Karamazov, writing, “Without God, all things are permitted.” Leftists don’t have principles, but preferences – which is why they’re notorious for the political-winds-enabled goalpost shift.

Worse still is how leftists (and the conservatives who defend yesterday’s liberals’ mistakes) destroy children, on the inside, with corruptive miseducation, entertainment and sexual-devolutionary messages and temptations. From bodies to hearts to minds to souls to statues and traditions and beyond, threatening all that’s great and good, destruction is leftists’ stock in trade.

Leftists were once part of the counter-culture, but the only culture that’s truly theirs is the Culture of Death, that dark phenomenon Pope John Paul II so lamented. So you can point fingers, modern Democrats, but in your hearts some of you, I suspect, know exactly what too many of you are: stone-cold killers.