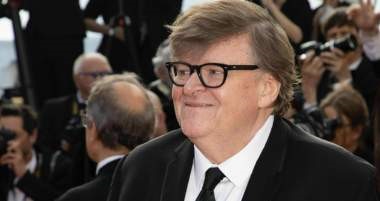 In something of an in-kind contribution to the Trump 2020 campaign, MSNBC gave crackpot documentary producer Michael Moore a full 12 minutes after Tuesday’s Democratic debate to explain how the Democrats can help re-elect The Donald.

Moore, whose documentaries are riddled with factual errors, unbosomed himself of a spiel in which he said that average Americans are — like Moore, The Squad, and a majority of the Democratic presidential candidates — liberal and progressive.

The party must hang a sharp left turn, he said, to get back in the White House.

Michelle Obama
Speaking to the leftist network’s Brian Williams, another media star who fiddles with the truth, the upshot of Moore’s election strategy is this: Democrats must nominate a candidate that makes Hillary Clinton look like a member of the John Birch Society.

Newsbusters.org helpfully provided a partial transcript to Moore’s recipe for disaster, the most significant point of which was who that candidate should be.

Answer: Michelle Obama, the better half of POTUS 44.

Who can crush Trump? Who is the street fighter? We saw it in Bernie last night. Who is the street fighter that can crush Trump? And frankly, I think there’s a person that could do this, if the election were held today, there is one person that would crush Trump. And she hasn’t announced yet. And her last name rhymes with Obama. In fact, it is Obama. Michelle Obama.”She would beat him in the debates, he wouldn’t be able to bully her, he wouldn’t be able to nickname her and she is beloved.

In other words, Trump would be handcuffed because Obama is black, thus affording her a measure of protection from his slashing attacks that send liberals into a smoking meltdown.

Moore noted that he predicted Trump’s victory in 2016, and Trump will win again if the party doesn’t move even further left. That’s because the average working-class American is not the same person he was during the Reagan Era.

Most of those voters are women, nonwhite, and 18-35 years old, and Democrats can’t worry about moving too far left for fear of losing the white working-class vote:

Maybe that was true 30 or 40 years ago. It’s not true in the America we live in. Nearly 70 percent of the electorate next year, eligible voters, next year in this country, 70 percent are either going to be women, people of color or young people between the ages of 18 and 35 or a combination of the three. That is America in 2019, 2020.

Forget Whitey
Moore then offered a list of leftist idea he claimed, without evidence that most Americans support: a higher minimum wage, the Equal Rights Amendment, and stopping mass incarceration.

“Down the whole list of issues the majority of Americans take the liberal progressive position,” he continued. “And they will come out if they’re inspired to vote for the candidate that’s going to side with them.”

That’s dubious, but in any event Moore said Democrats must, again, stop discussing the “mythical [white] voter that we don’t want to lose in the Democratic Party. They’ve been lost. Yes, we can get some of them back. But we don’t really need them.”

In other words, the white men who wisely rejected Clinton for Trump are not coming back to the party en masse, but enough of them might to defeat Trump next year.

Moore cited an interesting datum, that since Harry Truman was elected in 1948 only two Democratic candidates secured the white male vote: Lyndon Johnson and Bill Clinton, which is more proof, he avers, that Democrats simply don’t need white men to win. But that analysis has two problems. First, Bill Clinton lost white men: They voted Republican over Democrat 40 percent to 37 percent in 1992 and 49 percent to 38 percent in 1996. Second, Democrats do need white women, who have voted for the Republican over the Democrat in every election since 1972, save two, in 1992 (tied) and 1996. Otherwise, Democrats have lost the white vote in every election since 1964.

Forty million Americans, Moore noted, turned 18 in the last 10 years, about four million annually. All those youngsters, he concluded, will vote for liberals.

As will blacks, Hispanics, Asians, and women.

In other words, Democrats should intensify the anti-white, anti-Christian, anti-American radicalism Americans have seen in the candidates thus far, not to mention what they see from The Squad.

Here’s the question for Moore: If enough voters rejected Clinton in 2016 to give Trump an electoral victory despite his officially losing the popular vote, how will Democrats help their cause by offering an even more radical candidate?