Spanking is NOT violence; it is discipline 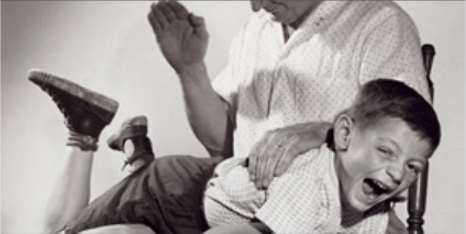 Spanking is NOT violence; it is discipline

There is a movement afoot in Jamaica to ban spanking on the grounds that it is a form of child abuse.

In this story in the Miami Herald, spankings are consistently labeled as acts of “violence.” But they are not.

Spanking is not violence, it’s entirely necessary discipline for a child. It’s not child abuse. In fact, Solomon says that it’s a form of abuse to withhold spanking from a child who needs it. “Whoever spares the rod hates his son, but he who loves him is diligent to discipline him” (Proverbs 13:24).

Authorities in Jamaica have mindlessly connected “beatings” and cycles of violence in the nation. The country has a murder rate that is three times the rest of the Caribbean, and the prime minister believes there’s a correlation between Jamaica’s pervasive use of discipline to punish children and the country’s high propensity for violence. I believe the exact opposite to be true.

Corporal punishment properly administered does not increase violence, it reduces it. If you get a solid spanking for an act of violence – hitting your brother over the head with a toy – it makes you think twice about doing it again.

But one Jamaican official complained that being spanked with a ruler or a paddle by a teacher for misbehaving is “exposure to violence.” She even blamed the murder rate on the word of God: “Samms-Vaughan said Jamaicans’ disciplinary practices are shaped not only by personal experience and the legacy of slavery, but by the Bible – Proverbs 13:24 says ‘Spare the rod, spoil the child.'”

This is nonsense. While Jamaican authorities say that spanking teaches young children that violence is okay, it actually teaches them the exact opposite that violence brings punishment from the authorities, beginning with mom and dad. And along the way, the pain of a spanking teaches them the larger life lesson that there is a price to pay for misconduct.

Adult lawbreakers, on the whole, were not spanked too much as young boys, they were spanked too little. The author grudgingly admits that corporal punishment is actually working. “People always comment on how well-behaved Jamaican children are, and some of the perceptions of people here is they don’t want their children to be as badly behaved as the children in America or Britain.”

Ian Salmon, a self-admitted “big troublemaker,” says his father “beat me to change my ways and I think it worked.”

Only 19 states in the U.S. allow corporal punishment in public schools, which may go a long way to explain why classrooms have become so unmanageable that American teachers are leaving the profession in droves.

Of course, it must be said that not all corporal punishment is constructive. Salmon’s father once held a nail in his ear and reached for a hammer after Ian had cursed at a family friend. That’s not discipline, that’s cruelty.

Spanking must be measured, it must be purposeful, it must be done only in response to willful acts of defiance and disobedience, and it must never be done in anger or accompanied by shouting, name-calling, or verbal abuse.

But still Salmon says the “more than 5,000 licks” he received from his father were a saving grace, saving him from himself.

“Folly is bound up in the heart of a child, but the rod of discipline drives it far from him” (Proverbs 22:15). It’s hard to escape the conclusion that there are many adults in our culture today who still have folly bound up in their hearts and in their heads. Perhaps Solomon is telling us why.