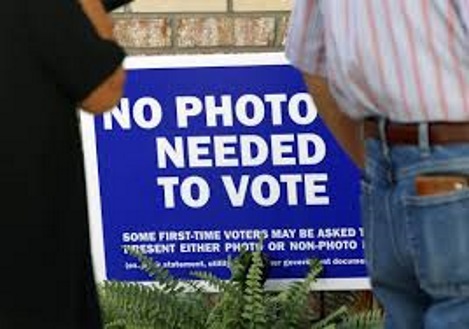 The headline says it all.  Nothing else makes sense for the Dem’s future.  They have nothing, absolutely nothing to run on.  Because in a legitimate election one would think there couldn’t be near enough registered voter citizens who would consider voting for all the absolute craziness they spew and represent.  The following list is but a spattering of it:

The GOOD NEWS is the Dems can’t possibly win in a fair fight.  This is America.  The greatest nation on earth and that ever was, but also the nation that is literally on the ropes currently due largely to a corrupt media and citizen apathy.

The BAD NEWS is they can steal the election and they know it, because no one is stopping them, it clearly appears.  RINOs?  Give us a break.  A real functioning GOP in Washington, DC could right the ship.  But 10 or 15 real God fearing, Constitutional Republicans following the fabulous GOP platform against everyone else in Congress, especially including a worthless ‘Deep State’ leader in the Senate, sucks.

The RINOs hypocrisy might be more upsetting than the upfront nonsensical, deceitful and fatalistic aspects of the socialism exuding from the Democrats, because how can we fight if our poker-faced elected representatives we picked to clean up the mess are betraying us?

America can surely be lost if we don’t wage a most concerted campaign to assure all voting stations be tightly run with strong rules that are enforced such as:

The only two fixes I can envision, both, are vexing and would cause gnashing of teeth, but could work.

Fix A:  Creating an unbearable fine to any news organizations that make a call ‘or projection’ prior to Hawaii polls closing.  Maybe taking the theater aspect of following the counts away entirely is necessary also.  I, like most people have personally enjoyed following the counts.  But we might recognize it is more important to exercise absolute thoroughness than our personal enjoyment.  Then, one might argue that continuing the immediate counting is most important transparency that could nip unseen vote count changes being made without observation.  ???

Fix B:  Extend Eastern time zone voting hours by 7 additional hours and the other 6 time zones appropriately so all time zones close their polls at the same time.

Again, the Dem’s are obviously betting their whole future on the strategy of stealing and manipulating our election process.  Allowing fraudulent voting as we’ve experienced previously but in a much grander scale is an invitation to take us away to a world we won’t like.  Because we Americans are very used to our freedoms and won’t weather too well in a global community run by unelected, unaccountable global power elitists who know best about everything for everybody in their wonderful world government they call socialism.

It would be great if there were a national campaign in all states to shore up voting procedures to credible, verifiable methods as I’ve stated above.  Perhaps such an endeavor might be called AAV, ‘Accountability in American Voting.’

See: With the Electoral College Every State Matters – 38 sec. Video

It’s About the Voter Fraud, Stupid!

Also see an Aug. 2018 article from Breitbart:  5 Voter Fraud Facts That Could Determine the Midterm Elections

The 5 Fraud Facts in that article: