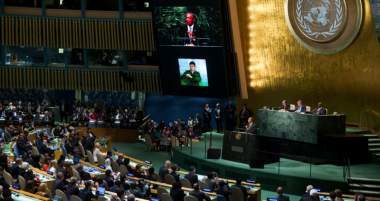 A far-reaching United Nations plot to re-engineer civilization and impose global socialism on humanity, variously dubbed “Agenda 2030” and the “Sustainable Development Agenda,” was ushered in on Friday with a “thunderous standing ovation,” the UN Department of Public Information reported. Every one of the 193 UN member governments on the planet — from communist and Islamist dictatorships to those ruling what remains of the “Free World” — vowed to help impose the UN’s controversial goals on their subjects. Indeed, according to the UN and the global agreement itself, not a single human being will be allowed to escape what one prominent internationalist ominously referred to as the next “Great Leap Forward.”

That the UN Agenda 2030’s 17 so-called “Sustainable Development Goals” (SDGs) and its accompanying 169 targets are essentially a recipe for global socialism and corporatism is hardly open for dispute, as countless analysts have pointed out in recent weeks. Goal number 10, for example, calls on the UN, national governments, and every person on Earth to “reduce inequality within and among countries.” To do that, the agreement continues, will “only be possible if wealth is shared and income inequality is addressed.” The brutal communist dictatorship ruling mainland China even boasted of its “crucial role” in creating the UN agenda. But as the UN document makes clear, national socialism to “combat inequality” domestically is simply not enough — international socialism is needed to battle inequality even “among” countries.

In other words, Western taxpayers: Prepare to be fleeced so that your wealth can be redistributed internationally. Of course, as has been the case for generations, most of the wealth extracted from the productive sector in what remains of the free world will be redistributed to the UN and Third World regimes — not the victims of those regimes, impoverished largely through domestic socialist policies imposed by the same corrupt regimes that will be propped up with more Western aid. More than a few governments and dictators also announced that they would be “aligning their national development plans with the Sustainable Development Agenda,” essentially ensuring a growing supply of poor people to exploit as a pretext for more UN-led global socialism.

The UN document, formally entitled “Transforming our World: the 2030 Agenda for Sustainable Development,” was adopted on Friday, September 25, at the start of the UN’s three-day Summit on Sustainable Development in New York. Speaking at the opening ceremony of the confab, UN Secretary-General Ban Ki-Moon hinted at just how far-reaching the plot really is. “The new agenda is a promise by leaders to all people everywhere,” he explained, presumably conflating “leaders” with mass-murdering gangsters such as Kim Jong Un, Raul Castro, and Robert Mugabe who somehow managed to seize control over entire nations. “It is a universal, integrated and transformative vision for a better world.”

As with all socialist and totalitarian schemes, the UN’s controversial agenda was marketed using vague, meaningless platitudes such as, for example, creating a “better” world, and “ending” poverty — common slogans among tyrants stretching back centuries. “It is an agenda for people, to end poverty in all its forms,” continued Ban. “It is an agenda for shared prosperity, peace and partnership [that] conveys the urgency of climate action [and] is rooted in gender equality and respect for the rights of all. Above all, it pledges to leave no one behind.” But the “true test of commitment to Agenda 2030,” he added, will be in its implementation. “We need action from everyone, everywhere,” Ban said, pointing to the “guide” offered by the 17 SDGs. “They are a to-do list for people and planet, and a blueprint for success.”

“Now,” Ban continued, “we must use the goals to transform the world.” “Institutions will have to become fit for a grand new purpose,” he said. “We must engage all actors, as we did in shaping the Agenda. We must include parliaments and local governments, and work with cities and rural areas. We must rally businesses and entrepreneurs. We must involve civil society in defining and implementing policies — and give it the space to hold us to account. We must listen to scientists and academia. We will need to embrace a data revolution. Most important, we must set to work — now.”

Whether the world’s adults can be persuaded to willingly join the UN’s bandwagon remains to be seen. But when it comes to children, the UN is taking no chances, devoting an entire “goal” in its agenda to ensuring that all children, everywhere, are transformed into what the UN calls “agents of change” ready to push forward the plan for the new global order. “Children and young women and men are critical agents of change and will find in the new Goals a platform to channel their infinite capacities for activism into the creation of a better world,” the UN goals explain.

It all sounded so wonderful to some of the world’s most brutal dictators, though, that they could hardly contain their glee about the coming brave new world. “This agenda promises a brave new world [sic], a new world which we have to consciously construct, a new world that calls for the creation of a new global citizen,” gushed Marxist dictator Robert Mugabe, the genocidal mass-murderer enslaving Zimbabwe who also serves as chairman of the African Union. “I want to believe that we are up to this task that we have voluntarily and collectively committed ourselves to. Our success, and in particular the promise of a new world that awaits us, depends upon this commitment.” He also promised to vigorously impose the UN Agenda 2030 on the starving and impoverished victims his regime lords over.

The brutal tyrants ruling Communist China, meanwhile, have also been enthusiastic cheerleaders for the UN goals — goals that the regime boasted it played a “crucial role” in developing. Among other “commitments,” the dictatorship promised to spend $2 billion in foreign countries to meet the UN goals in “education” and “health,” with its funding increasing to $12 billion by 2030. While only contributing a small piece of the pie — the UN claims its agenda will cost somewhere between $3 trillion to $5 trillion per year — the fact that Beijing is so excited about the agenda is quite revealing. Echoing Chairman Mao’s rhetoric, EU and NATO globalist Javier Solana said that, “With a sustained commitment from all countries, developed and developing alike, the world can ensure that it celebrates another great leap forward in 2030.”

The Obama administration, which apparently does not plan to present the UN scheme to the U.S. Senate for ratification as required by the U.S. Constitution, also offered a forceful defense of the UN agenda. Speaking to the UN summit on Sunday after purporting to commit the United States to the global plot, Obama claimed the UN blueprint “is one of the smartest investments we can make in our own future.” He told the assembled dictators and government representatives that 800 million people live on less than $1.25 per day, without, of course, mentioning the reasons for so much poverty: Big Government policies that are remarkably similar in many ways to the UN’s new agenda. Obama, who has waged multiple unconstitutional wars, also claimed that “military interventions might have been avoided over the years” if governments had only taken better care of their hapless citizens.

Even the world’s leading religious figure, Pope Francis, addressed UN member governments with a plea to support the UN goals. “The adoption of the 2030 Agenda for Sustainable Development at the World Summit, which opens today, is an important sign of hope,” he said. It is worth noting, however, that not everybody within the Catholic Church hierarchy was quite as enthusiastic about the scheme. In their “Common Declaration of the Bishops of Africa and Madagascar” ahead of the UN summit, for example, Africa’s bishops blasted the “agents of the civilization of death” and called for much of the scheming to stop. “We implore you to end the filthy campaigns that promote a civilization of death on our continent,” they said, slamming the “terrifying resurgence of a colonialist spirit under the guise of the appealing names of liberty, equality, rights, autonomy, democratization and development.”

Beyond governments and religious figures, much of the private sector also enthusiastically backed the new goals. Among the mega-corporations backing the scheme are the world’s top three search engines: Google, Microsoft’s Bing, and Yahoo. It was not immediately clear whether those corporations’ support for the UN agenda would affect the supposed impartiality of search results, but critics of the UN plan expressed alarm nonetheless. As The New American reported in May, meanwhile, top media outlets around the world are also participating in a massive propaganda campaign to support the UN agenda.

Of course, Obama has no constitutional or statutory authority to commit the American people to the UN’s radical blueprint for humanity. But unless the GOP majority in Congress is willing to stop funding the administration’s antics, there can be no doubt that the White House will charge ahead using its pen, phone, and taxpayer funding provided by Republican members of Congress. Lawmakers who are serious about their oath of office must work to restrain the Obama administration, and ultimately withdraw the U.S. government’s membership from the UN. Faced with a totalitarian UN agenda for global socialism under the guise of “sustainable development,” now would be an excellent time to get busy.

Alex Newman, a foreign correspondent for The New American, is normally based in Europe. Follow him on Twitter @ALEXNEWMAN_JOU. He can be reached at anewman@thenewamerican.com.

UN Goals for Humanity Target Children as “Agents of Change”

Beijing Boasts of Its “Crucial Role” in UN Plan for Humanity

UN Plotting to “Dramatically Alter” Your Views and Behavior