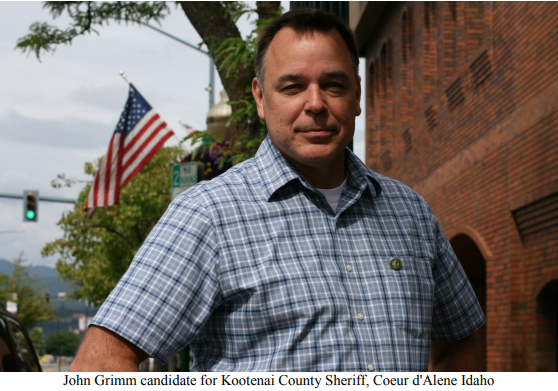 The race for Kootenai County Sheriff has just increased with the announcement of candidate, John Grimm of Hayden, Idaho.  The long time business man and manufacturer has lived in Kootenai County for 15 years, after relocating from Southern California.

Some of his accomplishments include: licensed pilot and aviation enthusiast, advisor to the KTEC – Kootenai Technical Education Campus – Automation and Engineering department annually teaching students how to successfully apply for a job and be a good employee.  Assistant-Scoutmaster and Scoutmaster of the Year awards for the entire Old Missions District teaching wilderness survival & leadership skills to young men.

John and wife Sara, met while they were volunteers with Boy Scout Troop 201, have six children, one son-in-law, and one grandchild.  Sara has worked for the Coeur d’Alene School District for over ten years.

“I have been a member of a reserve deputy program in Idaho; I have Idaho law-enforcement experience.”  Grimm says he has seriously been thinking about running for sheriff since 2012.

What does the 2nd amendment mean to John Grimm?

The prior NRA rifle instructor states, “The Bill of Rights do not grant us anything and nor does it apply to us, it applies to the government.  It is a document restricting what the government can do.  Basically, it’s a whole bunch of here is what you (the government) cannot do.  You can do this, this and this, within these boundaries of restrictions.”

The 26 year business owner feels he can fix the KCSO (Kootenai County Sheriff Office) budget.  The county budget accounts for only about 27 percent of your property tax bill, the sheriff’s budget makes up the largest portion.

“As Kootenai County Sheriff, I will submit an accurate budget.  I will work with our commissioners, build rapport and develop mutual trust and respect.  Spending your hard-earned money is not something I will take lightly,“ states Grimm.

One of Mr. Grimm’s areas of focus is retention and hiring of the KCSO, according to his website www.grimmforsheriff.com.  He says, “The problem is not just wages; it almost never is.  People don’t leave good organizations, they leave bad managers.”

He has a 5 point plan to solve the hiring retention problem: 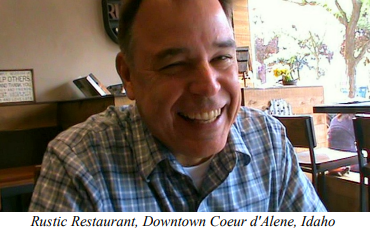 Other key points of his plan are to continually improve both community relations and the safety of Kootenai County, including:

“Something my mother told me when I was a boy; when someone has little to show by way of accomplishments, they tend to focus on how long they’ve been on the job, rather than how effective they’ve been.  Consequently, one of my guiding principles is: Any job worth doing is worth doing well.”