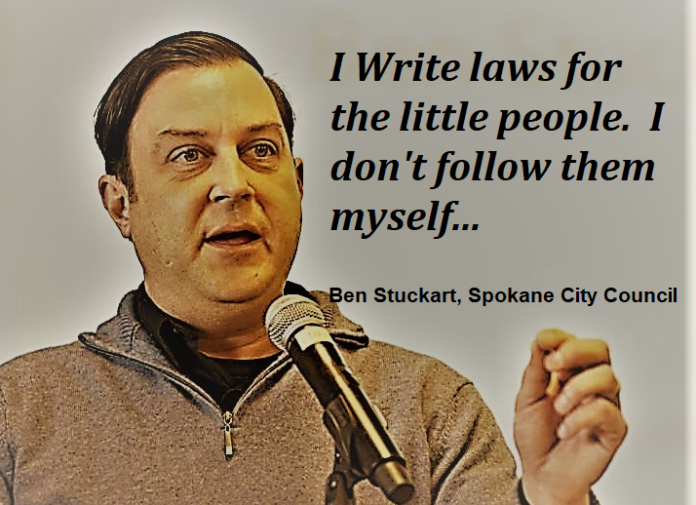 As far as we know, this isn’t a direct quote, but it is clearly indicated by Stuckart’s own behavior. 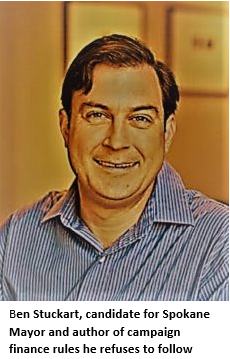 Spokane City Councilman Ben Stuckart is running for Mayor in 2019.  He launched his campaign in 2016 when he first filed his official registration with Washington State’s Public Disclosure Commission (linked here for current version).  He also has claimed to support stricter enforcement of the state’s campaign finance laws (RCW 42.17A) and he helped promote and write new local ordinances to imitate Seattle’s local campaign finance bureaucracy experiment (called the Seattle Ethics Elections Commission or SEEC).  Stuckart was able to convince the Spokane City Council to pass this Seattle-style law as Spokane City code 1.07 (see here).  Primarily the law reduced the legal maximum amount someone could donate to political campaigns, and targets private businesses and citizens while generally exempting unions from the same rules.  The law officially went into effect on February 7, 2018.  Now, Stuckart, who has raised over $10,000 so far in a field of seven declared candidates, appears to be the first candidate to violate the very law he wrote. 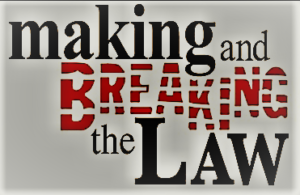 Yesterday, this author filed an official complaint with the Public Disclosure Commission (PDC) against Ben Stuckart for violating Washington State’s Fair Campaign Practices Act (RCW 42.17A) (complaint linked here).  This is the 412th complaint filed with the PDC by this author since 2016 (see here for a list of politicians, judges, unions, PACs, and others who have been fined or exposed by this author for violating the state’s wonderous campaign finance laws).  Stuckart’s violations consisted of failing to report a significant in-kind contribution to his Spokane Mayoral race from the “Yes on Public Safety PAC” (linked here) when they prominently featured a photo of him on their 30,000 piece mailer a few weeks ago (see image nearby).  Additionally, this unreported contribution exceeds the maximum campaign contribution limits which Stuckart just wrote and signed into law in Spokane last year (and which just went into effect last year).  Stuckart’s illegally unreported in-kind contribution also exceeds the state maximum contribution limits. 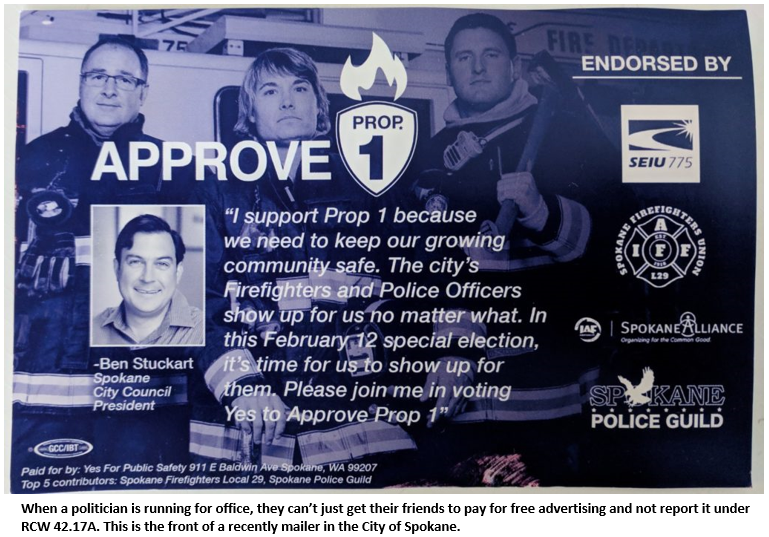 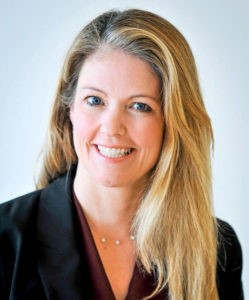 Snohomish County Judge Cindy Larsen committed almost identical violations of RCW 42.17A, and was fined $2000 by the Washington State AG in 2017

The “Yes on Public Safety PAC” is funded by two unions and one individual.  The PAC was formed last year to support the proposed property tax increase on the Spokane City ballot special election held on February 12, 2019.  The two biggest organizations funding the PAC are the Spokane Firefighters and the Spokane Police Guild (linked here).  They are joined by a third donor – Ben Stuckart’s legislative aide named Adam McDaniel (linked here – Schedule B) who is employed by the City of Spokane and works directly for Ben Stuckart.  This PAC also broke the law (RCW 42.17A.320(2)(b)) when they failed to disclose Adam McDaniel’s $1,000 in-kind “consulting” contribution to the campaign (which he calls “McDaniel Projects” to hide his name from easy search results on the PDC website) as one of the top five contributors on their mailers and other election communications as required by law.  This resulted in a separate complaint by this author against this PAC (linked here). 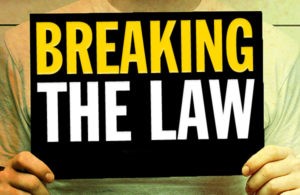 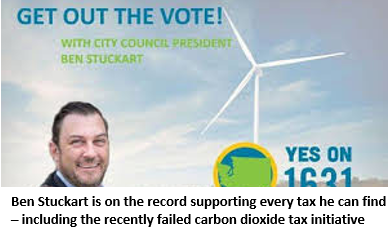 The Spokane Firefighters Union has a long and colorful history of breaking the state’s campaign finance laws in the City of Spokane.  They founded a PAC called “Spokane for Honest Government PAC.”  This PAC wasn’t very honest and was fined $50 for violating disclosure laws in 2016 (linked here).  More recently, they were fined $10,000 ($3,000 suspended) by the PDC (see original complaint linked here, and official fine linked here).  This fine was a result of their attempt to hide $94,000 worth of unreported independent expenditures promoting big tax candidates. 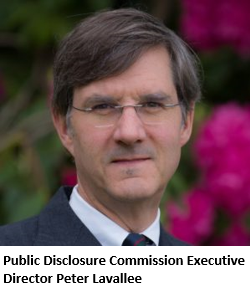 Once the PDC issued this $10,000 fine, the firefighters attempted to dissolve the PAC in a willful effort to avoid paying the fine.  This prompted the PDC Executive Director in an unusual move to send them a formal letter on December 15, 2017 indicating they would all be held personally responsible for paying the fine if they persisted in their effort to avoid responsibility (linked here).  The Spokane Firefighters then scrambled to raise the funds to pay the fine, but they failed to report who covered their fines to the PDC again.  To obtain a modicum of transparency, this author filed another complaint (linked here) which forced them to disclose their previously secret donors. 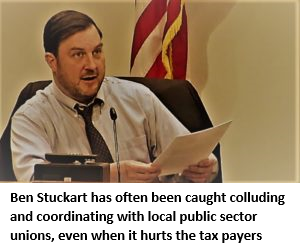 Ben Stuckart is also involved in many shady actions to collude with the Spokane Firefighters Union in an effort to ensure they support his political campaigns by forcing City of Spokane tax payers pay a premium for the services the Spokane Firefighters provide.  For example, in 2014, Councilman Stuckart illegally provided internal, confidential legal documents to the Spokane Firefighters Union which was a clear violation of the City of Spokane’s ethics rules.  In fact, it is just illegal behavior. A complaint was filed against Stuckart, the city attorney recommended legal action against Stuckart, and Stuckart was ultimately fined $250 for this action on February 19, 2015 (see final report and fine here). 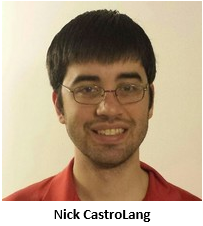 Additionally, in preparation for Stuckart’s current campaign for Mayor of Spokane, another sketchy local political player named Nick Castrolang , on December 16, 2014 created a PAC called “Spokane Citizens for Political Education PAC” (see here).  The sole purpose of this PAC appears to have been to raise money to pay for a $12,400 poll in the City of Spokane to see how well Ben Stuckart would fare in a mayoral race.  The PAC was mostly funded by the Spokane Firefighters Union and a few other public sector unions.  The PAC violated various campaign finance laws by failing to timely file reports, deposit funds, or even report how these funds were spent.  This author also filed several complaints (linked here and here).  The PDC has been very slow to resolve these complaints, but the facts are clear.  This was a sloppy, secret, amateur slush fund established to help Ben Stuckart with his future mayoral campaign.

For further background on this PAC, Nick Castrolang is the son of Jim Castrolang, an odd pastor/priest at a “Progressive” church in Colville, who recently settled a lawsuit (initiated by a PDC complaint filed by this author linked here) for his own illegal campaign finance activities while he was treasurer and executive director of the Spokane County Democratic Central Committee.  Jim Castrolang filed fraudulent documents in the name of the previous treasurer, hid overlimit contributions from unions and tribes to the SCDCC, hid the secret salary he paid himself from SCDCC funds, and helpfully drained the Drumheller Scholarship fund to pay for epic parties (see here).  While Jim Castrolang was only fined $1500, his illegal escapades resulted in an $85,300 total settlement with the Washington State Attorney General’s office (see settlement here, Jim Castrolang’s settlement here, and a more detailed story on this issue linked here). 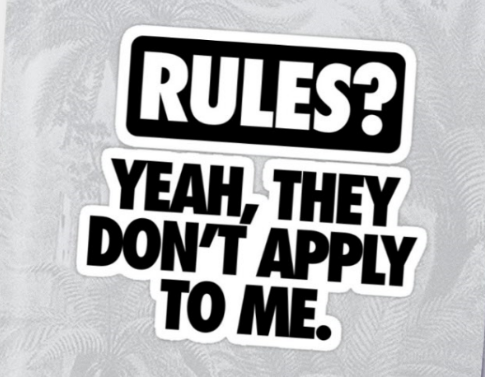 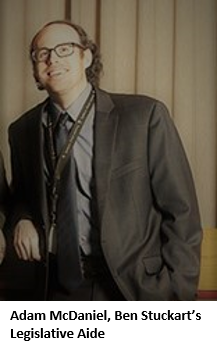 Despite his shady actions and questionable background on the subject, Stuckart pretends to be a campaign finance reformer.  He has even convinced local opinion blogger Shawn Vestal to believe him and write glowing articles (linked here and here) which parrot Stuckart’s claims.  In one of these blogs, Vestal quotes Stuckart’s legislative aide Adam McDaniel justifying why a $500 maximum contribution limit is really the miracle solution for political campaigns in the City of Spokane.  The truth, of course, is that these limits are proposed to protect entrenched and corrupt local incumbents from potential political challengers.  While Stuckart and McDaniel championed, wrote, and passed this law with these restrictions, neither of them chose to follow it themselves, and quickly broke their own rules within months of the law going into effect last year.  Stuckart accepted in-kind contributions FAR in excess of the $500 limit he claimed was enough, and McDaniel immediately made a $1000 in-kind contribution to that same PAC giving the over limit contribution to Stuckart.  Don’t expect their local cheerleader Shawn Vestal to criticize them for this hypocrisy.

Unfortunately, this is how the game is played in Spokane.  Political insiders write restrictive rules for everyone else, and then break the law when it is convenient for them.  Despite the PDC slapping their wrists on occasion, and the AG playing pat-a-cake with lawsuits when forced to do so, the insiders know this is just the price of admission.  Minor fines and major hypocrisy define their political careers, but they count on a tame local media to water down the truth or ignore their actions.  However, not everyone chooses to remain ignorant and this level of collusion, corruption, and incompetence can’t last forever. 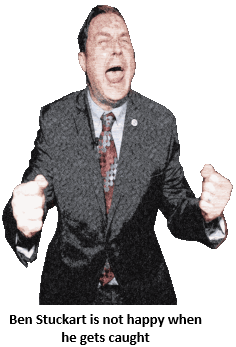 Spokesman Review – Oct 31, 2017 – “PAC fueled by Spokane firefighters’ money should clean up or get out of local politics” (Shawn Vestal)

Dec 15, 2017 letter from PDC Director Peter Lavalle to Spokane for Honest Government PAC demanding they follow the law and pay their fine.

The Inlander – April 17, 2017 – “Unreported poll previewed a Condon vs. Stuckart mayoral battle than never was”

Published with Permission of Wethegoverned.com