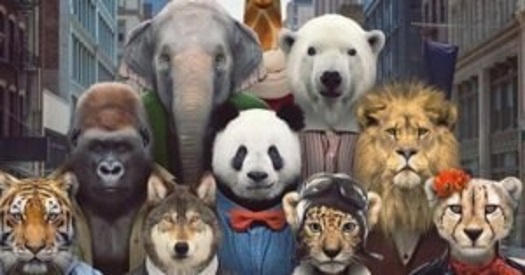 Oregon State University is offering a degree program called, “Global Trophic Cascades.”  The program ushers in a new low in educational standards as students will now be focusing their instruction entirely on ideology rather than sound natural resource management science.

Graduates of the new program, which is part of OSU’s College of Forestry, will undoubtedly be able to produce their own wildlife fantasy films touting the miraculous ability of large predators to change rivers, halt climate change, and bring peace on earth.

When it comes to wildlife management, especially in regards to “endangered species,” it is vitally important that decisions are based on sound science and empirical facts.  The field of study known as “conservation biology” is heavily reliant on the theory of “trophic cascades”, which is defined as the top-down regulation of ecosystems by large predators.  Conservation biology is a worldview that is woefully short on science and heavy on value laden beliefs.  Conservation biologists are not “scientists” in the strict sense of the word, but are advocates working to achieve a particular outcome.

Conservation biology can best be described as a theory of regeneration, much akin to the theory of evolution.  It is not a stretch to say that conservation biologists are driven by a quasi-religious political agenda which allows them to rationalize forgoing the disciplines and constraints of traditional science.

According to OSU professor of ecology William Ripple, a border wall between the U.S. and Mexico will harm a multitude of animal species by fragmenting their geographic ranges.

Radical environmental groups fond of suing the government over wildlife management and land use decisions, (such as the Center for Biological Diversity), often base their legal arguments on “trophic cascades” theory.  Judges deemed proficient in the law can be swayed by stacks of university studies and eye-catching computer models backed by impressive sounding wildlife narratives which are often comprised of nothing more than smoke and mirrors.  Most judges are simply not competent to dissect reams of carefully selected data and discern valid empirical scientific evidence.

“Conservation biology was originally articulated by the early pioneers as a “crisis discipline” where certain types of normative concerns were at the forefront. In fact, many have likened it to medicine insofar as it has ethical foundations. In the medical case, it would be the well-being of patients and in conservation biology it is the conservation of biodiversity.”  – [The Stanford Encyclopedia of Philosophy]

Disciples of conservation biology believe that biodiversity is the supreme law of the land which must be promoted and protected at all costs.  Unfortunately, only they and their minions are competent to define what constitutes balanced ecosystems and a healthy environment.   This self-serving elitism allows them to pick and choose data sets, create computer models, and produce impressive sounding narratives that support their agenda while data that may be contrary or problematic to achieving their desired goals is ridiculed or ignored.

Ironically, even one of the early founders and foremost advocates of “trophic cascades”, L. David Mech, has distanced himself from the dubious assumptions of his own theory.  As I pointed out on this blog page six years ago, Mech’s article entitled, “Is science in danger of sanctifying the wolf?”  questions many of the popular tenants of “trophic cascade” theory.

Mech points out, and rightfully so, the danger of making natural resource and wildlife management decisions based on popular opinion or faulty perceptions.  While Mech has been one of the leaders in promoting wolf recovery, he now warns that the preponderance of positive, and in some cases faulty scientific studies and mass media marketing, have contributed to a distorted view of the wolf and its impact on the environment.  Mech concludes that all of the so-called “evidence” supporting the positive cascading effects of wolves on the environment may be wrong!

Producing a generation of conservation biologists and wildlife “professionals” that believe they have a mandate to force their agenda on the entire world is wrong also.  Shame on you OSU!