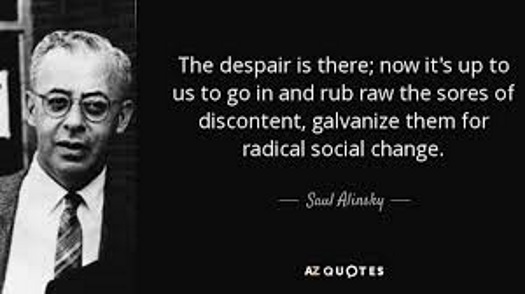 The Democratic Party agenda appears to come from Sal Alinsky’s book, “Rules for Radicals” which he dedicated to Lucifer (Satan). His rules are transforming America from a Constitutional Republic to a Socialist/Communist country. Obama quoted him often. Hillary Clinton did her thesis on Alinsky.

Alinsky’s three main rules are: Polarization where people are divided like rich versus poor, black versus white, etc.; Demonization where those opposed to ObamaCare, same sex marriage, gun control, etc. are demonized by the mainstream media and Deception where any lie and/or half-truth are used to prevent the confirmation of a pro-Constitutional Supreme Court Judge, lie about Trump’s non-existent Russian collusion and lies to sell ObamaCare. The end justifies the means. These rules have been the strategy for bringing more socialism and control over our lives.

The several levels of control to create a socialist/communist State are as follows:

Healthcare: Control healthcare and you control the people! ObamaCare is doing that! The Federal government will soon control all healthcare.

Poverty: Increase the number of people who depend on government. Allow illegal aliens to vote and get free health care. Poor people are easier to control and will vote for their welfare checks.

Debt: Increase the National debt to an unsustainable level. Spend money to implement the welfare State. This increases taxes and produces more poverty.

Gun Control: Create a police State by removing the ability of citizens to defend themselves from the Federal government.

Welfare: Take control of every aspect of our lives. The Communist controlled United Nations Agenda 21 to control everyone is being implemented by the EPA and other agencies. Note: The man-caused global warming hoax is opposed by over 31,000 US scientists including over 9,000 Ph.D.’s

Religion: Remove faith in God and Christian beliefs like the Ten Commandments from schools and government institutions. Note: The Supreme Court without prior rulings ban prayer and Bible reading in 1962 & 1963.

Other Communist/Socialist goals are to: Destroy our Christian culture by allowing migrants and illegal aliens who will not assimilate and want to impose their culture on American; Destroy the morality of the nation; Promote trade agreements like the pending United States, Mexico, Canada (USMCA) agreement that destroys our jobs, economy and our independence; Promote a Constitutional Convention to destroy our rights and limitations on government.