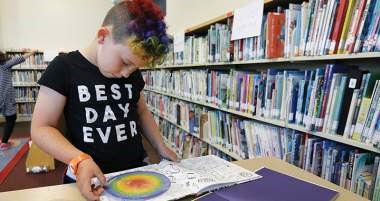 LOS ANGELES — Over one in four California children ages 12 through 17 now identifies as “gender non-conforming,” according to a recent study by the University of California, Los Angeles (UCLA). In other words, more than a fourth of the state’s boys do not accept the fact that they are male, and similar numbers of girls refuse to accept being female. But if policymakers in the Golden State get their way, this is only the beginning of another revolution that will make the “Sexual Revolution” seem tame by comparison. And they are getting their way — and then some.

In early May, the state’s Board of Education approved a new “Health Education Framework” for kindergarten through 12th grade that should shock even the most liberal and “progressive” parents. From teaching children that there are infinite genders, to how-to manuals on sexual perversions so dangerous and obscene they cannot be described here, there seem to be no moral boundaries or taboos that are not being deliberately broken.

The Lesbian, Gay, Bisexual, Transgender, Queer, Intersex + (LGBTQI+) agenda is being infused into the entire curriculum from the earliest years. That is despite the fact that the respected American College of Pediatricians (ACP), a group of 500 pediatricians that offers a conservative alternative to the much larger American Academy of Pediatricians, has referred to exactly this sort of propaganda being foisted on children as “child abuse.” In California and beyond, this abuse is now being systematically inflicted upon children by out-of-control politicians, bureaucrats, and sexual deviants. And the consequences are going to be disastrous, experts say.

Perhaps the best illustration of the perversion that permeates the Health Education Framework are the books being promoted within. These resources, aimed at children at every level from kindergarten to high school, are mind-blowing. That they would be recommended by government for anyone — much less schoolchildren — would have been unthinkable just a few years ago.

In kindergarten, for instance, the Health Education Framework recommends a book entitled Who Are You? The Kid’s Guide to Gender Identity. The cover features a boy wearing a dress. Recommended by the state government for children in first grade and kindergarten, the book claims to provide “a straightforward introduction to gender for anyone aged 4+.” And yet, the contents of the book show it is not appropriate for anyone except perhaps sociologists trying to understand madness — certainly not for children who still hardly know their ABCs.

Its main purpose is actually to convince children that male and female are obsolete, and that there are potentially infinite genders. It lists a wide array of examples, including “trans, gender-queer, non-binary, gender fluid, transgender, gender neutral, agender, neutrois, bigender, third gender, two-spirit,” and more. The book also claims, among other absurdities, that grown-ups must “make a guess” about what gender babies are “by looking at their bodies.”

That book is recommended right after the framework begins its indoctrination of children into gender confusion. One chapter in the Health Education Framework explains to teachers how they ought to teach “sexuality” to kindergarten children. “Discuss gender with kindergartners by exploring gender stereotypes and asking open-ended questions, such as what are preferred colors, toys, and activities for boys/girls, and then challenging stereotypes if presented,” it reads.

Then, the teacher should continue to confuse the children. “Throughout this discussion, show images of children around the same age who do not conform to typical gender stereotypes,” the instructions read. “Examples do not have to be exaggerated or overt. Simple differences, such as colors or toy preferences, can demonstrate acceptance of gender non-conformity.”

Another controversial book recommended under the Health Education Framework is called Changing You!: A Guide to Body Changes and Sexuality by Gail Saltz. This book, recommended for kindergarten through third grade, includes close-up “cartoon” illustrations of adult and children’s genitalia that have been widely condemned as child pornography. Also included are drawings of sexual intercourse.

In California, students have even had child rape added into the program under LGBTQI+ history mandates. In a video obtained by this writer, Brea Olinda Unified School District (BOUSD) Assistant Superintendent of Curricula Kerrie Torres explains that it is “really important” to teach children about pedophilia and pederasty in the classroom because it is a “sexual orientation.” The remarks came in response to a question from a parent about why children were being taught pedophilia.

“This is done because we are talking about historical perspectives of how gender relations and different types of sexual orientations have existed in history,” Torres tells the concerned mother, perhaps unaware that she was on camera. A lesson plan also obtained by this writer revealed that child rape was being taught in a presentation about the history of sexual orientations, with a reference to ancient Greece. After the uproar, school officials told The New American that the slide was removed. But homosexual-activist-turned-politician Harvey Milk, who raped multiple underage boys, is still portrayed as a hero throughout the state of California.

Naturally, opposition to the extremism has been growing. The group Informed Parents of California has helped lead the charge. “Informed parents, families and faith leaders across California demand the rejection of the so-called ‘Health Framework,’” said Stephanie Yates, co-founder of Informed Parents of California, before the radical sex-ed standards were approved by the state board. “It’s down-right sickening. It’s dangerous. It’s reckless, and it will destroy our children’s physical, emotional, and mental health.”

The group organized rallies at the Capitol. And it organized a massive SeXXX Ed sit out in February to protest, with parents keeping their children home from school. The alliance consisted of a diverse coalition of parents including evangelicals, Catholics, Jews, Mormons, Muslims, and even some nonbelievers. The goal was to express outrage over “highly graphic, state-mandated sex education and gender identity lessons in public schools,” said Informed Parents of California, calling for the madness to be stopped.

The extreme sexualization, perversion, and confusion of children has sparked an especially fierce wave of outrage among Hispanic communities, many of whom are Catholic and hold stronger family values than the far-left political class. A number of Latino parents even accused the state’s education bureaucracy of “racism” for attempting to conceal the extremism from Spanish-speaking parents.

Hispanic leaders noted that the Education Department failed to make the Health Education Framework available in Spanish, even though almost a third of households in the state are Spanish-speaking and even though it normally makes other materials available in Spanish. That likely meant that the education establishment was trying to deny the parents the opportunity to have a say in what their children would be taught.

“They have lost our trust with this framework, it goes against our values as parents,” Alfred Cuellar, a concerned father in Anaheim, told The Newman Report at FreedomProject.com, blasting medically inaccurate information. “This is a direct attack on the family, on laws established by God that marriage is between a man and a woman. This should not be accepted in our schools. Our children are not a political field. Teaching minors about transgenderism is illegal…. Our children should not be an experiment.” A dozen concerned parents echoed the outrage in comments sent to this writer, with some threatening to withdraw their children from government schools entirely.

But despite the outrage, California officials have made abundantly clear that even individual opt-outs from the indoctrination are not permitted under state law. Orange County Board of Education General Counsel Ronald Wenkart said it plainly in a memo: “Parents who disagree with the instructional materials related to gender, gender identity, gender expression and sexual orientation may not excuse their children from this instruction.”

Officials explained the same thing on government websites aimed at parents. “As stated in Education Code 51932(b), the opt-out provision of the California Healthy Youth Act does not apply to instruction or materials outside the context of sex education, including those that may reference gender, gender identity, sexual orientation, discrimination, bullying, relationships or family,” the Orange County Department of Education explains on its website. Parents are allowed to tell their children they disagree with the material, but that is as far as their rights extend if they continue sending them to government schools.

As mentioned previously, surveys show over 25 percent of California children aged 12 through 17 are “gender non-conforming,” according to UCLA data. And some studies show as many as 20 percent to 50 percent of American young people identify as LGBTQI+. In some nations such as Sweden, where the indoctrination is most extreme, experts have revealed that the number of “transgender” children is doubling every year. And under the HEF, that trend is expected to accelerate across California, too.

Family Research Institute Chairman Dr. Paul Cameron, one of the leading academic researchers in the field, offered a stark warning. “Because sexual tastes are learned, given the right circumstances and the right time, in just about any society or family, some will acquire homosexual desires,” he told The New American magazine. “While about a quarter of acquisitions can be traced to molestation, the bulk seems happenstantial — seeing or hearing something that plants an idea that somehow grows into homosexual desire.”

“Clearly, the more the notion is fertilized, the more likely an LGBT outcome becomes,” he continued, warning that the LGBT threat is now international in scope. “Getting informed of homosexuality by a cartoon, or a classroom lecture, is probably ‘enough’ to turn a few children (out of millions) toward homosexual desire. Obviously, with repetition and fertilization, ‘a few here and a few there’ starts a process that partially explains the tripling of homosexuality in high school youth over the past three decades.”

Dr. Cameron was raised in California. But back then, he had not heard the word “queer” until middle school. Today, it is ubiquitous, down to the earliest ages. And this will have profound repercussions. “The new curriculum will create many thousands of LGBTs in the California school system,” he explained. “And while most kids who ‘turn LGBT’ will probably come from troubled or liberal homes, some will come from conservative or deeply religious families due to the odd events that influence human sexual desire.”

As a result of the outrage, state officials claimed that some of the objectionable material referred to in this article was removed from the HEF prior to final approval. However, the latest versions of HEF available on the Department of Education’s website still show the material. And even if it is true that some was removed, the fact that it was in there to begin with illustrates how dangerous the education establishment has become to America’s children.

Of course, California’s new Health Education Framework is just the tip of the iceberg when it comes to the insanity that now permeates the government education system in America. To learn more about what is happening in public schools across the country, please read this magazine’s February 4 Special Report on education, or try to attend one of the many presentations on this topic that will be given around the country. (See the article on page 25).

Americans must take urgent action to rescue their children, or the consequences will be practically inevitable and absolutely catastrophic. Time is running out.

This article originally appeared in the June 17, 2019 print edition of The New American. The New American publishes a print magazine twice a month, covering issues such as politics, money, foreign policy, environment, culture, and technology. To subscribe, click here.