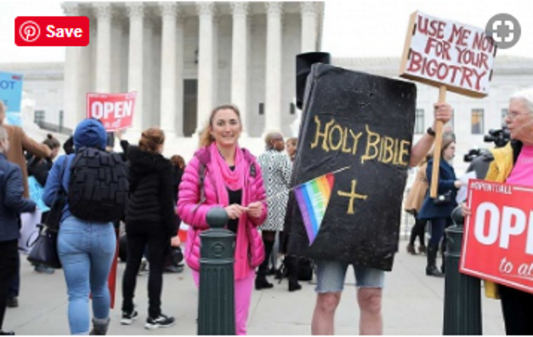 To most people, helping orphans and children in the foster system find stable homes seems like a top priority — the kind of priority that transcends politics and ideology. Unfortunately, however, those vulnerable children are quickly losing their advocates — and their hope for a stable, loving family — because of rampant anti-religious bias in American society today.

In the United States, more than 400,000 children in the foster system are waiting for homes. Around 4% of children are adopted within a year of entering foster care, and 85% of children in foster care have at least two placements in their first 12 months. Eighty percent of prospective foster parents who work with the state drop out within two years. All this adds up to the terrible reality that a massive number of children are spending crucial years of their lives without a stable home environment. The foster crisis is so extreme that some states are hosting foster children in hotels and office buildings because there is nowhere else to place them.

The foster crisis is so extreme that some states are hosting foster children in hotels and office buildings because there is nowhere else to place them.

Despite this, however, several state governments — spurred on by LGBT activist groups — are seeking to shut down some of the most effective foster care and adoption providers in the country. The reason? These providers believe that children do best in homes with a married mother and father, and they want to place children into those environments. And though the Constitution guarantees the right to live and work in accordance with our deeply held beliefs, state governments across the nation are determined to punish religious groups, even if it means hurting vulnerable children.

Same-sex couples and unmarried couples have plenty of options when it comes to fostering or adopting a child. Every state has identical requirements for opposite-sex and same-sex couples, and even LGBT advocacy groups admit that there are no state-level restrictions against same-sex couples fostering or adopting. In some states, however, private foster care and adoption providers are permitted to prioritize placement with married, opposite-sex couples if their reasons for doing so are based in religious convictions. And that, say the LGBT activists, is intolerable.

Many state governments are so cowed by political dogma that they are increasingly willing to compromise foster children’s best interests and shut down religious providers — even if there are laws specifically protecting them. In 2015, Michigan passed a law protecting the rights of faith-based foster care and adoption providers to operate consistently with their religious beliefs. But Michigan Attorney General Dana Nessel, who took office this year, has violated that law, promising to cut off funding from faith-based providers that want to place children with a married mother and father.

This is anti-religious hostility, and it is similar to what the U.S. Supreme Court condemned in its ruling in Masterpiece Cakeshop v. Colorado Civil Rights Commission. In that case, the Supreme Court found that the state of Colorado had acted with unconstitutional hostility toward cake artist Jack Phillips, and it required the state to cease its hostile actions.

Catholic Charities West Michigan, represented by Alliance Defending Freedom, has filed a lawsuit against the Michigan attorney general’s discriminatory decision. The lawsuit argues that there are many providers, including state-run providers, who are happy to place children for foster care and adoption with same-sex couples and unmarried couples — so allowing faith-based organizations to place children consistent with their religious beliefs only increases the number of available homes for children.

Religious foster care and adoption providers play a unique role in society. These faith-based organizations are often the best at finding homes for children in particularly challenging situations, such as groups of siblings, older children, and special-needs children. In fact, in 2016, 45% of the children adopted through Catholic Charities had special needs — a number that vastly outstrips the national average.

Eliminating religious foster care and adoption agencies because of anti-religious bias cuts off thousands of children  from a permanent home. That is not simply the logical conclusion; it is what has actually happened in other parts of the country where anti-religious hostility has succeeded in shutting down religious adoption organizations. Catholic Charities has already been driven out of Boston, Washington, San Francisco, Buffalo, and the entire state of Illinois — with devastating results for children. For example, in Illinois, the shutdown of Catholic Charities drove thousands of foster parents out of the system and led to roughly 3,000 children being displaced.

Even though religious freedom is protected by the Constitution, right now it is under vicious assault from leftist activists and state governments.

Those children are real, tangible victims of an anti-religious bias that is rampant in American society today. ADF is representing other faith-based adoption organizations facing closure due to government-sanctioned discrimination. In New York, New Hope Family Services has been targeted by state officials because it prioritizes placing children in homes with a married mother and father. The state has threatened to shut down New Hope’s adoption program completely if it seeks to uphold its religious principles — even though New Hope has never accepted a dollar in state funding. It receives all of its support from churches, private sources, and fees paid by adoptive families. Shortly before attempting to shut it down, the state actually sent New Hope a letter praising it for the strength of its adoption program.

Adoption providers are not the only groups facing relentless anti-religious bias. Private businesses, like Country Mill Farms in Charlotte, Michigan, have been expelled from the marketplace and banned from selling their produce because of the owners’ religious beliefs. After Country Mill’s owner posted a statement of his Catholic beliefs about marriage on Facebook, East Lansing, Mich., city officials banned his family farm from participating in the city-run farmer’s market. It even modified its market policies to specifically target Country Mill and exclude the farm from the market. Following a lawsuit by ADF, a federal judge issued a preliminary ruling requiring Country Mill Farms to be reinstated while the case continued.

But many other businesses and business owners have not been so fortunate. Barronelle Stutzman, the owner of Arlene’s Flowers in Richland, Washington, was targeted by her state’s attorney general and sued in her personal capacity after she respectfully declined to create custom floral arrangements to celebrate a longtime customer and friend’s same-sex wedding. The ACLU also sued her in her personal capacity. And now, after a second adverse ruling from the Washington Supreme Court, Stutzman is still at risk of losing her business, her retirement, and her personal assets. She has appealed to the U.S. Supreme Court again.

Even though religious freedom is protected by the Constitution, right now it is under vicious assault from leftist activists and state governments. And this is not merely a contest of ideas; the stakes in the real world are terribly high, and the collateral damage is devastating. America is based on the principle of allowing everyone to live and work in accordance with their conscience, and when we start violating that principle and seeking to eliminate religious liberty simply because we don’t agree with each other, the most vulnerable among us suffer.