Whoa. Millennial embrace of LGBTS dropping like a rock 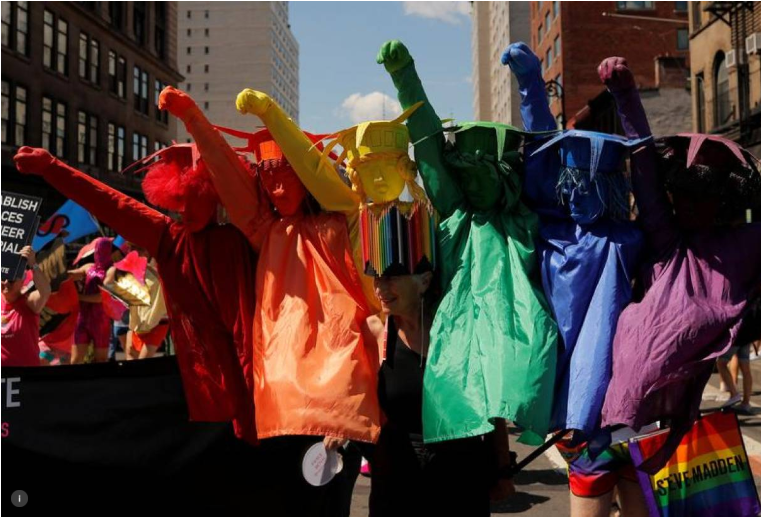 Whoa. Millennial embrace of LGBTS dropping like a rock

America is rapidly falling out of love with the radial LGBT movement. And guess who is leading this wave of disaffection? Millennials aged 18-34.

Big Gay is non-plussed. Said the New Civil Rights Movement, “Days before the nation’s 50th anniversary of the Stonewall Riots and the start of WorldPride in New York, a new study is measuring American attitudes toward LGBTQ people – and the results aren’t stellar.”

The chief complaint: the youngest Americans are getting woke on the abnormality of deviant sexuality. “Importantly, however, this year’s Index found the number of young Americans ages 18-34 who are comfortable across all seven (social) scenarios dropped from 53% to 45%, the second consecutive year that this age group has shown a drop.”

This runs completely counter to the theory that the problem with accepting the LGBT lifestyle is with old-fogeys who just can’t get with the times, and want to yell at gays and tell them to get off the lawn.

But the reality is quite different, and quite disturbing for a fan of all things homosexual. This plunge in social affirmation for sodomy is not due to isolation: a full 75% of millennials know a gay or lesbian person, probably a much higher percentage than among senior citizens, for example.

The bottom line: the more millennials get to know homosexuals, the less they like homosexuality.

The explanation for the plummeting acceptance of homosexuality among millennials has a simple and straightforward explanation: they have had sexual abnormality shoved in their faces for their entire lives. Their noses have been rubbed in it starting in kindergarten right through college. They have been told that anyone who is not prepared to whole-heartedly embrace homosexuality is an evil person, a hater, a bigot, an intolerant lout, and the incarnation of the spirit of Adolf Hitler.

(Hitler did, by the way, put homosexuals to death. But not all homosexuals, only the effeminate ones. Masculine homosexuals were recruited to serve in the S.A., the Stormtroopers who served as Hitler’s enforcers. It was impossible for a soldier to get promoted in the S.A. unless he was a homosexual.)

More and more homosexuals in the typical millennial’s world are coming out of the closet, and doing so in a flamboyant way. They are are out, loud, and in everybody’s face. Thus millennials have had more up close and personal interactions with unrepentant homosexuals than anybody on planet earth. And increasingly, they do not like what they see.

Millennials are becoming woke to the fact that many homosexuals are not “gay” (as in “happy”) at all, but are angry, aggressive bullies who would sooner send a Christian baker to prison than buy a cake from the bakery down the street.

The embrace of homosexuality as a lifestyle among millennials has plunged for three years running. In fact, it’s the only demographic in which this is true. Support for the homosexual lifestyle is steady everywhere else, propped up by a sycophantic media that gushes over gayness every chance it gets.

But millennials know better because they have to live and work with out, loud, and proud homosexuals. Consequently, the number of non-gay millennials who are comfortable with homosexuals in a variety of personal situations dropped in the last year from 53% to 45%. This continues a pattern of continuing erosion. The most pronounced drop is among females, whose comfort level dropped 12% in one year, from 64% to 52%.

This is truly remarkable, that half of millennial females in American are growing increasingly uncomfortable with homosexuality as a lifestyle.

This trend is especially true in “personal situations.” Today, in 2019, 36% of millennials are not comfortable when they learn a family member is homosexual (the figure is 43% among males), perhaps because they are observing the pathologies associated with homosexuality up close. Last year, just 29% were uncomfortable, a dramatic lurch in just one year.

Increasingly, government schools have become little more than indoctrination camps for impressionable young minds. But an amazing 42% of millennial males – and 40% of females – are uncomfortable learning that their child has had a lesson on LGBT history at school or has a homosexual teacher. That’s up from 27% a scant two years ago.

The pro-homosexual CEO of Harris Poll says, “We count on the narrative that young people ae more progresive and tolerant. (So) these numbers are very alarming, and signal a looming crisis in discrimination.” Or, perhaps, better a “looming awakening about the pathology of homosexuality.”

GLAAD president Sarah Kate Ellis revealed more than she realized when she pointed out that the numbers reflect the fact that younger Americans interact with more LGBT individuals, and a more diverse blend of LGBT populations.

She’s right. Millennials have seen more than most Americans about the LGBT lifestyle in action. And they don’t like what they see.