Time for a Federal Takeover of Portland, Oregon 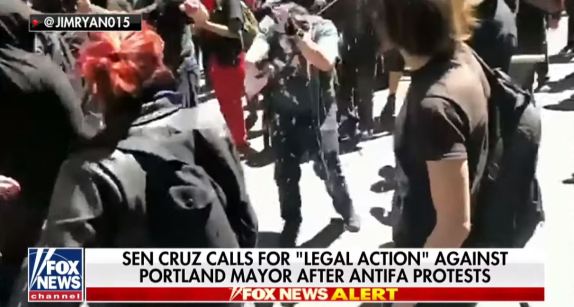 Time for a Federal Takeover of Portland, Oregon

MAGA folks and the few members of the establishment media who are not compromised members of the Far Left will recall the many times during and after the 2016 campaign that supporters of Donald Trump have been assaulted by Democrats and Antifa, the Democratic Party’s paramilitary wing.

These assaults have often been dismissed on the basis that somehow the Trump supporters incited the violence by wearing a MAGA hat, a Trump T-shirt or engaging in some other non-violent act in the exercise of their First Amendment rights.

However, federal authorities have been warning state and local officials since early 2016 that leftist extremists known as “Antifa” had become increasingly confrontational and dangerous, so much so that the Department of Homeland Security formally classified their activities as “domestic terrorist violence,” according to interviews and confidential law enforcement documents obtained by POLITICO and published back in September of 2017.

Those documents disclosed that by April 2016, authorities believed that “anarchist extremists” were the primary instigators of violence at public rallies against a range of targets. They were blamed by authorities for attacks on the police, government and political institutions, along with symbols of “the capitalist system,” racism, social injustice and fascism, according to a confidential 2016 joint intelligence assessment by DHS and the FBI.

A senior state law enforcement official quoted by POLITICO’s Josh Meyer said, “A whole bunch of them” have been deemed dangerous enough to be placed on U.S. terrorism watch lists.

This past weekend in Portland, Oregon these Far-Left terrorists crossed a new line by assaulting journalist Andy Ngo, sending him to the hospital with a brain bleed and other serious injuries.

Nicole Russell of the Federalist, reports Ngo, who is gay, has written for center-left outlets like Quillette and right outlets such as The New York Post, immediately received intense empathy from many on the right, including Federalist senior contributor Chad Felix Greene, who began tagging people and spreading the word, to tweets from Ambassador Richard Grenell, an openly gay member of the Trump administration, expressing outrage and sympathy.

However, Ms. Russell documented that some high-profile liberals (including those associated with Hillary Clinton) began tweeting that Ngo deserved this outcome since he regularly exposes Antifa’s antics, even though this clip from Ngo shows how, just before he’s beaten, Antifa begins to antagonize him by circling like vultures.

In addition to Andy Ngo, Adam Kelly was also viciously and brutally attacked this past weekend in Portland by Antifa. As was the case with Mr. Ngo, the police just stood around and did nothing as Adam Kelly was beaten with a crowbar and sustained injuries to his head. What did Kelly do to provoke the crowbar to the head attack? Kelly was trying to get his friend to safety after Antifa terrorists began their attacks.

But this past weekend wasn’t a one-off “things got out of hand” moment in Portland, it has been building for a long time.

As Greg Norman reported for Fox News, this weekend’s incident is not the first time that Antifa members have gotten violent while Portland police looked on. In October 2018, videos circulated online purportedly showing some members of the group verbally harassing drivers and passersby – including a woman in a wheelchair – while officers stand nearby, appearing not to intervene.

After that incident, Ngo told Fox News’ “Tucker Carlson Tonight” that police in Portland seem to take a hands-off approach to protestors in the city. At the time, a Portland police spokesman told a local news outlet that officers monitored the protest however there was no intervention because police weigh “the ability for people to gather to practice their First Amendment rights to freedom of speech and assembly.”

Last August, Paul Welch, a registered Democrat who supported Bernie Sanders, told local newspapers that he was brutally assaulted by Antifa members who were protesting a right-wing rally because he possessed a “fascist symbol” – an American flag.

So far, the only national political figure to demand action has been Senator Ted Cruz, who said Portland Mayor Ted Wheeler should be investigated by federal law enforcement officials following his handling of Antifa and its takeover of the city on multiple occasions.

“To federal law enforcement: investigate & bring legal action against a Mayor who has, for political reasons, ordered his police officers to let citizens be attacked by domestic terrorists,” Cruz tweeted alongside a story recapping the incident surrounding Ngo.

Portland has become like cities in Mexico and Central America that are run by drug cartels and MS-13, where a corrupt mayor and the police simply stand by and watch while the gangs use violence to control the streets of the community.

If President Eisenhower could send federal troops to Little Rock, Arkansas to regain order when local elected officials joined white supremacist rioters opposed to integration, then President Trump can send federal troops to Portland to regain control of a city where local elected officials have ceded control of the streets to a Leftist terrorist organization