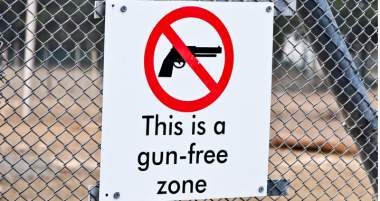 Question: Would you put a sign on your lawn stating “This Home is Proudly Gun Free”? No? Don’t worry, some years back pro-gun-control journalists were actually offered such a sign; they balked, too. Yet this raises another question: If telegraphing one’s declawed status is a bad idea for you, me, and all and sundry — and for kids in our homes — isn’t it also a bad idea for kids in our schools?

Despite this, the Gun-Free School Zones Act became law in 1990, and since then students have been nine times as likely to be shot to death in school. In fact, “An examination of 73 active shooter events at K-12 schools (at least 2 or more killed and/or injured) from 1956-2019, documented at www.schoolshootingdatabase.com, has found that these tragedies have nearly tripled in number since the inception of gun-free zones,” writes American Thinker’s Eric Laurine.

Moreover, while left-wing groups such as The Giffords Law Center support these zones and claim there’s no evidence criminals target them inordinately, the “Crime Prevention and Research Center … has examined mass shootings and found that ‘between 1950 and 2018, 97.8 percent of all mass public shooting occurred in gun-free zones,’” reports Laurine. He continues, explaining that the organization contrasted two time periods,

from before gun-free zone legislation was passed from 1956-1989 (nearly 33 years) and after the implementation of gun-free zones from November of 1990-2019 (roughly 29 years). …[B]efore gun-free zones were enacted, there were 19 active shooter incidents at K-12 schools, killing a total of 27 and injuring 105. Eleven (41%) of the 27 victims killed were students as were 76 (72%) of the injuries. The only mass school shooting (4 or more killed) committed in the Before Gun-Free Zones era was the 1989 Cleveland Elementary School shooting by Patrick Purdy, a mentally ill drifter with an extensive criminal history, which alone accounted for 5 of the 11 student deaths along with 30 of the students injured.

After gun-free zones became law, the number of active shooter scenarios surged to 54 shootings, as did the body count with 133 victims killed and 241 injured. Student deaths also spiked to 102 (77%) victims and another 216 (90%) students received gunshot injuries after the so-called common-sense reform of gun-free zones legislation was passed. Mass school shootings (4 or more killed) at K-12 schools went from being virtually non-existent, with one attack before gun-free zones, to 9 mass school shootings after the gun reform bill was enacted, ending the lives of 91 people and injuring 80 more. Seventy-five of the 91 victims, (81.5%) who had their dreams cut short, were students, and another 73 (91%) students received injuries, with some of them facing life-long complications, like, lead poisoning from shotgun pellets, multiple surgeries and PTSD.

Laurine also provides a chart illustrating the above statistics.

Of course, correlation doesn’t prove causation, and there are many other factors contributing to the school-shooting phenomenon. For example, there’s the widespread use of psychiatric medication(e.g., Paxil, Zoloft), which can have “homicidal ideation” as a side effect; the copycat factor and that the deranged now know that attacking schools brings instant notoriety; and our society’s continuing moral decay, accelerated by corruptive entertainment and school curricula.

That said, when 97.8 percent of mass shootings occur in gun-free zones, we should sit up and take notice. (Note: Outside of the film Terminator, no one tries to shoot up police stations.)

But how do you explain this statistic? Most mass shooters are “crazy people,” and, the argument goes, aren’t such individuals too irrational to be swayed by prospective targets’ hardness or softness?

In truth, clinically insane people (and I’ve interacted with them) are not oblivious to anywhere close to most realities. They don’t, for instance, leap from roofs flapping their arms in the belief they’ll fly, or jump in front of a speeding locomotive convinced they possess a dispensation from physics’ laws. They’re actually pretty good in the self-preservation department — except when they aim to commit suicide. Of course, were they wholly incapable of rational thought, they couldn’t plan a mass shooting in the first place.

Speaking of insanity, even liberals don’t really think gun-free zones are a good idea. Just consider, for example, a largely forgotten video made in 2013 by Project Veritas (PJ) after The Journal News in Westchester, N.Y., doxed registered handgun owners in its coverage area. Posing as “Citizens Against Senseless Violence,” PJ operatives visited the homes of ex-attorney general Eric Holder and various liberal journalists to ask them if they’d “support the cause” and post on their lawns a sign stating “THIS HOME IS PROUDLY GUN FREE” (video below). 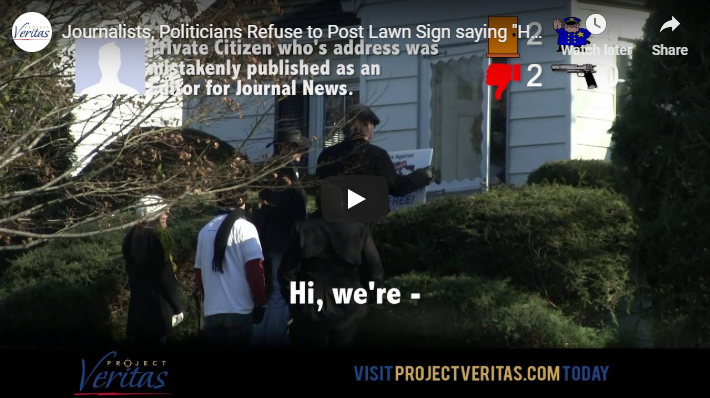 Not only did no one accept the offer, but one journalist actually said, “I am on your side on this, but I’m just wondering if that’s not an invitation to somebody with a gun!”

Shamefully, this means these leftists know better — but do worse. They want to appear enlightened in their echo chamber of effeteness, but they’re value-signaling with other people’s kids’ lives.

Thus should we have a simple demand for organizations such as The Giffords Law Center, Everytown for Gun Safety, and Moms Demand Action: You can support gun-free zones, as long as your officers are willing to keep a “Gun-free Zone” sign on their own lawns?

In fact, ex-vice president Joe Biden should be asked in an upcoming debate if he’ll agree to display such — because in 1990 he introduced the Gun-Free School Zones Act in the Senate.