Is Kamala Harris Eligible To Be President? 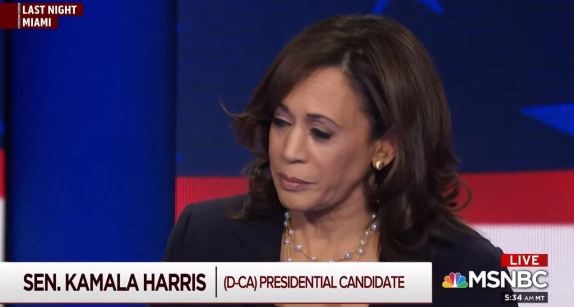 Is Kamala Harris Eligible To Be President?

The Constitution in Article 2, Section 1, Clause 5 sets out the eligibility requirements for serving as President of the United States:

And in 2016 this question arose and was argued at length – at least in the op-ed pages and Twittersphere – when Ted Cruz filed to run for President and now the question has been raised in connection with Far-Left Democrat Kamala Harris’s candidacy.

Harris, 54, was born in Oakland, California to a father from Jamaica and a mother from India – the immigration status of Harris’s parents is unclear at this point, although unlike Barack Obama, no one has questioned that she was born in the United States.

However, rightwing social media provocateur Ali Alexander tweeted, “She is half Indian and half Jamaican,” Alexander wrote. “I’m so sick of people robbing American Blacks (like myself) of our history. It’s disgusting. Now using it for debate time at #DemDebate2? These are my people not her people. Freaking disgusting.”

Alexander, who describes himself according to the Daily Beast as black and Arab, said that Harris has a “nasty, lying history with Black people.”

“Me pointing out that Kamala Harris has a mother from India and a father from Jamaica went viral last night because many people assume she descends from Black American Slaves,” he said in a statement to The Daily Beast. “She does not. I corrected Kamala Harris last night because she stole debate time under the premise that she is an African-American when she is in fact a biracial Indian-Jamaican who is a first generation American.”

Ali Alexander’s point is a good one – Kamala Harris’s family history is not rooted in the experience of slavery, the Jim Crow era and the Black Americans’ battle for civil rights, which would clearly undermine Harris’s authority as a spokesperson for and representative of the African American voters she is counting on to boost her to the top of Democratic Party’s 2020 presidential primaries.

But that’s really a political question, not a constitutional question.

When Ted Cruz was running for President much was made about the fact that he was born in Canada to an American mother and a Cuban-born father – Cruz was an American citizen because one of his parents was an American, but is he a “natural born” citizen.

The argument against Cruz went something like this: To be a “natural born” citizen, one must be born within the territory of the United States, to two citizen parents. One American parent could give you a legitimate claim on citizenship, but not the status of a “natural born” citizen necessary to be eligible to run for President.

As far as we can tell, Kamala Harris’s parents were not American citizens, they were here on student visas. They were not under the jurisdiction of the United States, they were merely temporary visitors at the time.

Applying the same logic, and historical and legal arguments, used against Senator Cruz, to Kamala Harris it appears she does not qualify as a “natural born” citizen, rather, she is more like America’s most high profile and least grateful anchor baby.