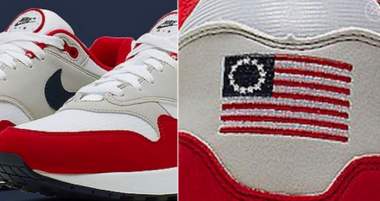 Colin Kaepernick has used his influence with Nike to have the company’s American flag-themed shoe called the “Betsy Ross” pulled from production just days before they were to be sold to the public, prompting swift and immediate backlash.

Citing sources close to the story, the Wall Street Journal reports that the Air Max 1 USA was slated to go on sale this week in celebration of the Fourth of July. “The heel of the shoe featured a U.S. flag with 13 white stars in a circle, a design created during the American Revolution and commonly referred to as the Betsy Ross flag,” WSJ reports.

And while Nike is claiming that it has declined to release the sneaker because it featured an “old version of the American flag,” the real reason the sneaker has been recalled, according to WSJ, is because Kaepernick reportedly told Nike that the shoes were “offensive,” prompting the company to recall the shoe and demand that retailers return their stock.

“After images of the shoe were posted online, Mr. Kaepernick, a Nike endorser, reached out to company officials saying that he and others felt the Betsy Ross flag is an offensive symbol because of its connection to an era of slavery, the people said,” reports the WSJ. “Some users on social media responded to posts about the shoe with similar concerns. Mr. Kaepernick declined to comment.”

Of course, Kaepernick’s understanding of the Betsy Ross flag has been unfairly influenced by some of the groups that use its image, mainly white supremacist groups such as the Ku Klux Klan.

In 2016, the NAACP’s chapter in Grand Rapids, Michigan, said that the Betsy Ross flag had been “co-opted by exclusionary movements,” including the “so-called ‘Patriot Movement’ and other militia groups who are responding to America’s increasing diversity with opposition and racial supremacy.”

Earlier this year, filmmaker Spike Lee told Politico that racism is “entrenched” in American history and was “sewn into the flag by Betsy Ross.”

But conflating the Betsy Ross flag with racism and slavery underscores a lack of American historical knowledge, as Betsy Ross was a Quaker, one of the invaluable anti-slavery groups of the colonial era. Quakers were among the first white people to denounce slavery, and the Society of Friends was the first organization to take an active stand against the institution of slavery and the trade of slaves.

And while history seems to indicate that Betsy Ross may not have been the seamstress behind the flag in question, legend holds that she is its creator. There is no way Betsy Ross was a racist.

History professor Steve Byas, who teaches at Randall University in Oklahoma, scoffed at Nike’s decision: “Arguing that the flag in use at the time of the beginning of the United States is somehow racist is historically absurd. The United States was formed as a military coalition to win independence from the British Empire. There is nothing in the Declaration of Independence that supports slavery. What this is all about is just an attack upon the founding of the country, with its belief that our rights come from God, not government. It is not surprising that a Castro-loving person such as Kaepernick would take this position, because he and others like him reject this founding principle.”

In an opinion piece posted in USA Today, Laurie Roberts, a metro columnist for the Arizona Republic, contends that Nike’s “capitulating” to Kaepernick is indicative of the fact that female patriots are not important enough to appease SJWs:

Betsy Ross may — or may not — have plied her needle to make the symbol that is embedded into everything that we do and everything that we are. But she, too, is a symbol of the female patriots who played a role in the birth of this nation.

Kaepernick has made a name for himself as the rabble-rouser who led the NFL protests against the National Anthem. He has not played in the NFL since 2016, as NFL owners have begun to distance themselves from players who engage in the pre-game protests, but has since signed with Nike as a spokesperson. Following Kaepernick’s signing with Nike, shares of the company reportedly went down more than three percent, according to the New York Times.

Meanwhile, Kaepernick’s and Nike’s treatment of the “Betsy Ross” sneakers have turned them into a hot commodity. CBS Sports reports that the shoes are currently selling for upwards of $2,000 on resale site StockX.com.

And Arizona Governor Doug Ducey has now weighed in on the controversy by announcing in a series of overnight tweets that he is going to pull millions of dollars in state incentives to get Nike to build a manufacturing plant in Goodyear, Arizona. “Instead of celebrating American history the week of our nation’s independence, Nike has apparently decided that Betsy Ross is unworthy, and has bowed to the current onslaught of political correctness and historical revisionism,” Ducey wrote early Tuesday. “Arizona’s economy is doing just fine without Nike. We don’t need to suck up to companies that consciously denigrate our nation’s history.”

CNBC wrote in its report on this story that the relationship between Ross’ flag and white supremacy was “not immediately clear to a number of historians contacted by CNBC,” though they noted that the Quakers had neutral leanings during the Revolutionary War.

“If all these historians didn’t know [the relationship between white supremacy and the Betsy Ross flag], then Nike shouldn’t be expected to know it,” said Mary Beth Norton, the Mary Donlon Alger professor of American History at Cornell University.

Even the Anti-Defamation League (ADL), with its database of more than 150 so-called hate symbols including the Confederate flag, contends that the Betsy Ross flag is not a racist symbol. “The Betsy Ross flag is a common historical flag,” said Mark Pitcavage, senior research fellow at ADL’s Center on Extremism. He noted that while the flag has been used by white supremacists “from time to time,” he has “never once thought about” adding the Betsy Ross flag to the list, CNBC reports.