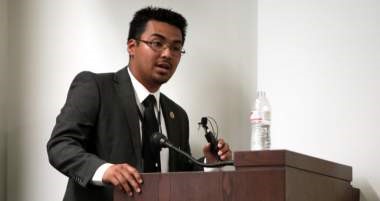 A defector from Antifa says the time has come to protect Americans generally and college students in particular from the terror group. As well, the authorities must stop it from intimidating voters during the 2020 election.

Recounting his time as an Antifa goon in an op-ed for Fox News, Gabriel Nadales (shown) says that the recent attack on journalist Andy Ngo in Portland, Oregon, shows just how dangerous the group has become. Yet even college professors who should know better are defending its tactics, he writes.

The group apparently attacked the young journalist, who is an avowed homosexual, because he disproved claims that the city’s homosexuals had been targeted in a wave of hate crimes.

“The footage of masked thugs beating him [Andy Ngo] with blunt objects and throwing ‘milkshakes’ allegedly filled with quick-drying cement is shocking to many,” Nadales wrote. “But I’m not surprised by this horrific behavior — I was once behind the mask.”

Nadales joined the group in 2010 during high school and claims he too participated in the terror group’s violent protests, although he never, he avers, hurt anyone. “I yelled obscenities, I destroyed property and I am ashamed of my actions,” he explains. “While I walked away from the movement over seven years ago, I have been following its growth and today’s Antifa members are far more brutal, thuggish and bold than anything I experienced.”

Antifa has been encouraged and allowed to thrive on our college and university campuses. Police are often forced to work with their hands behind their backs, as we saw from the footage of Ngo’s attack, and administrators have failed to hold those who commit acts of violence and intimidation accountable. We are now seeing it spill over into our communities.

Antifa will only grow more aggressive if it is not stopped, and we must target it where is has found fertile ground — our college and university campuses.

Leftist professors, he wrote, encourage the violence in the classroom, an example being Mark Bray, a visiting scholar at Dartmouth College. Bray wrote Anti-Fa: The Anti-Fascist Handbook, in which he claims that the group’s violence is “legitimate response.”

Professors elsewhere are recruiting for Antifa, and now the terror outfit threatens to dox college students who join conservative groups on campus.

Nadales claims the attack on Ngo is a “re-run of what’s been taking place on college campuses, where similar attacks and intimidation have been happening for the past decade.”

And, just as the police did nothing to protect Ngo, so have they been filmed standing idle while Antifa thugs brutally attack their victims.

At the University of California Berkeley two years ago, police were told to stand down as Antifa set fires and burned down the community, causing over $100,000 in damage. At UC Berkeley, UT Austin, and many others, administrators have done little if anything to hold violent agitators accountable. The universities’ failures to act have only emboldened leftist activists who think they can get away with threatening and assaulting conservatives.

Heading into the 2020 election cycle, Nadales writes, the attack on Ngo “is only the beginning.”

Neither is the attack on Ngo anything new.

After that attack, the Daily Caller exposed a top leader in the group as a progressive pay-day loan activist during the day with access to top Democrats. Cops charged him in connection with the Antifa goon squad that attacked two Marines in Philadelphia last year.

Another notable Antifa torpedo — this one a college professor, apropos of Nadales’ warning — skated on assault charges after he allegedly cracked open the skull of a Trump supporter. Internet sleuths examined photos to deduce his identity, then turned the information over to cops.

The FBI labeled Antifa a terror group in 2016.