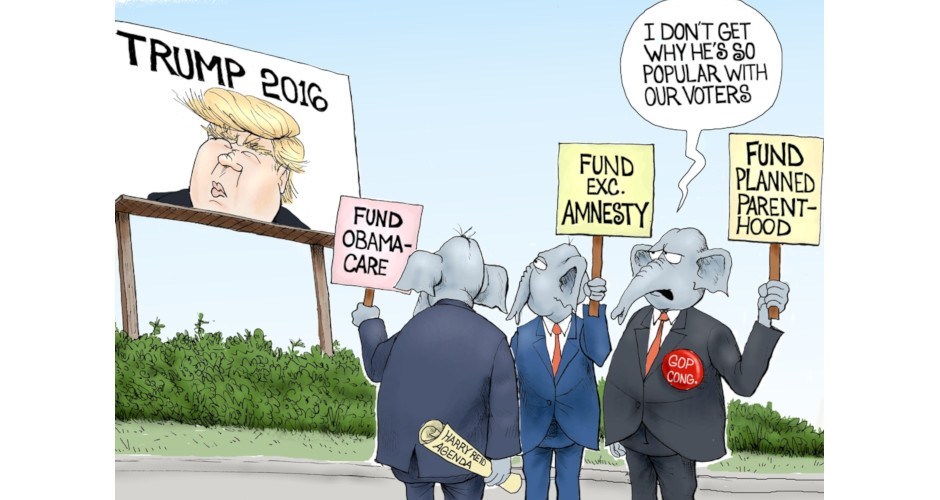 We now acknowledge insanity in governance from today’s extreme left Democrats who should be called Crazycrats. No brand of Socialism has ever worked and never can.  It only bleeds productivity and creates lethargy and its sole purpose is to be used for power by the elite.

If only RINOs (especially Mitch McConnell!) were real Republicans following the great GOP platform, the Constitution and working with President Trump!

SOME OF THE MANY CONSTITUTIONAL VIOLATIONS THEY COULD BE PARTY TO RIGHTING:

In a 2015 Senate Judiciary Committee hearing, one senator noted that “The Federal Register indicates there are over 430 departments, agencies, and sub-agencies in the federal government.”

Obama’s presidency produced 81,640 total pages of regulations and rules for 2016 alone, a record. To put into perspective what type of effect the regulatory state has on the American economy, a 2014 report by the National Association of Manufacturers found that regulatory costs on all firms exceed $2 trillion annually and disproportionally affected small businesses.

99% of these mistakes all have to do with their transgressions in violation of our blessed Constitution.

THE USA WASN’T CREATED TO HELP US

In the first place the USA should be all about states’ rights and the people.

All these actions by our government for citizens, corporations, financial institutions, states, counties, cities and other countries are not what our federal government was set up to do. Our federal government has morphed into a giant ‘good will’ endeavor purporting to enrich and improve life for the benefit of all, while in fact, it has been expropriating power to itself, charging it all to taxpayers and businesses while unsettling our true ‘competitive’ business dynamic in what should be a free marketplace.

Most of this was created at the direction of the establishment, the Council on Foreign Relations (CFR), with a design for gaining control for a global government.  The CFR oversees both parties!

THE USA IS ABOUT FREEDOM – PERIOD!

Free people prosper. Restrained people… not so much. Nothing spends like someone else’s money, especially when that someone else is utterly inattentive and over trusting. American citizens have been ‘tuned out’ and too trusting of politicians that are naïve, deluded or eaten up with $PECIAL INTERE$T greed, i.e. Democrats and our betraying RINOs?

WE DON’T HAVE A BUDGET PROBLEM!

We have a spending problem! A budget’s total of expenditures is not ‘the problem,‘ it is the itemizations!, or the ‘devil in the details’ that create the total to be balanced. Our list of expenditures is the root problem. Like itemizations such as our government spending more on corporate welfare subsidies than social welfare programs in 2006. And that is particularly outrageous when you consider that billions of those welfare expenditures are illegally being paid to non-qualifying illegal aliens which actually now is the greater of the two expenditures.

In FY 2016 total US government spending on welfare — federal, state, and local — was “guesstimated” to be $1,032 billion(that’s over $1 trillion), including $591 billion for Medicaid, and $467 billion in other welfare. There are 70 Federal Domestic Assistance agencies with 2306 programs listed here.

Philip Mattera in his report, “Subsidizing the Corporate One Percent” reported that $110 billion was given to 965 big business parents of subsidy recipients. He also stated that the total number of these awards were over 25,000 and all this accounts for a 75 percent portion of the total value of the Subsidy Tracker universe. 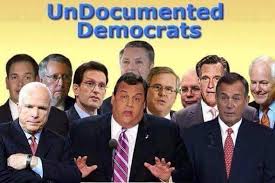 He stated, “Berkshire Hathaway, a company with $485 billion in assets and $20 billionin profits, received over $1 billion of that money. Its chair, Warren Buffett, is worth about $58 billion. Buffett, by the way, is still a darling of the left. He has some nerve to call for higher taxes. The billion dollars his companies took would pay for a lot of teachers, healthcare, and other public goods.” (His alternate recipients would also be receiving the money un-constitutionally.)

From Tom Coburn’s Milking Taxpayers at the Economist.com in 2015, “American farm subsidies are egregiously expensive, harvesting $20 billion a year from taxpayers’ pockets. Most of the money goes to big, rich farmers producing staple commodities such as corn and soybeans in states such as Iowa.

“To this day, to be treated as a farmer in America doesn’t necessarily require you to grow any crops. According to the Government Accountability Office, between 2007 and 2011 Uncle Sam paid some $3m in subsidies to 2,300 farms where no crop of any sort was grown. Between 2008 and 2012, $10.6m was paid to farmers who had been dead for over a year.”

These links are sure to further stir your ire: NFL gets billions in subsidies from U.S. taxpayers, 10 Taxpayer Handouts to the Super Rich That Will Make Your Blood Boil, Should Washington End Agriculture Subsidies?, American taxpayers give an $18 billion gift to the post office every year, and Despite $39 billion in Annual Gov’t. Subsidies, Solar Produced 0.5% of Electricity in US. Also for some insight and inspiration see: Downsizing the Federal Government, YOUR GUIDE TO CUTTING FEDERAL SPENDING.

Stephanie Condon with CBS News reported in 2011 that Ron Paul during his presidential campaign “unveiled a plan to cut $1 Trillion from the federal budget within one year by cutting a handful of federal departments.

Writing for the Cato Institute, Chris Edwards says, “So let me suggest some wasteful spending that the new administration should tackle, and the annual savings from terminating each:

Rural corporate welfare, which is handed out by the Department of Agriculture ($6 billion).

Energy subsidies, which have been one boondoggle after another ($5 billion).

TSA airport screening, which Trump has said is “a total disaster” ($5 billion).

The war on drugs, which wastes police resources and generates violence ($15 billion).

Obamacare exchange subsidies and Medicaid expansion, which should be repealed along with the overall law ($225 billion a year by 2026).

Josh Guckert at Libertarian Republic.com cites what he calls his Top 10 Examples of Government Waste, “Government Agencies Are Out of Control. When George Washington became President, his cabinet consisted of only an Attorney General and the Secretaries of State, War and Treasury. Needless to say, in the two centuries since then, government bureaucracy has gotten completely out of control, and it has become nearly impossible to keep track of all of the country’s departments and agencies. While there are entire departments that should also be discarded, here are 10 agencies which we could easily do without. Because there are so many which are ineffective and intrusive, this is certainly not an exhaustive list:

Also, see the GAO report about how the federal government wasted $45 billion in redundant programs.

It’s interesting that the Government Accountability Office’s 2016 report presents: “ 92 actions that the executive branch or Congress could take to improve efficiency and effectiveness across 37 areas that span a broad range of government missions and functions.

GAO also presents 59 opportunities for executive branch agencies or Congress to take actions to reduce the cost of government operations or enhance revenue collections for the Treasury across 25 areas of government.”

PRESIDENT TRUMP WANTS TO KILL THESE 17 FEDERAL AGENCIES AND PROGRAMS. HERE’S WHAT THEY ACTUALLY COST

Here’s a list of the various federal agencies reportedly on the chopping block so far with their budgets. See the full report with more details on each as reported in an article by Taylor Tepper with the above title at Time.com/money.

And guess what? Not one of these bureaucratic departments or agencies want their ox gored!

This could be a great beginning but we truly need to jettison a lot more of our socialist bureaus, departments, agencies, laws and regulations which have been exactly what all this ‘big government in control’ has been striving toward. The federal government was never intended to be in charge and certainly not a creator, fixer, charity house and surely not a referee picking winners and losers in the business community. It was established with enumerated powers, period.

THE U.S. GOVERNMENT SHOULD ONLY FOLLOW ITS ENUMERATED POWERS!!!

IT’S A STATES’ RIGHTS THING. States should control land, water, air and parks. Check the Constitution and awaken. Then threaten your legislators with retirement should they not start the hard job of reclaiming our Republic as it should be. This can and needs being done.

It should be pointed out that former government employees would evolve into vibrant jobs in the expanding commerce of the healthier private sector and be just fine. As Americans, the good ones will appreciate their new freedoms and the whiners will have to attend to some growing up. America isn’t about guarantees. It is about the freedom to grow and succeed and learning valuable lessons that can be built upon when attaining less.

States Bob Adelmann of the New American .com, “The one thing that would work best at reducing government: following the limitations placed on the federal government by the Constitution. Under Article 8, the duties have been enumerated, limited, and then guaranteed under the 10th Amendment: ‘The powers not delegated to the United States by the Constitution, nor prohibited by it to the States, are reserved to the States respectively, or to the people.’ Just following the Constitution would, it has been estimated, cut the government by at least 80 percent.” Think of the good that money could do working in the private sector.

Economic Freedom defined: The freedom to prosper within a country without intervention from a government or economic authority. Individuals are free to secure and protect his/her human resources, labor and private property. Economic freedom is common in capitalist economies and must incorporate other civil liberties to be deemed as truly free. – The Business Dictionary.com

Ox goring season is open year round. There are so many oxen to gore, whose protection will be vehemently fought for by LOBBYI$T$, their ‘client’ corporations, supported legislators, Presidents and judges.

PURE REPUBLICANS COULD ACCOMPLISH ALL OF ABOVE

Resolve to purge the GOP of RINOs must be undertaken, I believe, through education, testing, signed oaths of allegiance to the Constitution and the Party Platform, vote tracking and disciplinary measures.

Patriot up! and the walls (2) (maybe a third for California) are easily paid for!