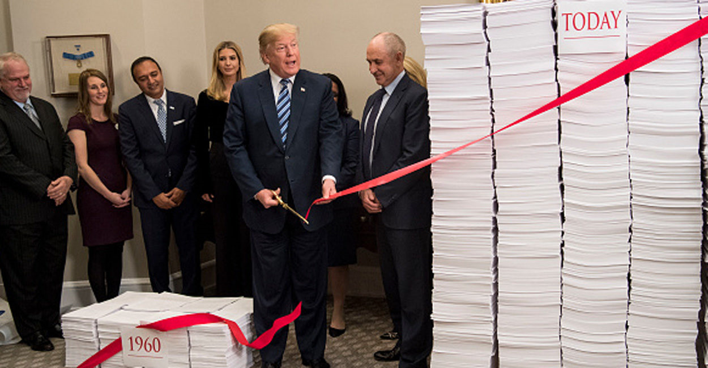 The Trump administration deregulation efforts will raise incomes by about $3,100 per household over the next five to 10 years, and sharply reduce prices for consumers, according to a report released Friday by the White House Council of Economic Advisers.

“The deregulatory efforts of the Trump administration have also removed mandates from employers, especially smaller businesses, and have removed burdens that would have eliminated many small bank lenders from the marketplace,” Casey Mulligan, the chief economist for the CEA, told reporters Friday. “These deregulatory actions are raising real incomes by increasing competition, productivity, and wages.”

The CEA report is titled “Economic Effects of Federal Deregulation Since January 2017: An Interim Report.”

The report takes a sampling of 20 major deregulatory efforts, which it projects alone will save consumers and businesses about $220 billion annually, and increase after-inflation incomes by 1.3 percent.

“Many of the most notable deregulatory efforts in American history, such as the deregulation of airlines and trucking that began during the Carter administration, did not have such large aggregate effects,” the CEA report says.

The report talks about the hidden costs of regulations.

“The ongoing introduction of costly regulations had previously been subtracting an additional 0.2 percent per year from real incomes, thereby giving the false impression that the American economy was fundamentally incapable of anything better than slow growth,” the CEA report says. “Now, new regulations are budgeted and kept to a minimum.”

The report says prescription drug prices have long outpaced inflation, but in the last two years price hikes fell by more than 11 percent, and even below inflation. It says that in 2018, prescription prices, “even declined in nominal terms over the calendar year for the first time since 1972.”

“We estimate that the results of these actions will save consumers almost 10 percent on retail prescription drugs, which results in an increase of $32 billion per year in the purchasing power of the incomes of Americans (including both consumers and producers),” the report says.

James Gattuso, senior fellow in regulatory policy at The Heritage Foundation, noted the depth of the CEA report.

“They really dug in and looked at rules that really had an impact. This showed a big impact,” Gattuso told The Daily Signal. “The administration should not lose momentum. They are nowhere near finished. This is not mission accomplished. There are still a lot of regulations out there.”

When Trump came in, he worked with the Republican Congress through the Congressional Review Act to sign 16 bills deregulating education, mining and retirement accounts. The CEA projects this will mean an increase in real incomes of $40 billion for the country.

The Tax Cuts and Jobs Act, or tax reform, and the banking bill also had a big impact, Mulligan said.

“Consumers are also saving money on Internet access: about $40 per subscriber thanks to the deregulatory actions of Congress and President Trump,” Mulligan said. “Considering that most households have multiple Internet subscriptions, when applied to both wired and wireless, $40 per subscription becomes $15 billion per year in the aggregate.”

With the recent conservative victories related to tax cuts, the Supreme Court, and other major issues, it is easy to become complacent.

However, the liberal Left is not backing down. They are rallying supporters to advance their agenda, moving this nation further from the vision of our founding fathers.

If we are to continue to bring this nation back to our founding principles of limited government and fiscal conservatism, we need to come together as a group of likeminded conservatives.

This is the mission of The Heritage Foundation. We want to continue to develop and present conservative solutions to the nation’s toughest problems. And we cannot do this alone.

We are looking for a select few conservatives to become a Heritage Foundation member. With your membership, you’ll qualify for all associated benefits and you’ll help keep our nation great for future generations.

Fred Lucas is the White House correspondent for The Daily Signal and co-host of “The Right Side of History” podcast. Lucas is also the author of “Tainted by Suspicion: The Secret Deals and Electoral Chaos of Disputed Presidential Elections.”  Send an email to Fred.