The Insolence of Office 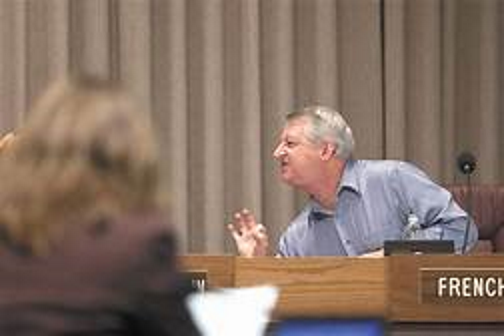 The Insolence of Office

In August of 2014 Commissioner Al French spoke at the Northwest Grass Roots Campaign Forum at Darcy’s Tavern along with other politicians running for office. The last question Al was asked was, “Why do you always vote for the political pick for appointees, instead of the number one choice of the Republican Precinct Committee Officers?” Al answered, “That was a mistake to do so. From now on I will always vote for the number one choice of the PCO’s.” At the time I wondered if that would come back to haunt him. He was on camera and the room was full of PCO’s.

If Al French had not made that promise I would never have sought the appointment for Shelly O’ Quinn’s vacated Commissioner Seat in my District. I thought if I could come in first place with the PCO’s, and Al kept his word, then I would get the appointment. I did come in first place, and Al broke his promise. He voted for his longtime political ally Mary Kuney, who had come in second place. This action deadlocked the vote of the two remaining Commissioners, since Commissioner Josh Kerns voted for me. After 30 days it went to Democrat Governor Jay Inslee who chose Mary Kuney to fill the seat.

Another factor weighing in my decision to go for the appointment was in 2014, when I met with Al French after the election, and he encouraged me to run against Commissioner Shelly O’Quinn in 2018. Al’s relationship with O’Quinn had started out well, since he had endorsed her in 2012 when Shelly and I ran against each other for the seat, but with the development of an extremely close relationship between County Commissioner Todd Mielke and Shelly, Al began to feel like a 3rd wheel. In essence, Todd Mielke ran the County now since he could always count on Shelly voting with him. I answered Al’s query asking me to run against Shelly with the statement that the electorate had chosen Shelly over me in 2012, and that was that.

I think Al was suddenly afraid of being a third wheel happening again with me as a County Commissioner. I had been friends with Commissioner Kerns for ten years and our politics were similar. However, I do believe in calling things as I see them, and I know I would have been a fair commissioner.

I could never gauge Al French’s politics. Most of us thought he was a Democrat, until suddenly he became a Republican Precinct Committee Officer, and ran as a Republican for County Commissioner in 2010. He narrowly beat Republican Jeff Holy in the Primary, and then narrowly beat Democratic Commissioner Bonnie Mager in the General election. Just before the General election someone had tied signs to Bonnie Mager’s signs accusing her of being a property tax cheat. The allegation was false, and Al denied any knowledge of the dastardly deed, but he won just the same.

I had taken a two term pledge as Treasurer and it was my intent to run for Auditor in 2018, but Shelly O’Quinn’s resignation, shortly being re-elected in 2016 to a second term changed things. Shelly had been offered a much higher paying job. When Shelly ran in 2012 her campaign motto was “It’s All About Jobs!” I am not clear on how many jobs Shelly created while in office, but I tend to think it was more all about Shelly.

I had many friends urging me to go for the appointment to the vacancy. I thought I could do more as a Commissioner, so I “cast a fleece” by throwing my hat in the ring. If I was meant to be Commissioner then I would come in first place. If not, I was prepared to drop out.

When Senator Bob McCaslin passed away in 2011 the same appointment process took place to replace the late Senator. Rep. Matt Shea came in first place with the voting of the Republican Precinct Committee Officers, but the Commissioners, including Al, voted for 2nd place Jeff Baxter.

So why even bother becoming a PCO? As a PCO you take an extra Saturday out of your schedule to make the best choice you can, after listening to multiple speeches, and bewildering Robert’s Rules of Order obfuscations. Good question. That is why the question was posed to Al at Darcy’s in 2014 by a disgruntled PCO.

Since Al had asked me to run in 2014 there had been another development. Democrat Auditor Vicky Dalton had hired Mary Kuney to be her Deputy Auditor. Mary was now in a position to run for Auditor in 2018 if Vicky decided to retire. But the resignation of Shelly O’Quinn shuffled the Chess Board. If Al could get Mary Kuney in as Commissioner he could count on her as his perpetual second vote, just as Todd had counted on Shelly.

After the interviews of the top three candidates recommended by the PCO’s, the two remaining Commissioners, Josh Kerns and Al French, announced that they were at an impasse. My Fourth District Representatives; Senator Mike Padden, Representative Matt Shea, and Representative Bob McCaslin Jr. went to see Al French on my behalf. He promised them he wouldn’t allow the decision to go to Governor Inslee. Once again Al French broke his word. Al delayed until time was up, and Democrat Governor Inslee appointed our Republican Commissioner Mary Kuney, who went on to win in the election of 2018. Smart money, in fact almost all the money was behind Mary.

I didn’t like the idea that a Democrat Governor had appointed our Republican Commissioner. But even more I didn’t like the idea that a County Commissioner could publicly lie and get away with it. I had beaten Mary before in 2014 when she had tried to oust me at Al’s behest as the first Republican County Treasurer since 1956, and I eventually won that race with 56% of the County vote. I didn’t raise near the money last year that Mary raised, but I gave it my best and doorbelled 605 miles before the Primary. Even so, I got whomped 60-40%.

I did complain afterward about Al’s lack of integrity, but I found out many people didn’t seem to have a problem with it. Their gist sort of went like, “Well you can’t really believe anything Al says, but he does do good things out in West Plaines.”

I didn’t get involved in politics until my 40’s, but I got involved because I was fed up with the lying, lack of transparency, and stupid decisions I had witnessed all my life. Besides, as a citizen I had as much right to run as anyone else. Politics to me had always been something other people did, but I thought to myself I could do better. I tried to do better, and I know I did, but that doesn’t guarantee political success. There is another measure though. I kept my integrity and Al sold his soul.