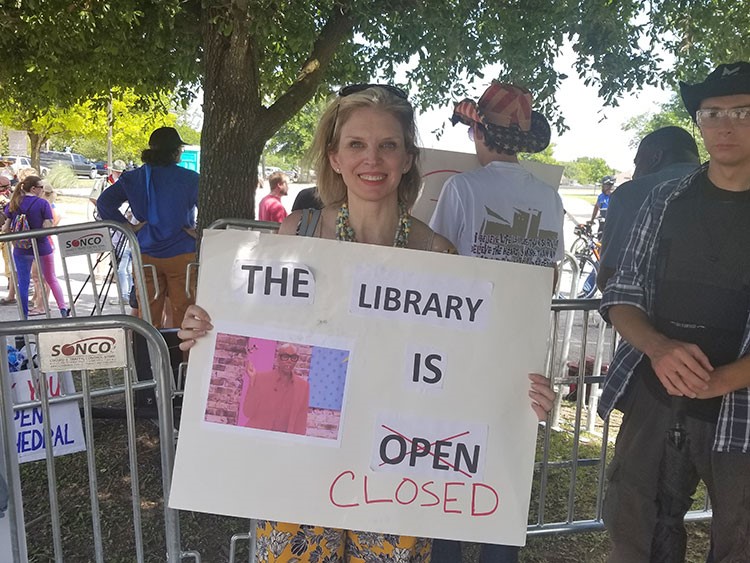 Texas MassResistance activists in Leander, TX, (led by our fearless Houston MassResisstance chapter) notched another big win on June 15 in the “Drag Queen Story Hour” wars, These events around the country are targeting young children with homosexual and transgender propaganda in public libraries. Because we were aggressive and stood our ground, it was a complete victory for the pro-family side!

As we recently reported, the “Drag Queen Story Hour” was scheduled for June 15 in the Leander Public Library, and was originally sponsored by the Library.

But on May 23, the City of Leander decided to cancel the event after Texas MassResistance distributed a 57-page report exposing the lurid and pornographic social media photographs of the scheduled drag queen – and the fact that two recent drag queens at the Houston public library events had been revealed to be convicted child molesters. The city admitted it had not done a background check on the person scheduled in Leander.

But then the event was back on again. Immediately after the cancellation by the City, a local pro-LGBT church rented a room in the Leander Library for June 15 – to hold the same “Drag Queen Story Hour” event there. This move made national news, and was celebrated in The Washington Post.

Texas MassResistance announced they would be protesting outside on June 15 and joined by other Texas pro-family groups. The Antifa chapter in nearby Austin, TX announced they were also coming – presumably to harass and intimidate the pro-family protesters.

Reaction to Antifa. Texas MassResistance made it clear that they weren’t afraid of the Antifa threats. The Leander police also announced that they intended to protect the pro-family protesters from any possible violence. The Antifa group responded by publishing a somewhat toned down, but still threatening, call to action to come to harass the protesters.

Church backs down and drops “Drag Queen” from event! On June 14, the pro-LGBT church announced that the “Drag Queen” would not be coming on June 15 and reading to the children – and it would not be a “Drag Queen Story Hour”. Instead, they were re-naming it “Leander Family Pride Festival and Story Time.” Instead of the Drag Queen reading to kids, “parents of LGBTQ families and of adopted kids have stepped in to be our readers.” The books they said they would be reading were, of course, homosexual-themed children’s books. They also said that there would be some Drag Queens in attendance, but although there were a few Drag Queens standing outside the library, it appears that none of them actually came into the event.

Antifa backs down – no organized presence at protest. After all that tough talk, from what we could tell, on the day of the protest there was no organized Antifa presence at all. There were about 75 pro-LGBT people there milling about in opposition to the 100 or so pro-family protesters, divided by police barricades along with dozens of police. But they appeared to be just a bunch of random gay activists from out of town, mouthing their predictable slogans and chants about “hate” and “bigotry.” 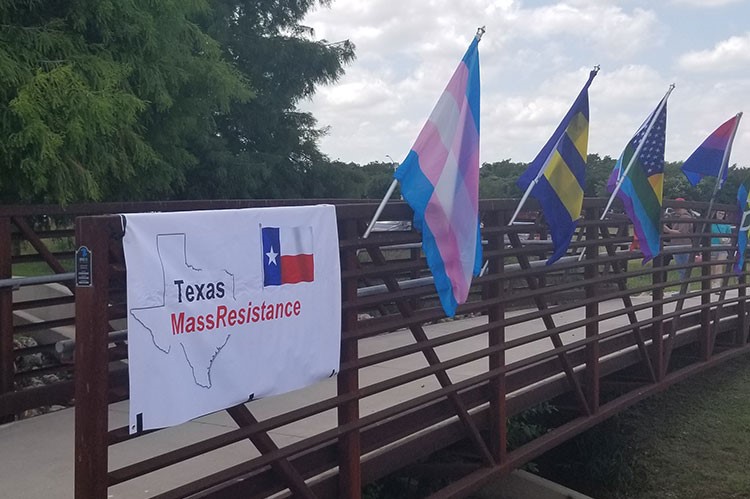 This walkway leading to the library was decked with various LGBT flags – and the Texas MassResistance banner!

The library protest: Texas MassResistance parents and families against the LGBT agenda

Led by Tracy Shannon, head of Houston MassResistance, the protest outside of the Leander Public Library was a great success. They definitely sent a message to both the city officials and the LGBT activists. 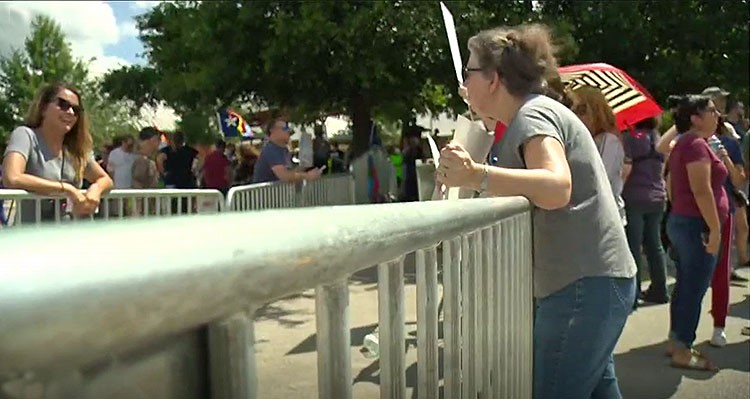 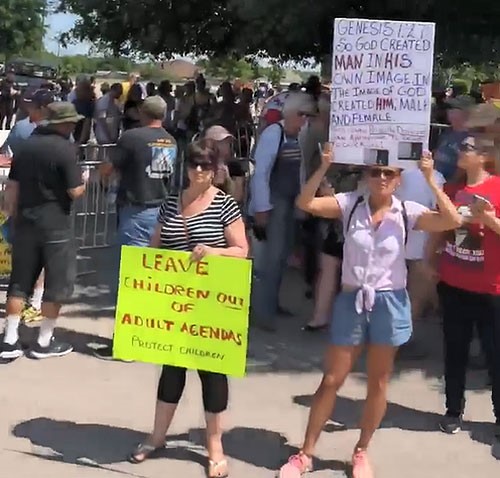 Local pro-family parents were not afraid to tell it like it is. 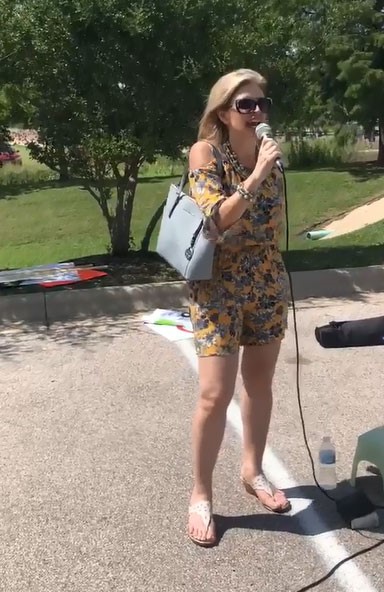 During the protest Tracy had her own words for the LGBT activists: “It is not a child’s job to validate your identity or your sexual orientation.” 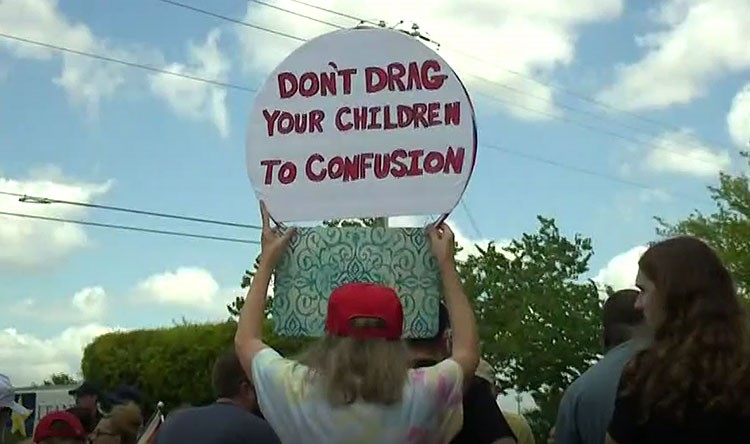 The only trouble happened when an InfoWars reporter who was there walked into the LGBT crowd with his cameraman to interview people. They swarmed around him and assaulted him, a few of them grabbing his crotch and his buttocks while one of them clanged a loud bell in his face. He quickly ran out of the crowd. The police made no arrests. But this underscores the perverted nature of these dysfunctional people. See the InfoWars report here. 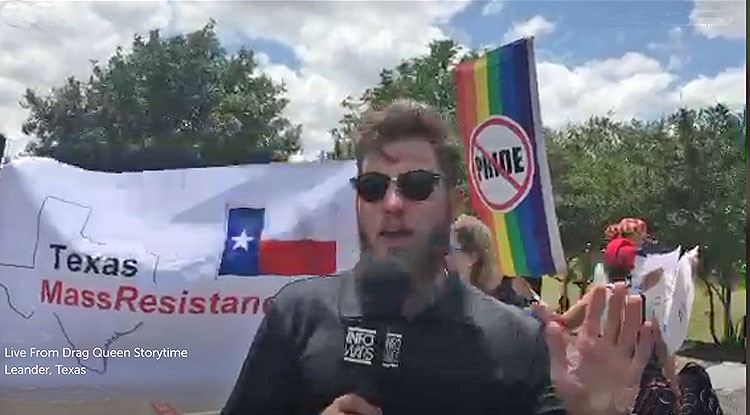 The InfoWars correspondent reporting from the scene. 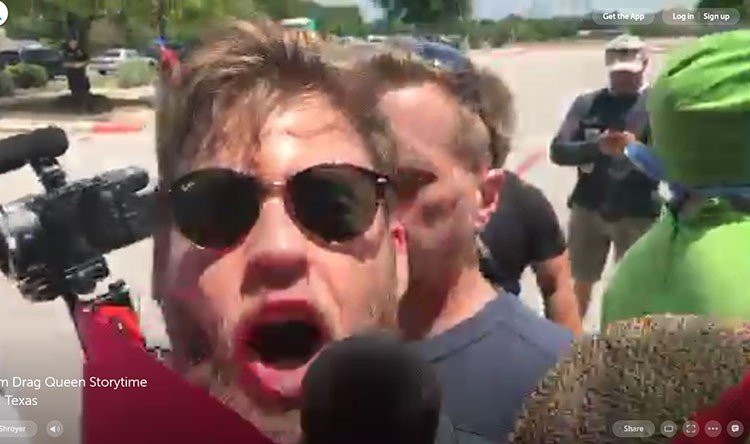 When the InfoWars reporter went into the crowd of LGBT activists and was being groped, his immediate reaction was caught on camera.

It’s all about pushing the agenda. More specifically, it’s about pushing their own sexual issues on others. It’s interesting to note that this “Drag Queen Story Hour” was originally billed as a “literacy” and “reading” event for children. But in fact, it was all about the LGBT agenda. The books they read to the children are about normalizing “LGBT families” and “gender fluidity” and acceptance of anything that’s different.

The people who ran the event and virtually all the attendees, as well as the counter-protesters, are part of that movement – and most seemed to be from out of town. They certainly appeared to have the same sense of superiority along with self-righteous anger and hatred of the local Christians that we see at most of these kinds of events. 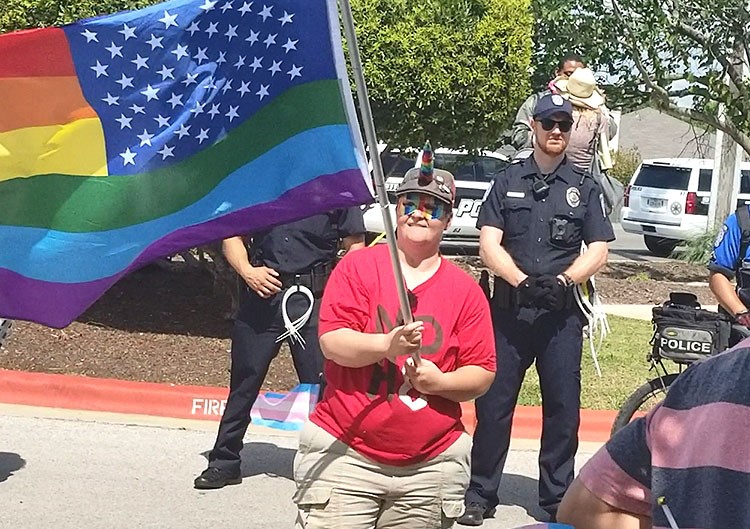 Public disrespect. This is what this LGBT counter-protester thinks of America.

That combination is usually quite effective. But this time all that didn’t work out for them.

And finally: City announces upcoming change of library policies. MassResistance’s standing up to all this definitely spooked the city officials, and they clearly want to avoid this sort of problem in the future. The day of the protest, Leander city officials told reporters that they are going to review their policies, not only on the programming they allow in the library but also their policies for allowing people to rent rooms in the library and in the city.

There’s much more to come from Tracy and our outstanding Texas MassResistance group! We’ll keep you informed.