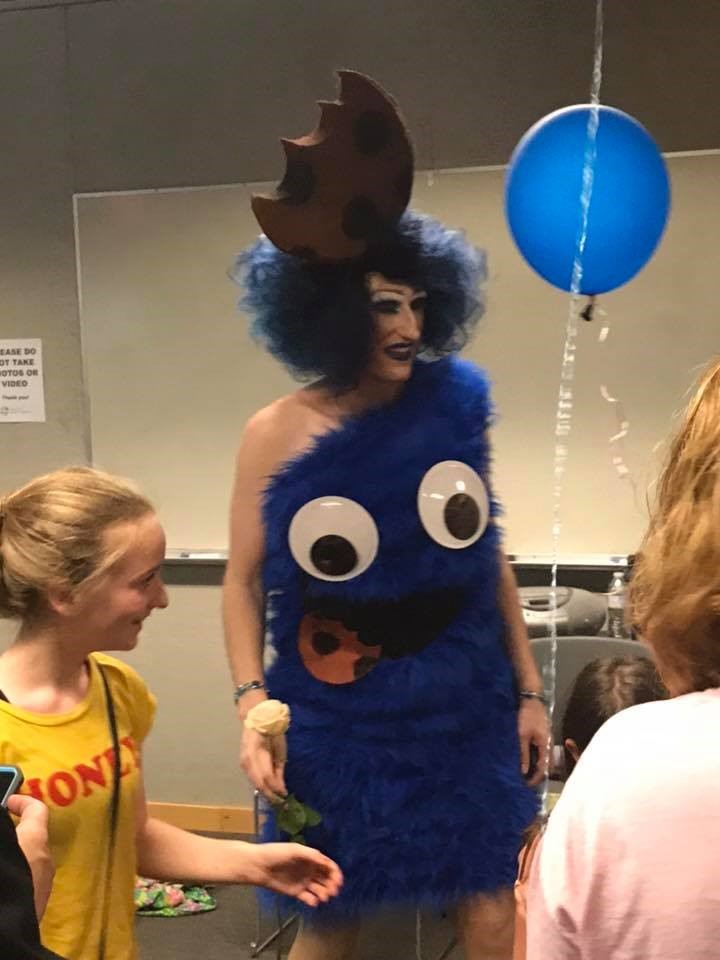 Shots were fired in the cultural/spiritual war Saturday at the Drag Queen Story Hour at the library on the affluent South Hill of Spokane. A cute little boy, about four years old, bounced up and down to catch bubbles, dressed in a floral sun dress. He is the collateral damage. Mental health professionals call exposing children to highly sexualized living Adverse Childhood Experiences. There were many young children on the Drag Queens (DQ) library side of the street experiencing overwhelming sexualized role models, police presence, yellow crime tape around the library and chaos of the spiritual battle.

On the other side of Perry Street, a few protesters gathered early, shouting at the DQ, stating their objections and condemnation.

It was obvious that there were three different groups, each with their own protest tactics. Each group wanted to protect children.

The 500 Strong Mom group offered protest signs as people arrived. Several moms, who originally called for the protest, joined the group with the bull horn attacking the DQ participants. Then as more assembled, they spent time praying the rosary for the carnival attitude and participants at the public library.

Another group set up a tent with gospel music. This group of individuals came together from various churches, not one particular organization. The music on the portable sound system began a praise service with singing and worship. Then three pastors spoke, Bill Fowler from Church Without Walls with a gospel message followed by Ken Peters with the Covenant Church. He had a message that God loves all and all have sinned regardless of the side of the street. Finally, Jim Anderson from Victory Faith’s Life Line Ministry spoke of sin by all and even aimed a part of his message at those singing and praising.

Information not highlighted on either side of the street is that early exposure to sexuality is abuse. LGBTQ individuals suffer in many areas, higher levels of drug use, higher sexually transmitted disease rates including HIV, more partners accompanied by depression/suicide. Transgenderism brings additional pain with the likelihood of continued emotional trauma, osteoporosis, heart disease, stroke and cancers. The human suffering as well as the spiritual suffering cannot be ignored in favor of political agenda.

On the library side of the street, DQ gathered a crowd, several in drag costumes. With games for the kids, bubbles and balloons, even a bubble machine that filled the street with tiny bubbles. As the worshippers sang or preached, they beat a drum, offbeat, randomly blew a trumpet and shouted taunts to the protesters. Cars went between the groups shouting, honking long disruptive honks combined with waves and hand gestures at the protesters. Many were supportive of sign wavers on the DQ sidewalk.

The library had refused to have a discussion by citizens the hour following the DQSH saying it was unavailable but they opened the room for a second hour. It was not booked after all. 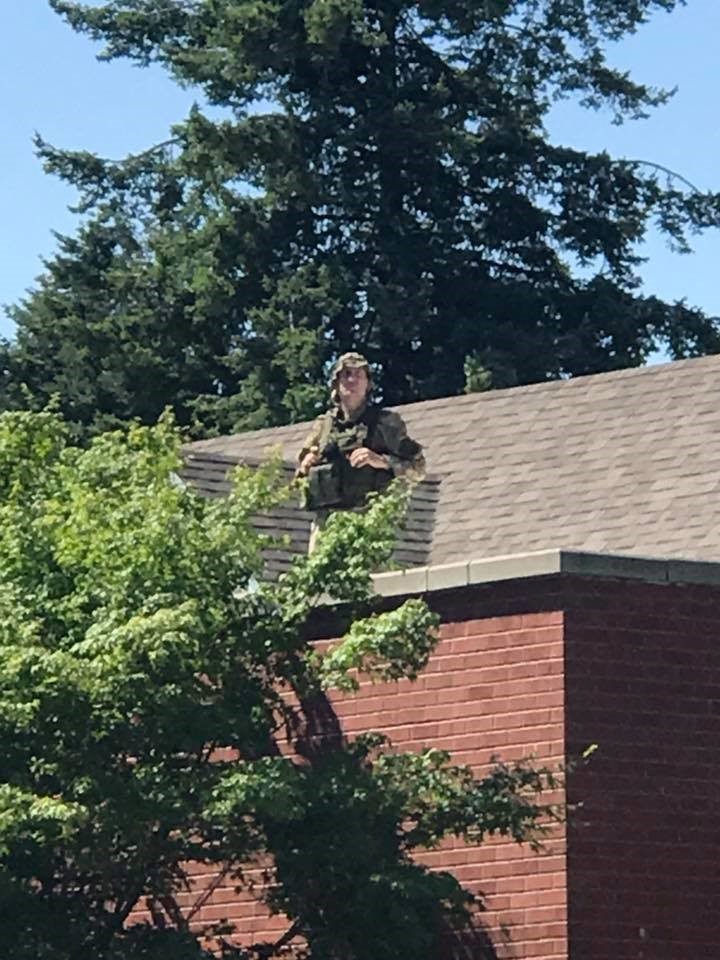 Police, SWAT teams had arrived early to blockade streets for blocks and to keep protesters off of the public library property. There were at least four police snipers on the tops of buildings aimed at the protesters, not at the DQ. One DQ walked across to the protester side to claps and whistles but without police interference or redirections. However, protesters were directed, without hesitation, to go to the other side of the street.

Those protesters sensitive to the spiritual clash in the heavenlies wept, prayed and felt the spiritual ground being claimed by the DQ. This will not be the last attack of children and family values or the mocking of God’s Word.

As the protestors played gospel music, across the street, six to eight adults donned white gowns and sheet-covered wooden frames to create giant wings. As the “angels” for DQ stood on the edge of the sidewalk, some were singing along with the gospel songs. Then as the gospel was preached the “angels” turned their backs on the message. DQ strolled up and down the street in their high heals chatting with their often oddly dressed supporters. 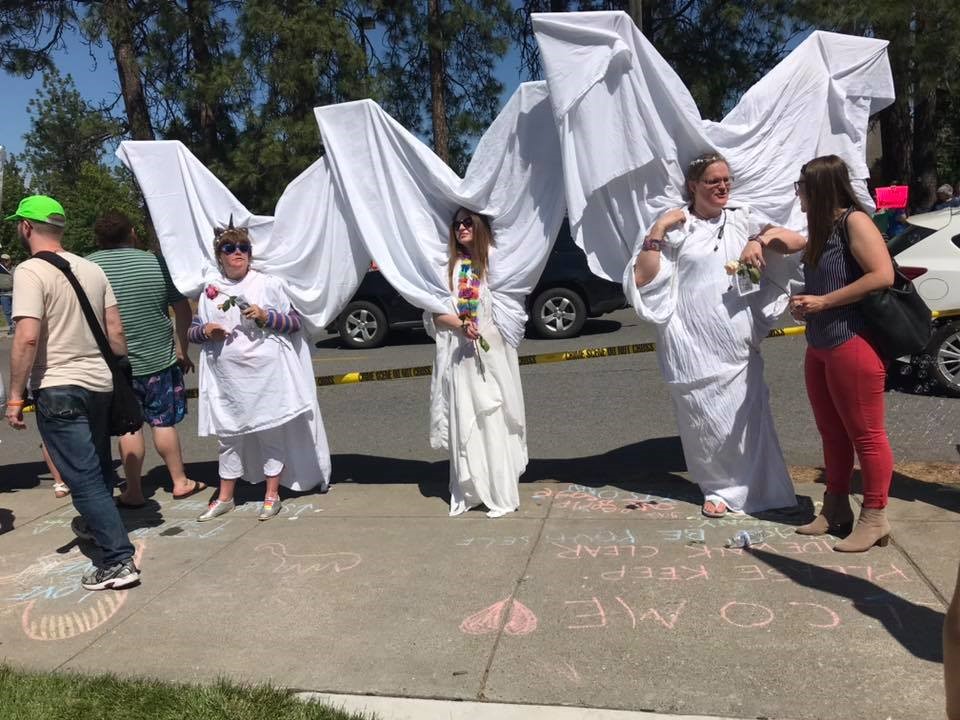 What went wrong? Protesters and DQ supporters alike ignored the sins; the denigration and mocking of women to the point of hatred, denying the science and God-given fact that one is born male or female and finally, the sin of adultery in the form of sodomy/homosexuality. In other words, the agenda of transgenderism.

The question on both sides of the street was, “What’s next?”

The cute boy in the summer dress needs you. Where do you stand? With the snipers, ready to shoot Christian protesters, with those seeking to assault small children with explicit sexuality, or with the praying, praising protesters standing on the Word of God?

Next Saturday June 22 at the Downtown library, another display of the DQ and transgender agenda will occur.