Christianity is under siege in America 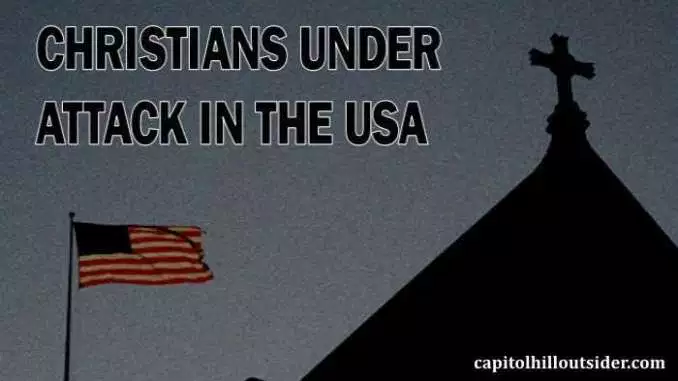 Christianity is under siege in America

In this great country, it’s not a crime to be a Christian – at least not yet. But the left is working on it. Free expression of religion is not just shunned, it is ridiculed and mocked. Anti-Christian bigotry is the only form of acceptable intolerance remaining in this country – to be encouraged and incited by our “tolerant” liberal friends in academia, the media, and entertainment.

Christian principles were foundational to the American Republic. Yet what matters to the left is silencing the Christian influence of this nation. The battle to destroy Christianity is really the battle to destroy America. The intolerant left is replacing the structure of an orderly and benevolent norm with falsehoods, distortions, intimidation, and violence. Unfortunately, traditional American Christians have been on the losing end of the culture war for a long time.

America’s Christian heritage centers on the idea that we are born with equal rights in the eyes of our Creator. It follows that our laws should be applied equally to all and that freedom of conscience and freedom of speech would be hallmarks of this republic. In view of these beliefs and the different denominations living side by side, it meant that in America, there would be no institutional or governmental mediator between the individual and God.

A vigorous new secularism in recent years, however, has propelled ridicule of Christianity into the mainstream of acceptable behavior. It has become part of the larger pop culture. Today, Bible-bashing and Christian-mocking are a favorite pastime on television, in movies, and on social media, complete with ugly insults and death wishes.

Christian beliefs in the sanctity of life, free will, and the flawed nature of humanity are the principal bulwarks against a descent into barbarism that progressivism promises. To the degree that Christians speak up for biblical virtue and sexual purity, and to the degree they preach the Gospel as the one true way to God, they are scorned and ridiculed.

But it is beyond ridicule when their observance of biblical sexuality or their opposition to the reclassification of marriage gets them labeled as contemptible extremists and bigots who are not worth the air they breathe. Much of the rhetoric on the left is hateful and over the top and should be condemned.

The attack on the free exercise of religion now moves beyond prayer at football games and commencement ceremonies to legal battles over wedding cakes. Bible-believing people are frequently likened to ISIS, charged with wanting to create a Taliban-type theocracy of haters.

Many Christians are concerned with what they perceive to be the increasing secularization of popular culture today. They express concern that Christianity will one day become hated and persecuted in America as it is in much of the world. That day may not be far off.

The Judeo-Christian morals upon which the United States was founded are unacceptable to the left because they are an obstacle to a government takeover. A relatively small group of atheistic and radical activist organizations such as the ACLU, and the judicial activism of the courts, have succeeded in banning prayer from schools and Christian symbols from public buildings. At the same time, religious speech has been banned in political debate, and Christianity is extricated from the common way of life. David Horowitz chronicles this activity in his excellent book, Dark Agenda.

The dual First Amendment clauses of no “establishment of religion” and the “free exercise thereof” have been the basis of American identity since the founding. Historically, these two principals have not been a partisan issue. Two thirds of Americans agree that there must be a strict separation of church and state, and about the same number say they are concerned about protecting religious liberty. Unfortunately, it has now become a partisan issue.

The left’s goal is to replace religious faith with the progressive socialist agenda as the ruling norm in their new world order. This is the culture war, plain and simple. The effect is cascading beyond America. This, plus the relentless advance of radical Islam, has made Christianity the most persecuted religion in the world.

The Christian Founders made religious freedom of conscience the underpinning of all American freedoms. In doing so, Christians have provided a great gift to all Americans as well as to people all over the world whose freedoms they have defended. The message of the cross is foolishness to the world, and so Christians tend to be mistreated. But throughout history, Christians have been their most vibrant when under persecution.

Overall, Christians in America are handling this cultural onslaught of mockery and ridicule surprisingly well. New research published by scholars at Harvard University and Indiana University Bloomington reveals that the percentage of Americans who attend church more than once a week, pray daily, and accept the Bible as meaningful to their lives has remained constant for the last 50 years or so.

However, there has been a growing gulf between faithful Christians and the so-called “social Christians.” Mainline churches with a theologically liberal and watered down gospel message are losing congregants. Churches who unabashedly teach the Bible with seriousness, with calls for discipleship and intimacy with God, are growing. Americans are moving away from lukewarm and toward substantive Christianity, and this trend shows no sign of changing.

The hostility against believers is reaching a watershed, and things could get even uglier in the time ahead. The faithful believe that God is in control, and that is a great comfort for them. The great irony is that liberals tell them to “coexist” when liberals are completely incapable of doing just that.

If leftists don’t like Christians, that is just too bad. They’ll have to learn to be more tolerant.

Published with Permission of RenewAmerica.com