Whose Country? Feds Have Facility Where “Trans” Illegals are Treated Better than Citizens 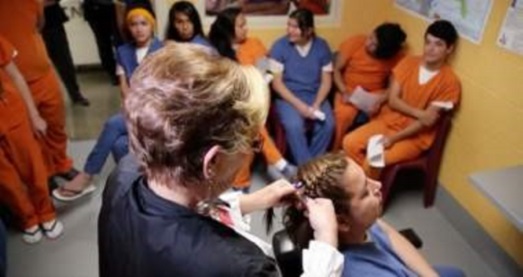 Whose Country? Feds Have Facility Where “Trans” Illegals are Treated Better than Citizens

Would you like unlimited free healthcare, including dental? How about gratis legal aid, self-beautification counseling, taxpayer-funded recreation that includes Zumba classes, and more?

Well, sorry, you’re out of luck unless you happen to be an illegal alien man claiming to be a woman. In that case, the Immigration and Customs Enforcement (ICE) agency has a facility just for you — it brags about it, too.

The place is Cibola County Correctional Center in Milan, New Mexico, west of Albuquerque; it has more than 400 detainees, 27 of whom are individuals of a Made-up Sexual Status (MUSS — “transgender” exists no more than does “trans-species”). They’re housed in a dedicated unit opened in 2017.

The unit’s existence makes clear that the feds are dedicated, too, just not to citizens. For example, the center offers classes to help male MUSS illegals appear more feminine. A video distributed by ICE shows a facilitator leading such a class and saying, “This is the self grooming-class and the self-presentation class. We’re going to learn about hair and makeup and how to present yourself to the public so that your femininity is more, um, apparent than someone just looking at you and questioning what your gender is, Ok?”

Fox News commentator Tucker Carlson reported on this Friday night. “Giving fashion tips to men who dress like women who’ve snuck into our country illegally is a priority for our federal bureaucracy,” he said. “They’re happy to spend your money — a lot of your money — doing it.”

“Meanwhile, for American citizens, things get steadily worse: Life expectancy declines, half a million people sleep on the streets every night, heroin addicts line the sidewalks of our once-great cities, but at least the federal government can pay for a specialized attention center for transgender migrants in New Mexico,” Carlson continued.

It gets even worse. “Thirty million Americans don’t have health insurance, and millions more pay way more than they can afford for health insurance. But transgender migrants don’t have to worry about that at all,” Carlson also complained. “According to ICE’s latest press release, they get all the free healthcare they want; that includes mental health services and dental” (video below).

If after all this, however, the MUSS migrants still have energy to burn off, the center also offers volleyball and basketball; if they’re feeling lazy or cerebral, there are televisions and a library; if they’re hungry, there’s a microwave and kosher food on the menu.

MUSS migrants also have a garden in which to plant flowers and “access to Zumba classes, [and] an arts and crafts program,” Georgia Voice further informs. They may even sing opera in their free time — which, presumably, is anytime — as the video above illustrates.

Yet there’s still more. “When the migrants aren’t listening to opera or singing opera or learning how to be more feminine,” Carlson sarcastically observes, “they’re getting free legal aid from the left-wing activists that the government invites to visit the detention center.” Well, hey, you don’t learn how to game our system in Zumba classes, you know.

Carlson summed up, lamenting, “Life for transgender illegal aliens is actually much better than it is for many American citizens. It’s not really surprising. You can tell who the government really cares about — and it’s not you.”

Note again that these videos are not products of a sting; rather, ICE brags about them because, today, it’s a way of value-signaling, of saying “Look, we’re not bigoted!”

Yet this story also reflects other leftist priorities. First, liberals facilitate immigration and illegal migration driven by power lust: They know that, after naturalization (and sometimes before), 70 to 90 percent of these newcomers will vote for them. MUSS migrants will lean even more left-wing, mind you.

Moreover, there’s identity politics, which assigns people value — and discriminates — based on group identification. Female trumps male, which is why politicians vow to eliminate the workplace wage gap, which favors men, but not the workplace death gap, which favors women. Black trumps white, which is why we hear about white privilege while blacks benefit from affirmative-action privilege. Muss trumps female, which is why men masquerading as women are taking sporting titles from actual women. “Illegal” increasingly trumps citizen, which is one reason we’re called “racist” for wanting to secure our borders.

And since this is largely a cultural phenomenon, Trump can trump very little of it.

Just imagine, too, that not long ago the identity “American” was what really mattered. Do you miss your country yet?