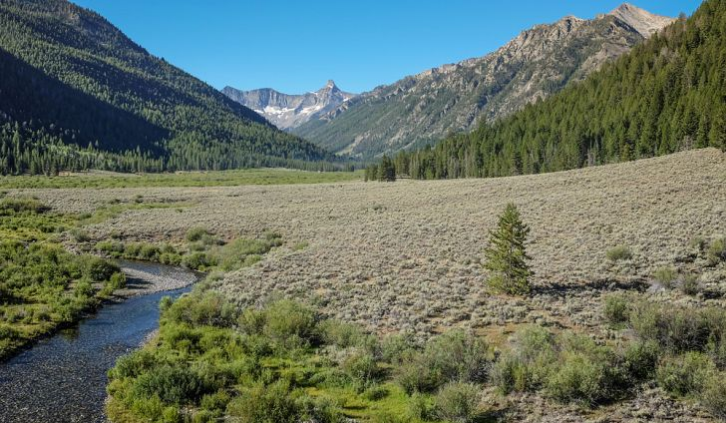 The Craighead Institute has been in operation since 1964 with a focus on research in designing and managing research projects that support conservation in the Northern Rockies.  Another focus is “…to maintain healthy populations of native plants, wildlife and people as part of sustainable, functioning ecosystems.”  Where on earth did they get the idea it was their job to maintain healthy populations of people?  Craighead is a partner with Banovich Wildscapes Foundation, an organization that, around the world, fosters “…cooperative efforts to conserve the earth’s wildlife and wild places benefiting the wildlife and the people that live there.”  As a Yellowstone to Yukon (Y2Y) partner, Craighead has assisted Y2Y with conservation for regional scale projects for habitat connectivity.

The Salmon-Challis area is a particular Craighead focus area and is part of the Y2Y High Divide.  While the video on High Divide connectivity has been removed from this Y2Y link, a similar one can be found here.  As part of their “collaboration”, Y2Y connects with  “…supporting partners, who are already in the region to scope out existing conservation efforts, identify gaps and determine where Y2Y’s large-landscape perspective can move efforts forward.”  Those partners include Salmon Valley Stewardship and Lemhi Regional Land Trust through their involvement in the Heart of the Rockies Initiative, and High Divide Collaborative, all of whom are currently involved in the Salmon-Challis National Forest plan revision, and who are “already in the region.”

Using GIS-based tools, Craighead has conducted a “fine-scale analyses at the parcel level” for mitigation and development in Madison Valley, Montana, with plans to bring the same to the High Divide “region” for “…laying the foundation for a development planning strategy which will preserve the qualities of the High Divide so critical to humans and wildlife.”  What this means is they have created tools in which to map the area for determining how it should be developed in the future, parcel by parcel.

As outlined in the document below, Craighead has three specific goals for the High Divide, restore connectivity for biodiversity in perpetuity from the Greater Yellowstone Ecosystem through the Central Idaho Wilderness Northern Continental Divide Ecosystem, and ensure connectivity for wolverine and grizzly as focal species surrogates for biodiversity.  Specific objectives to accomplish these goals in the High Divide include: obtaining more information on wildlife habitats, corridors and linkage areas; influencing counties, developers, landowners and state agencies on land use practices; “assisting counties” with land use policies, subdivision regulations, and development codes; improving site specific development proposals for mitigating rural development impacts on habitats and linkages; and reaching out to landowners to “assist” them in adopting wildlife stewardship practices.  Through years of research, Craighead has created a vision of conservation planning which includes deciding how land should be developed and used.

Corridors and connectivity are not about wildlife or conservation, it is about control over land use and people as Craighead has so eloquently laid out in this document.

In true technocratic fashion, even more specific objectives are outlined on how to achieve the above objectives.  A partial list includes purchasing private lands through land trusts; establishing conservation easements; preclude timber harvests, mineral extraction, and road development; and limiting hunting.  As everyone well understands, all of these activities are happening.

They also plan to interfere with local land use plans, telling landowners how to manage their property, and informing “recreationists” how to make their camps clean for wildlife, while “listing all strategies necessary to protect each route (migratory) segment, parcel by parcel.”  Workshops for local community planners and decision-makers is another objective to convince them to incorporate their objectives into land use plans. Y2Y accomplished this with an Idaho Transportation Department workshop to influence them for inclusion of wildlife overpasses in projects.  Talk about the intent to micromanage people, and violate law, it is just the beginning of what they have planned.

Believing we are too ignorant in managing our own lives, there is also an educational component to their agenda which includes educating the populace on why connectivity is so important.  They will also go after our children to indoctrinate them in the classroom on climate change, connectivity and land use, and then monitoring how many schools and what grades use them.  If that isn’t bad enough there is also the intent to conduct student and teacher surveys to measure effectiveness of classroom lessons, assessing how much they have been indoctrinated.

Is not all of this violating our Republic?  Influencing elected officials which violates a citizen’s right to representation and inserting themselves into classroom instruction, bypassing local school board representation?  These organizations have no respect for, or recognition of, our governance as a Republic. 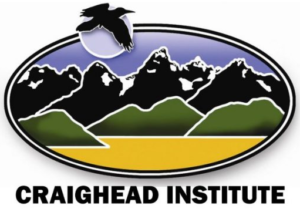 The High Divide region straddles Montana and Idaho and is home to numerous mountain ranges, valleys and rivers including the Madison and Jefferson Rivers; theTobacco Root Mountains; and the Madison, Bighole and Centennial Valleys. Adjacent to the Greater Yellowstone Ecosystem (GYE), experts consider it one of the most intact biological areas in the lower 48 states, with abundant wildlife populations of elk, antelope, and deer. The region is also critically important for wolverine and grizzly bear recovery. It is not surprising that this scenic landscape and abundant wildlife have attracted many new residents to the area. This ongoing development, however, has led to an increase in road density, habitat fragmentation, and human-wildlife interaction. 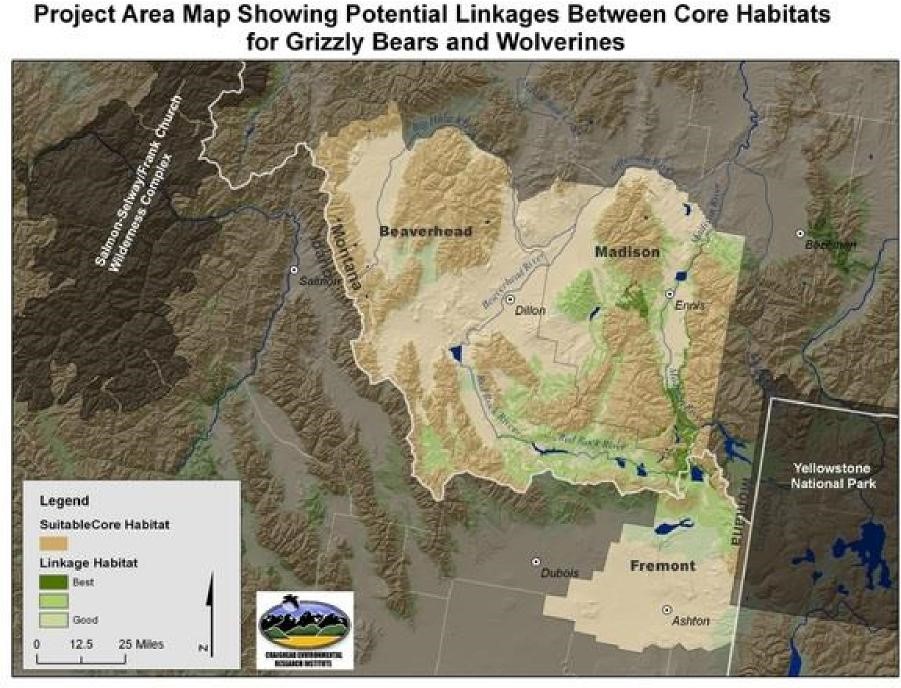 The Craighead Institute believes that development that respects wildlife habitat and corridors is possible. However, it must be founded in good science based on the best available data. 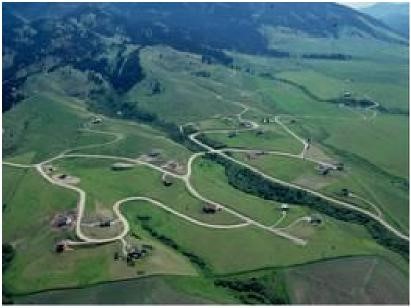 Planners, wildlife managers, and landowners need access to this information in an understandable and applicable format in order to make informed decisions about future development. The Craighead Institute engages landowners, planners and government entities in a collaborative process to guide development, inform land-use decisions and improve land stewardship so that wildlife linkage routes are maintained in the High Divide region. 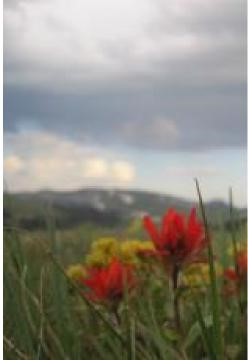 Currently there are several broad conservation initiatives focusing on the High Divide. These include the Heart of the Rockies High Divide Collaborative with support from the Great Northern Large Landscape Cooperative; Yellowstone to  Yukon; and a collaboration between the National Fish and Wildlife Foundation and a diverse group of stakeholders in the region. Craighead Institute involvement expands on our current land-use planning initiative in the Madison Valley which incorporates the most extensive and current data on wildlife conservation into subdivision regulations for the county. Using GIS-based tools developed by our staff, this framework provides fine-scale analyses at the

parcel level, enabling decision-makers to determine areas that warrant unique mitigation, balancing development with wildlife corridor integrity, and it includes planning for transmission line locations. Based on success to date with local stakeholders and conservation partners, the next step is to expand this process to neighboring counties in the High Divide region. The Craighead Institute is laying the foundation for a development planning strategy which will preserve the qualities of the High Divide so critical to humans and wildlife.

Craighead staff often collaborate closely with Future West to help with facilitating meetings and implementing the results into county planning processes. The approach outlined here will allow appropriate development of subdivisions, their supporting infrastructure, and accompanying commercial developments without forming barriers to wildlife movement. It will offer alternatives to minimize the negative impacts of rural subdivisions on the best wildlife areas, thus maintaining connectivity to a large complex of unfragmented wildlife habitat in the High Divide, and providing space for animals to respond to development pressures and climate change. 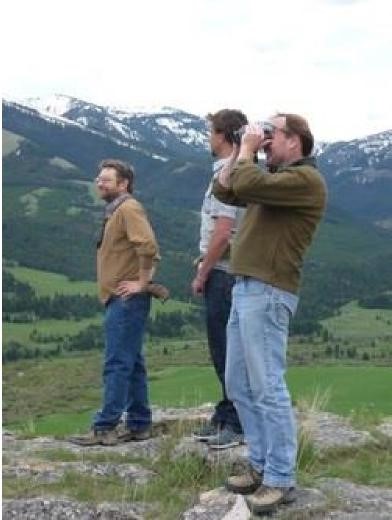 The overall goals of our High Divide Work are:

Goal 1: To maintain and/or restore connectivity for biodiversity between the GYE and Central

Idaho Wilderness through the High Divide region, for perpetuity.

Goal 2: To maintain and/or restore connectivity for biodiversity between the GYE and Northern Continental Divide Ecosystem through the High Divide region, for perpetuity.

Goal 3: To ensure connectivity for wolverine and grizzly bear as focal species surrogates for biodiversity.

Identifying priority actions in the High Divide region that counties, developers, landowners and state agencies can take to better manage growth and land use practices in a manner that reduces impacts on habitats and habitat linkages and on the fiscal well­being of the counties.

Identify and prioritize the best routes, and alternatives, for animals (grizzly bear and wolverine) to travel without coming into conflict with human beings between the GYE and Central Idaho Wilderness. Routes should be mapped and inventoried at the finest scale possible to facilitate other objectives.

Secure protection of those routes from development and disturbance by human activities that would impede movement of wildlife species. Such protection would include these strategies:

Purchase of private lands by land trusts or other agencies

Limiting hunting activities under direction of State wildlife management agencies to allow species such as grizzly bears, lynx, and fisher, to re-colonize previous habitat without being harvested as they travel.

Providing sportsmen and recreationists with information and support to make their camps and activities clean and secure so that wildlife conflicts do not occur, and so their activities have minimal impact on habitat and wildlife behavior.

Educate and inform people in local communities, and the general public, of the importance of connectivity to provide wildlife species with options for movement and survival as the climate changes. Educational activities would include:

Classroom modules to introduce students to the topics of climate, climate change, habitat, ecology, connectivity, and land use.

Evaluate the success of strategies and adapt to use most effective approaches. Evaluation can include:

Listing all strategies necessary to protect each route segment, parcel by parcel, or management unit by management unit, at the beginning of the process.

Determining which strategies have been completed successfully, and which remain to be implemented, at each benchmark date.

Considering other strategies to replace those that are not successful.

Monitoring populations and individuals of wolverine and grizzly bear to determine population status and movement through connectivity habitat.

Conducting surveys of the general public at the beginning of this process and at periods throughout the process to determine the state of public awareness of the concepts being discussed.

. Monitoring the use of classroom modules; how many schools are using them, what grades

Not only does Craighead have a plan for taking over how land is used with their partners, they also buy their gains, having appropriated funds for land acquisition in the Salmon, Middle Fork, $1,837,000, and Clearwater, Middle Fork, $2,909,800 as part of their wild and scenic designation.

Only their 2013 tax form is listed on the Craighead website with $126,487 listed as assets, and total support in the amount of $1,886,773.  Some interesting contributors were the Western Transportation Institute, Sonoran, Patagonia, and Wilburforce.  Interestingly, Craighead also has their nose in Canada, having planned a resort and golf course near Banff for wildlife connectivity but was “tabled” because of local opposition.  Local opposition can get these agendas stopped.  Only $202,103 is listed in assets on the 2017 tax form in spite of $1,119,780 in total support.

As a side note, Sonoran is another institute that believes they know best on how we should live our lives.  Federal agencies are  partners with Sonoran and the US Fish & Wildlife Services donated somewhere up to $99,999 of your tax dollars to them in 2018.

Idaho needs to take note of the Salmon-Challis area and organizations and individuals working behind the scenes to determine their future, in a multitude of ways.  Every city and county in Idaho should be looking for the same individuals, organizations, and agendas in their community.  Otherwise, without direct opposition from the community, they will determine the way in which your communities will look.