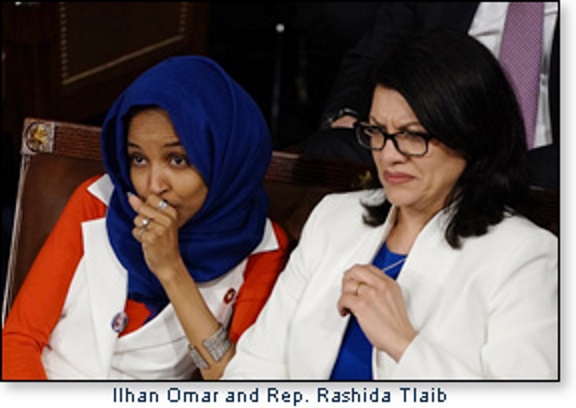 Throughout the ages, Jews have been the targets of genocidal forces both large and small, educated and ignorant, liberal and conservative, pagan and religious.

Other small sects and religions have never inspired the particular psychotic animus that Jews have because they never threatened the larger populace as Jews have with blazing green-eyed jealousy – the most powerful emotion of the human species. In fact, Proverb 14 states: “A heart at peace gives life to the body, but envy makes the bones rot.”

After all, Jews were the first people in history to:

And yet the Jews of the world are still here, still flourishing wherever they live, and still driving anti-Semites to the brink of clinical insanity as they try to cope with their utter and abject failure to do what Hitler and all the others also failed to do – destroy the Jewish people.

Don’t these idiots know that will never happen? Only if they converted to Judaism would they appreciate that the God of Abraham, Isaac, and Jacob insured repeatedly it would never happen. And it never has…and it never will!

Yet, the Jew haters plod ahead, as we can see by the new Sludge Sisters in the U.S. Congress – Rep. Ilhan Omar (D-MN) and Rep. Rashida Tlaib (D-MI) – and their sycophantic supporters, including the Speaker of the House Nancy Pelosi, who is so intimidated by these far-left racists that she has rewarded them with influential positions on House committees.

She even gave the vulgar Rep. Tlaib the distinct honor of becoming the first Muslim woman to preside over the House floor. This is exactly what panderers like Pelosi do when they fear being displaced by more powerful pimps.

As writer, lawyer, and Rabbi Dov Fischer notes: “And now the winds of Jew-hate have come to America’s Democrat Party…rooted in the core of the party…. Nancy Pelosi and Steny Hoyer have counted the tea leaves and…determined that it is bad Democrat politics to call out the Jew haters and Nazis in their party for what they are: Jew haters and Nazis.”

In a recent article, I offered a definition of sludge: a muddy mixture of dirt, muck, dregs, contaminants, filth. We’re all familiar with this ugly slime, which often contains human and animal feces, toxic drugs, nuclear waste, etc. Big yuck!

In that article, I also stated my Vessel Theory of human behavior, which is simply that no matter how fancy or decorative a vessel appears to be, the real measure of its value is its contents. A beautiful crystal vase, for instance, might contain urine; a ceramic creation, vomit – while a plain vessel might pour out pure spring water. 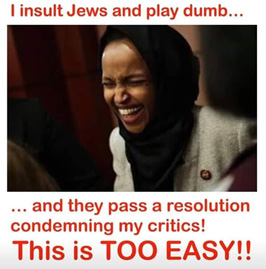 Lesson: what’s inside is the real thing!

And under the Sludge Sister umbrella are like-minded men like the longtime leader of anti-Israel groups James Zogby, as well as ole reliables like “Rev.” Jesse Jackson, “Rev.” Al Sharpton, “Rev.” Louis Farrakhan, and too many Democrat members Congress to list here….again the list is long.

We are witnessing yet another grotesque mutation of anti-Semitism, propounded exclusively by Democrats – who get millions upon millions of dollars from Arab nations and who apparently imbibed their hatred with mother’s milk, who conveniently ignore the reality of or – for all we know – silently applaud jihadist children wrapped and strapped in suicide vests, who subscribe not to the U.S. Constitution but to Sharia Law – a law that subjugates women, endorses wife-beating, murders homosexuals, embraces honor killings, and widely practices female genital mutilation, as described here in gruesome detail by professor/author Phyllis Chesler. And that’s the short list!

According to Mychal Massie, an ordained minister and founder and chairman of the think-tank The Racial Policy Center (RPC), Reps. Omar and Rashida “are rabid anti-Semite Muslim bigots and haters of America…uncouth, common, contumacious daughters of evil, who find America and Israel objectionable but somehow overlook the treatment of Islamic women and female children.

“There have been 34,925 terrorist attacks worldwide since the deadly American attacks on 9/11,” Rev. Massie continues. “Where is their compassion for the people those of their religion have slaughtered?”

But why is this a subject in 21st century America? If our “culture” really believed that rank racists like Reps. Omar and Tlaib should be condemned and marginalized – the way singer Kate Smith’s performance of God Bless America during the seventh-inning stretch at Yankee Stadium was banned after almost 20 years because she supposedly sang a song with a racist lyric over 70 years ago – the Sludge Sisters would already have been relegated to eternal ignominy.

Exactly! And our politics is fueled by left-wing media whores, all of whom take their marching orders from their globalist bosses – honchos who have been deeply complicit in the hate-Trump mania for the past three years and have purposely – and malevolently – concealed the astounding accomplishments of the most pro-American and pro-Israel president in American history because of their vast international investments which are now threatened by an America-First president.

While they try to blame the president for the shootings of innocent Jews attending synagogue services, it is they themselves who scapegoat and vilify Jews for the good of the Democrat Party, which requires them to embrace the Sludge Sisters and their ilk. In fact, the Clarion Project credibly accuses “many mainstream media newspapers [of joining] the New York Times in shilling for the Muslim Brotherhood.”

As Greenfield notes: “American politics…is full of politically active people who will defend anti-Semites against charges of anti-Semitism because they agree with them on the rest of their political agenda.” 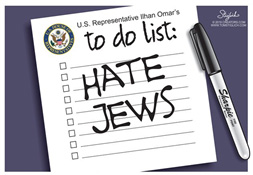 Not that proof is needed beyond watching the Sludge Sisters in action, but writer David Catron describes the deeply vile nature of Rep. Tlaib at a C-SPAN presentation this month, where she told the audience that “There’s always kind of a calming feeling, I tell folks, when I think of the Holocaust, and the tragedy of the Holocaust, and the fact that it was my ancestors – Palestinians – who lost their land and some lost their lives, their livelihood, their human dignity, their existence in many ways, have been wiped out, and some people’s passports.”

According to Catron, “Every semi-coherent syllable of Tlaib’s word salad is pure fiction,” a fact expanded upon by Abe Greenwald in Commentary Magazine.

“Disease is reversible – rot isn’t,” Greenwald writes. Reps. Omar and Tlaib brought the disease of anti-Semitism into the upper echelons of the Democratic Party when they were elected in November. The party could have fought the disease. It chose instead to nurture it. And that’s when the irreversible rot set in.”

Greenwald also corrects Tlaib’s egregious historical-revisionist fantasy about her “ancestors.” At the time, he says, “Haj Amin al-Husseini, the grand mufti of Jerusalem, was a supporter and ally of Hitler. When the two met, al-Husseini told Hitler that they shared the same enemies: ‘the English, the Jews, and the Communists.’ The two went on to scheme about how best to set upon and destroy the Jews of the Middle East. What’s more, the Arabs regularly massacred Jews in Mandatory Palestine.”

“Lies,” Greenwald explains, “are the lifeblood of anti-Semitism…. it depends on lies because its very motive is to hide the truth of one’s own failings and lay blame on the Jews.”

Writer Ari Lieberman adds that “Tlaib’s ancestors, the so-called champions of safe haven for the Jews, rejected outright the 1947 United Nations Partition Plan, sparking a conflict which resulted in their defeat. Far from benevolence, the Palestinians exhibited hate, xenophobia and anti-Semitism in the extreme, and likely would have perpetrated mass ethnic cleansing and a second Holocaust had they won the war. The anti-Semitic attitudes exhibited by the Palestinians in the 1920s, 1930s and 1940s are no different than they are today.”

No surprise. One of the arch tenets of Islam is taqiyyah, which approves of and indeed encourages Muslims to lie in the service of their larger goal – to establish a worldwide caliphate under Sharia Law. As Americans have already witnessed, the Muslim invasion of Europe and the Scandinavian countries has already overtaken those countries…and now their target is America the Beautiful. 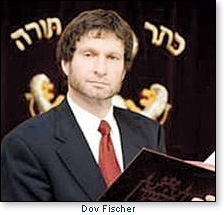 As Dov Fischer stated: “It is not just about Ilhan Omar and Rashida Tlaib. They are two blips of time, two mistakes that will be ignored by future American historians.” Rather, the problem for all decent non-racist people (the majority of Americans, I believe) is multifold.

It is about the Democrat House that recently defeated a resolution to condemn the Boycott-Divest-and-Sanction (BDS) movement designed to strangle Israel economically.

It is about the significant number of Jewish Democrats – many in positions of great power in the U.S. Congress (like Senate Minority Leader Schumer) – who have remained thunderously mute over these last many months as the anti-Semites in their Party spewed hatred of Jews and Israel on a daily basis.

These are the cowardly Jewish DEMOCRATS in the 116th Senate and House who have said NOTHING as the new flock of anti-Semites have, in essence, vowed to destroy them and all of world Jewry and Israel itself! The two Jewish Republicans – David Kutsoff (R-TN) and Lee Zeldin (R-NY) – are the only exceptions of this list to speak out forcefully against the Sludges out there and anti-Semitism in general. 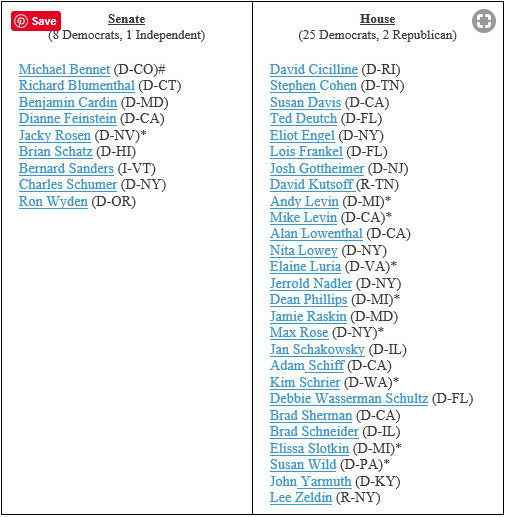 Never has it been more true that SILENCE IS CONSENT! And this is not only consent, not only approval and reward, this is collaboration!

Writer Karen McQuillan knows this species well. In her stunning article “Democrats Rally Around Their Anti-Semites,” she writes: “The Democrats’ embrace of multicultural anti-Semites such as Tlaib, Omar, and Ocasio-Cortez poses a danger to our country – both morally and politically. No nation has ever embraced anti-Semitism and remained a decent country for its own citizens. This is a path we do not want to go down, because down it leads.”

And most significantly, to my mind, it is about the large number of Jewish
Americans –