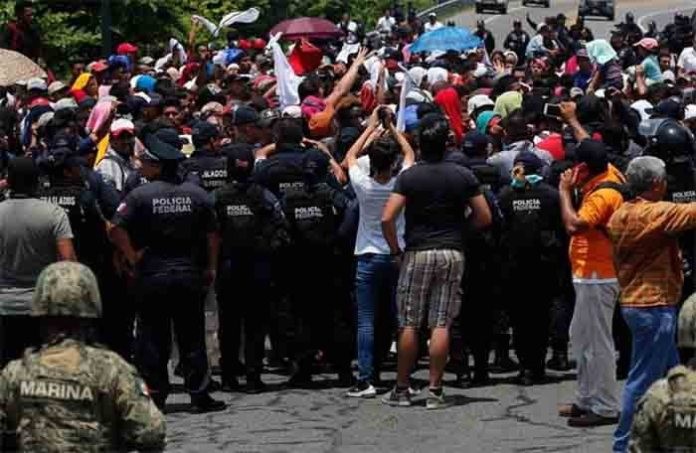 A caravan of 1,000 Central American migrants on their way north was stopped by a special law enforcement unit [unarmed] of the Mexican government. Keep in mind that the equivalent of a caravan comes through the border each day and we now average more than 4200 migrants aka illegal aliens captured each day.

Those are the ones we know about.

Also worth noting is the fact that one-third of Guatemala alone plans to come here illegally. Also noteworthy is the fact that the fake refugees, and most are fake, are renting babies so they can’t be deported.

Stopping a caravan of 1,000 is almost nothing, but it’s a start. However, they only said they will try to stop them. “Try” is not good enough.

The group of migrants are allegedly from Honduras, El Salvador and Guatemala, including many women and children.  They left Ciudad Hidalgo at the Mexico-Guatemala border early Wednesday morning and were bound for Tapachula, the principal city in the region.

The special unit of 200 military police, immigration agents and federal officers formed a blockade about 11 miles outside of Tapachula near the town of Metapa to confront the caravan, which was accompanied by state and local police.

Some fought the unarmed agents and had to be wrestled to the ground. Others jumped fences and ran off. Most complied allegedly.

About 600-800 illegal aliens were taken to the detention center. The rest fled.

What is also interesting is the communist open borders group, Portal Fronterizo, is involved. They work closely with open borders socialists and communists in the United States.

While I suppose I should be grateful, I only see this as more fluff and a mere performance. They want it to look like a crackdown, but it’s probably a show. President Lopez Obrador wants the U.S. invaded. He campaigned on it.