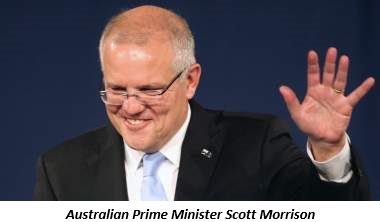 “It Was Supposed to Be Australia’s Climate Change Election. What Happened?” That was the headline of an election news analysis piece by Damien Cave for the New York Times on May 19.

Matt McDonald at ABC, the Australian government-run TV-radio network (Australia’s equivalent of the UK’s BBC), was similarly shocked. His headline: “Election 2019: What happened to the climate change vote we heard about?” ABC, like the BBC and most other Big Media organs, has been over the top in flogging the necessity of taking drastic action to spare the planet from the supposed dire consequences of anthropogenic (manmade) global warming, or AGW.

“It was supposed to be the big issue of the 2019 Australian federal election: climate change,” wrote McDonald, a political science professor and AGW activist at the University of Queensland. “A range of polls and surveys had left many analysts, myself included, with the sense that this would be a crucial issue at the ballot box.”

Similar headlines have been gracing papers, news sites, and evening broadcasts around the globe for the past week, as commentators and political analysts try to come to grips with yet another instance of “populist” resistance to globalist agendas. In this latest case, those crazy, Aussie deplorables rejected Labor’s Bill Shorten and his version of Alexandria Ocasio-Cortez’s Green New Deal. How is that possible? It was supposed to be a slam dunk for Shorten. Everybody said so — over and over again. But, in a replay of Politics 2016, the “everybody says so” wisdom was once again roundly repudiated.

Remember 2016? Hillary Clinton was going to beat Donald Trump in a landslide. Right?

Brits really wanted to remain in the European Union and would handily defeat the Brexit efforts. Right?

All the political “experts” said so.

All the pollsters said so.

All the Big Media chattering heads said so.

All the comedians, celebrities, and hipsters said so.

And when it came to Australia’s federal election last week, the so-called experts — not just in Australia, but globally — were proven stunningly off beam once again. The powers that be had anointed Bill Shorten, the ultra-left Labor Party star, to become Australia’s next prime minister. For months, the purveyors of supposed wisdom had proclaimed Shorten’s victory as a sure thing. Shorten and the Labor Party had made action on climate change a centerpiece of their campaign. The sitting prime minister, Scott Morrison (shown), presiding over the National Party/Liberal Party Coalition, was supposed to be unelectable. It would be a green cakewalk for Shorten and Labor.

The voters thought otherwise. Australian Prime Minister Scott Morrison’s stunning upset re-election victory is now causing another collective wailing and gnashing of teeth amongst the green glitterati and the Morrison obituary writers, as they ask “What did we get wrong?”

Penn State climatologist Michael Mann, creator of the fraudulent “Hockey Stick” chart, lamented in a ThinkProgress post: “We have lost Australia for now. A coalition of a small number of bad actors now threaten the survivability of our species.” Mann, who is one of the most vicious attackers of fellow scientists, academics, and pundits that disagree with his extreme alarmism (see here and here), says that now “we must redouble our efforts to make sure that the rest of the world works even harder to act on climate. The stakes are too great to simply give up.”

The wailers and teeth gnashers got several things very wrong. “The polls said this would be Australia’s climate change election, when voters confronted harsh reality and elected leaders who would tackle the problem,” Damien Caves of the Times wrote in the piece cited above. “But overall, Australians shrugged off the warming seas killing the Great Barrier Reef and the extreme drought punishing farmers. On Saturday, in a result that stunned most analysts, they re-elected the conservative coalition that has long resisted plans to sharply cut down on carbon emissions and coal.”

Caves, like other observers, noted the fact that much of Morrison’s crucial support came from voters in working class areas traditionally considered as Labor strongholds. This was particularly true, he wrote, with regard to the “surge of support in Queensland, the rural, coal-producing, sparsely populated state sometimes compared to the American South.”

As with the nattering nabobs of the elite media in the U.S., the controlled Australian media commentators project the disdain of snobbish urbanites that view working people, especially those working in natural resource industries such as farming, ranching, logging, mining, and fishing, as uneducated boobs who are despoiling Mother Nature. Cave reports, as have others, that while Shorten did well among the Greenpeace types, student activists, and wealthier urban populations, his Laborites lost much of their blue-collar base.

In some ways it was a clash of cultures as well as political views.

“I feel like there’s quite a lot of scorn about the way Queenslanders feel about environmental issues, and that doesn’t help,” said Susan Harris-Rimmer, a law professor at Griffith University in Queensland. “The predominant Queensland characteristic is pride and you can’t pour scorn on them.”

She said doing so was a strategic mistake for politicians comparable to Hillary Clinton’s description of some Donald Trump supporters as “deplorables” during the 2016 United States presidential election.

“One of the most intriguing takeaways from the 18th May Federal Election in Australia is how poorly Labor’s climate action political campaign focus played in working class areas,” comments Worrall. “This isn’t the first time the climate movement has misjudged their audience,” he reminds us. “The wealthy elitism of the climate movement was on full display during the recent Extinction Rebellion shutdown of central London. During the ‘rebellion,’ leisure rich dilettante hippies partied in London, creating commuter misery for people who have to work for a living. Yet the out of touch Extinction Rebellion hippies somehow thought that raising ‘awareness’ of climate change, by mocking workers with their privilege, would win support from the victims of their disruption.” (For more on this, see: “Extinction Rebellion: Climate Protesters in Search of a Crisis.”)

Liberal-left commentators have correctly noted that Morrison’s victory among middle class/working class voters (including traditional Labor voters) parallels closely President Trump’s inroads into former Democrat “Rust Belt” territory. ABC’s Prof. McDonald observed, “Voters feared climate policy more than climate change. In this election, Australians were suddenly faced with a prospective Labor Government ready with a suite of measures to tackle climate change. And they were presented with an account of these measures as a devastating economic blow to Australian prosperity and growth.”

For one thing, Australian voters apparently understood that the 45 percent reduction in carbon emissions proposed in Shorten’s Labor program would kill Australia’s economy. According to a study by economist Brian Fisher, the Labor climate program would wipe out 167,000 jobs and cost at least 264 billion Australian dollars (around 181 billion American dollars). However, the price tag could turn out to be even higher, around $542 billion Australian, depending on a multitude of factors concerning interpretation and implementation of a host of new rules and regulations. Shorten did not help things by repeatedly refusing to answer critics by putting a price tag on his green new deal.

Australian Jo Nova, the always-perceptive climate realist, wrote of the historic vote: “Against all the polls, the money, advertising, and the non-stop media coverage, against all expectations and the betting agencies — the Extreme Climate Fix was a flop.”

“The Labor Plan to cut Australian emissions by 45% percent is now gone — per capita this would have been a world record sacrifice in a country already increasing their renewable energy faster than any other,” noted Mrs. Nova. “Major betting agency Sportsbet were so sure Labor would win they paid out $1.3 million on bets two days early.”

“They called this a climate election and the people voted ‘No,’” she wrote. “Activists thought it was safe to piggy back on a ‘sure thing,’ and they went in hard. Volunteers even wore bright orange “I’m a climate voter” T-shirts.”

Greenpeace crowed, “This will be a climate election.” Much of the media had played up a Greenpeace-commissioned survey by uComm/Research showing global warming and the environment to be “the number one issue for Australians, with one in four saying it was the most influential issue when deciding their vote.”

“Make this a climate election” was also the rallying cry of the “progressive” GetUp coalition and other leftwing enviro groups.

It didn’t work out as they had planned.

“If Labor had won, they would be crowing right now about how it proved the people wanted action,” commented Nova. “Political pollsters bullied and badgered voters. Labor was tipped to win decisively in every poll. Even in the exit polls. So thousands of people told pollsters one thing, then they voted the other way, and hid that again on the way out the polling door.”

“This was not just the abject failure of climate change as a vote winner, it was also a crashing fail for the pollsters,” Nova observed. “Australians have been badgered and bullied into saying they believe in climate change and prefer the left-leaning parties. (They knew it was uncool to vote ‘right.’) But when the time came, they voted against them both. Bullying works in public, but people vote alone.”

Climate Change: It’s Not That Complicated

Extinction Rebellion: Climate Protesters in Search of a Crisis

Professor Judith Curry Resigns Due to “Craziness” Over Climate Science

What on Earth Is Happening to Our Temperature? (Is 2016 hottest year on record?)