Work continues from the district

Work continues from the district 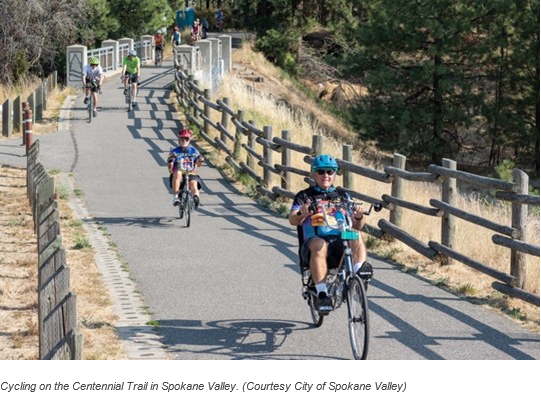 The 2019 legislative session is over, and many of us are still coming to terms with the aftermath of the majority implementation of its agenda. There was a lack of transparency and proper legislative process that saw major tax hikes passing during late night hours of the last days of the session. Amazingly, this was happening during a time of record revenue coming into the state treasury from a booming economy.

It was a tough session, but we were able to get some victories, a few of which have recently been signed into law. You can read about one of these bills, along with other updates, in the following Report from Olympia e-newsletter.

I’m glad to be back at home in our district, once again surrounded by family, and friends and neighbors such as yourself. On May 6, we reopened our district office at 408 N. Mullan Road in Spokane Valley. Our phone number is (509) 921-2460. My legislative assistant, Janet, will be here Monday through Friday, 8:30 a.m. to 4:30 p.m. So please stop by or call if you would like to share your thoughts on the 2019 session or want to get a jump-start on an issue for next session.

We have also published a new edition of our Government Guide, which is a handy directory of contact information for government offices and service providers in the 4th Legislative District. If you did not receive a copy in the mail, feel free to stop by the district office and pick one up. You can also call us and we will be glad to send you a copy. Also, this directory is available online for you to download anytime.

Even though the session is over, my staff and I are still hard at work for the people of our district, and our state as a whole. Representing you is both an honor and a privilege, and we stand ready to serve! 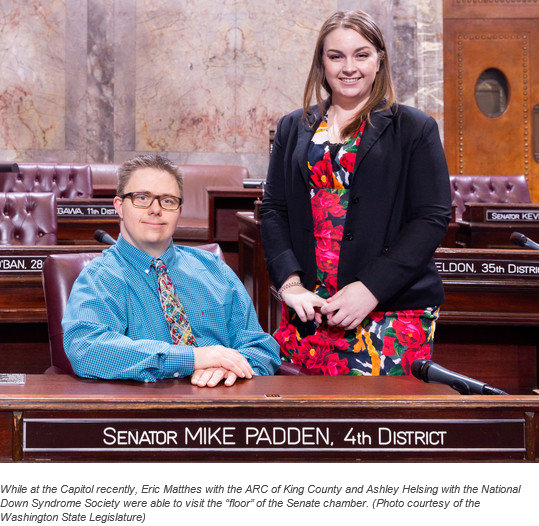 On May 8, my anti-discrimination legislation to protect people with developmental disabilities who are seeking organ transplants was signed into law.

Substitute Senate Bill 5405 cleared the Legislature on April 24 with unanimous support. I am pleased that Washington has spoken clearly, with one voice, that all lives have value. No transplant should be denied on the grounds of disability alone, and all those involved in making life-and-death decisions about eligibility should be clear about where the law stands on this important issue of justice and fairness.

Under the new law mental or physical disability can no longer be used as the sole reason to deny transplant eligibility, surgery, medical care, or insurance coverage related to a transplant. Disability also cannot be used as the sole reason for moving a transplant candidate to a lower-priority position on a waiting list. In addition, a person’s inability to comply with post-transplant medical requirements can’t be used as a reason for denial, if he or she has support from others who can provide assistance. Discrimination against those with disabilities is already prohibited under federal law.

I thank all of the advocates from across the state who helped get this bill into law, including our good friends Ashley Helsing with the National Down Syndrome Society and Eric Matthes with the ARC of King County who were both at the Capitol for the signing ceremony.

This new legislation alone won’t solve the problem; education and enforcement will be key to ending discrimination practices. We all have a responsibility to work towards a culture that has respect for all life, and views the value of all lives equally. But this new law is an important step in that march towards justice.

The law created by our bill will go into effect July 28. 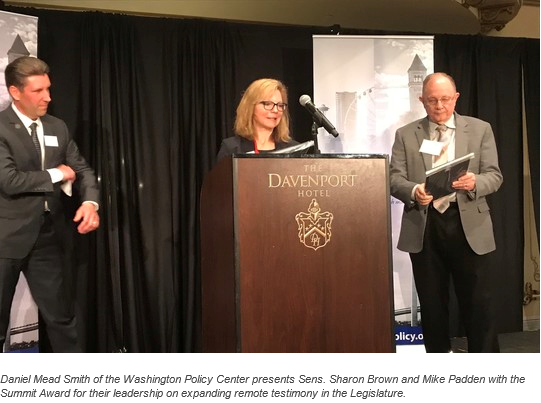 Earlier this week, Spokane hosted the Washington Policy Center’s Solutions Summit policy conference. It was a great event and I was pleased to take part in what is one of the state’s largest policy conferences, attended by hundreds of lawmakers, business and community leaders and citizen-activists.

Former Wisconsin governor Scott Walker was the keynote speaker. He urged conservatives to be prepared for the day when the voters hand power over state government to Republicans, pointing to the need to have reforms and solutions ready on day one.

As part of the conference, I was honored to be one of four lawmakers awarded the inaugural Summit Award, which we received in recognition of our successful efforts to strengthen the ability of citizens to participate in government via remote testimony. The other Senators recognized were Senators Sharon Brown, Andy Billig and Guy Palumbo.

As you might recall, our office was the first to demonstrate the potential of remote testimony, through a trial run from Spokane in 2013. Since that time, I have continued to work with my colleagues and others to keep pushing the Senate towards expansion of the pilot program, which finally occurred in 2019.

In The News: Title-only bills are an insult to democracy 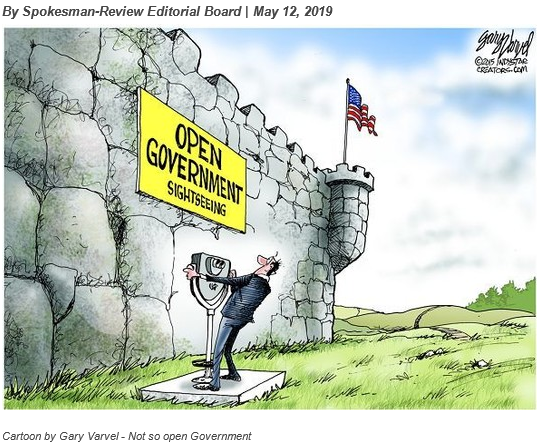 Democrats in the state Capitol weren’t about to let a little thing like the Washington Constitution stop them from raising taxes. As the legislative session wound down last weekend, they used a constitutional loophole to cut the public out of debate and pass the surprise tax increases. Closing that loophole should be the first order of business when lawmakers return to Olympia next year.

The constitution forbids introducing a bill less than 10 days before the end of session, not amending one. They therefore invented title-only bills.

As the name implies, those are bills with a title but no substance. They are empty vessels introduced before the 10-day deadline into which lawmakers can cram anything without having to get a two-thirds majority.

Title-only bills are a rush job. They almost always were negotiated behind closed doors and, as with the bank tax, are half-baked because they didn’t go through the normal legislative process. Washington deserves better.

In 2014, Republican lawmakers, including Spokane Valley Sen. Mike Padden and Rep. Matt Shea, sponsored legislation to ban title-only bills, but it went nowhere. Now that even some Democrats are condemning the practice, they ought to try again.

In The News: Improvements on I-90 in Liberty Lake and Spokane Valley 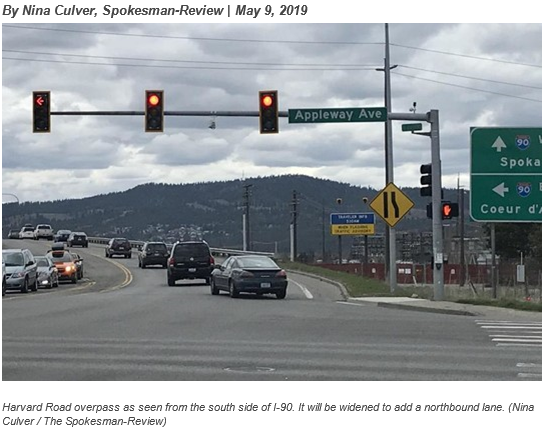 New road construction projects are coming to Interstate 90 in Liberty Lake and Spokane Valley. They are intended to ease congestion issues and make north-south travel a bit easier in the two communities. The Barker to Harvard project was requested by myself along with Representatives Shea and McCaslin. It had the support of the Cities of Liberty Lake, Spokane Valley, the Central Valley School District, Fire District One, Spokane County and the regional office of the Washington State Department of Transportation.

The recent transportation budget approved by the state Legislature contained $20.9 million for the widening of the Harvard Road Bridge over Interstate 90, the construction of a new I-90 overpass at Henry Road in Liberty Lake and building a roundabout on Barker Road at the I-90 westbound on- and off-ramps. 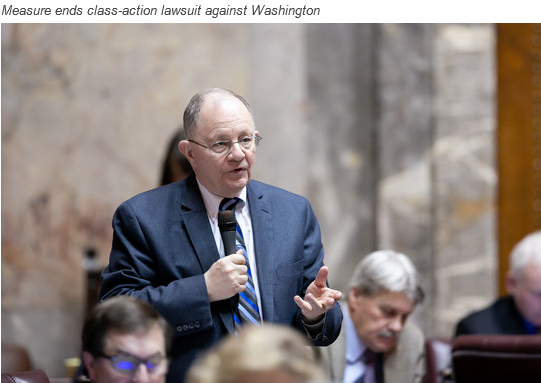 On April 30, the governor signed our bill preventing disclosure of the names of those who participated in the states bump-stock buy-back program. Sen. Jim Honeyford, R-Sunnyside, and I were able to work out a deal with the majority party in the House and Senate in the final hours of the 2019 session to get the measure to the floor in both chambers.

Ultimately, the measure passed with overwhelming support, clearing the Senate 39-7, and passing in the House 97-1. The bill included an emergency clause and went into effect immediately. The quick action means that a federal lawsuit that had been filed seeking to prevent the state from publicly disclosing the names of those who participated in the states buyback program will no longer go forward. 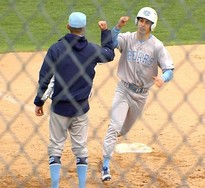 The Spokane Valley area is well represented in the WIAA State Baseball Tournament, which begins on Saturday, May 18.

The 2B Northwest Christian Crusaders face Brewster at 10 a.m. at Ferris High School.

The Freeman Scotties varsity baseball team has a division 1A playoff game vs. Royal (Royal City, Grant County) on Saturday at Larson Field in Moses Lake, at 10 a.m.

At the same time, the Central Valley Bears will be taking on Federal Way (King County) in the division 4A tournament at Everett Stadium.

The West Valley Eagles will be playing Columbia River (Vancouver, Clark County) in division 2A at 1 p.m. at Auburn High School.

The Mt. Spokane Wildcats have a division 3A battle against the Timberline Blazers from Lacey (Thurston County) at County Stadium in Yakima, at 10 a.m.

We wish all of our young Spokane Valley-area baseball and softball players the best of luck, and I want the players, coaches and parents to all know how proud we are of their hard work and dedication in reaching this point in the playoffs. Softball playoffs start next week. We look forward to recognizing their achievements.