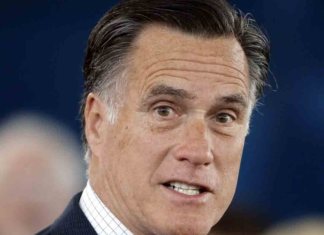 Sen. Mitt Romney (R-Utah) voted against one of President Trump’s judicial picks Tuesday over past controversial comments the judge made about former President Obama.

Romney cast the lone GOP no vote against Judge Michael Truncale, who was ultimately confirmed to the Eastern District of Texas by a 49-46 margin, The Hill reported.

Maybe because Obama’s a Marxist out to fundamentally transform the USA?

Truncale later explained to the Senate Judiciary Committee that he was “merely expressing frustration by what I perceived as a lack of overt patriotism on behalf of President Obama,” adding that he did not subscribe to “birtherism.”

That wasn’t good enough for Romney to act like a Republican.

“He made particularly disparaging comments about President Obama. And as the Republican nominee for president, I just couldn’t subscribe to that in a federal judge,” Romney told Politico in a brief interview.

“This was not a matter of qualifications or politics. This was something specifically to that issue as a former nominee of our party,” he added.

Romney cares more about attacking Trump any way he can than he does the country. Romney has taken John McCain’s place. Thanks a lot Utah!

And you will never be President you buffoon!

The hypocrite loved Donald Trump when he wanted his support for his candidacy for President in 2012, and he loved him again when he wanted to become Secretary of State.

He let Obama run roughshod over him in 2012 and we got stuck with the leftist who damaged the country for eight years and beyond. What a phony.

I am so deeply sorry for voting for Romney — forgive me readers!