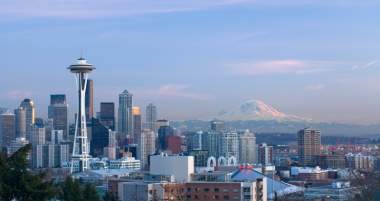 “Let me ask you something. What if Seattle is dying and we don’t even know it?” So begins Eric Johnson’s sobering look at present-day life in The Emerald City, a city in obvious advanced stages of decline. Seattle Is Dying is the title of a powerful hour-long documentary by Johnson, a news anchor for KOMO, the ABC News affiliate in Seattle. For visitors who may harbor fond memories of the city from its halcyon days of yore, the current images of streets, sidewalks, and neighborhoods strewn with filth, litter, garbage, and sprawling tent cities will come as a complete shock.

Even Seattle residents who have become anesthetized to the gradual degradation of their once-beautiful metropolis are waking up to the grim reality of their present fatal course. It’s not just the unsightly debris and filth, nor the obvious stench of the increasingly common human feces and urine on public sidewalks, nor the steadily growing presence of drug-addled homeless addicts and panhandlers wandering the streets. It’s also the fact that parents can no longer take their children to the beautiful parks where they formerly played because the lawns are littered with dangerous drug needles. Then there are the soaring rates of property crime and violent crime. 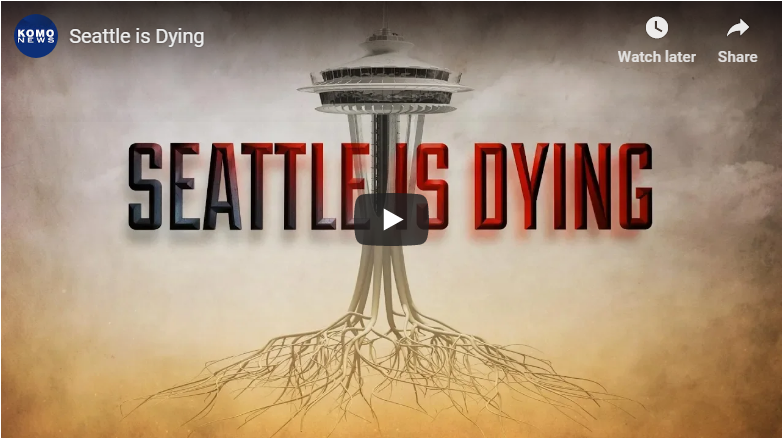 Seattle residents are increasingly embarrassed, exasperated, and outraged over this deteriorating situation, as is evident from interviews in the KOMO video.

Johnson’s unsparing presentation shows the seething anger of fed-up Seattleites bursting forth at raucous city council meetings. People are angry that the liberal-left mayor and city council have tied the hands of the police, while criminals are turned loose again and again to prey upon the city.

An unnamed police officer tells Johnson: “People come here because it’s called Free-attle and they believe if they come here they will get free food, free medical treatment, free mental health treatment, a free tent, free clothes and will be free of prosecution for just about everything; and they’re right. It didn’t used to be that way. Law enforcement officers used to be able to enforce the laws.”

Another officer says, “Even if quality warrant arrests are made, the judicial system sees fit to let them out of jail within a few days — often the next day. Why are we risking our lives to take felony level fugitives into custody if they are just going to be released?”

Yet another officer says there is no morale left among Seattle police officers, which is why they are leaving in droves.

One of the most disturbing parts of Seattle Is Dying is Johnson’s street interview with Travis Berge, one of Seattle’s most notorious, in-your-face criminals. Berge, identified as a 34-year-old “musician” and methamphetamine abuser from Reno, has been arrested numerous times for disturbing the peace, theft, attempted rape, assault on police officers, resisting arrest, and more. The program shows incidents from police body cams of various encounters where officers are attempting to arrest a violent and obviously high Berge, who screams, rages, spits on them, and attempts to bite them. During the interview, Berge is not only completely unapologetic about his criminal behavior, he is absolutely ebullient, ecstatic even, upon hearing that he rates among the Top 100 of the city’s most infamous offenders. He openly admits that he steals to feed his drug habit and says he tries to use meth “at least once a day.” Asked if he will continue his disruptive behavior, Berge exclaims, “Oh, I’m having a blast now. It’s so much fun!” He praises the so-called criminal justice system of Seattle. “They’ve really, like, exalted me,” he says, “and shown deference and love towards me.” Then, in a statement that indicts the city’s governing leaders even more than do the complaints of its citizens and police officers, Berge says: “I don’t feel like I’ll ever be arrested again. I haven’t been in jail for like a year and three months or so, you know.” All of this, he cheerfully explains, “definitely shows that I have conquered the criminal justice system.”

The People’s Republic of Seattle, Home of Lenin
This is what progressivism looks like: crime, filth, decay, drugs, homelessness, hopelessness. It is a depressing syndrome that is engulfing all the cities with which Seattle vies to prove itself the “bluest of the blue.” As cities go, it ranks up there with the other dying, Democrat-run urban centers afflicted with all the same social pathologies and symptoms of terminal decline: San Francisco, D.C., Chicago, Detroit, Oakland, Boston, Baltimore, and New York.

One of Seattle’s unique boasts is the honored public display of a massive bronze state of Communist demigod and mass-murderer Vladimir Lenin. The 16-foot tall, seven-ton monument honoring the Bolshevik leader and first dictator of Soviet Russia portrays Lenin boldly striding, as though leading the proletariat of the world into a glorious future. In reality, he was leading Russia — and much of the rest of the world that followed — into the terror of the abattoir, the gulag, the police state, and genocide. The statue was installed in Poprad, Czechoslovakia, in 1987, while the people of that nation were suffering under the communist dictatorship of Miloš Jakeš, the Czech stooge of Soviet Russia. Following the collapse (or fake collapse) of the communist Czech regime in 1989, the Lenin statue was torn down and scheduled to be melted down. But, Lewis Carpenter, who was teaching English in Poprad, rescued it from its deserved oblivion. Carpenter bought the statue and had it transported to his hometown of Issaquah, Washington, a town of 30,000 near Seattle. 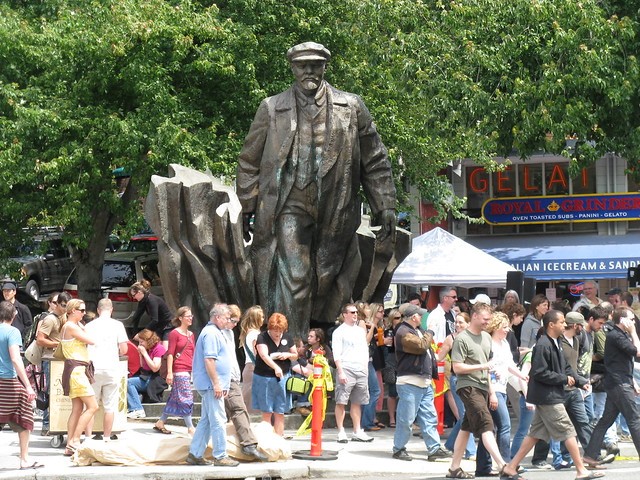 Since 1996, the Lenin monument has stood at the intersection of North 36th Street and Evanston Avenue North in Seattle’s artsy-trendy Fremont district. Are any of the “progressives” of Seattle (or the rest of the country, for that matter) who are demanding that statues and monuments of Christopher Columbus, St. Father Junipero Serra, Robert E. Lee, Stonewall Jackson, Thomas Jefferson, George Washington, and other “racist, capitalist oppressors” be demolished concerned at all that prominently honoring this blood-drenched Bolshevik is inappropriate, to say the least? Apparently not. In fact, in 2017, Seattle Mayor Ed Murray demanded that a monument to Confederate soldiers in the Lake View Cemetery, a private cemetery, be removed.

Mayor Murray, heralded in 2015 as “One of America’s Most Progressive Mayors”  declared in a press statement:

We must remove statues and flags that represent this country’s abhorrent history of slavery and oppression based on the color of people’s skin. It is the right thing to do. During this troubling time when neo-Nazis and white power groups are escalating their racist activity, Seattle needs to join with cities and towns across the country who are sending a strong message by taking these archaic symbols down.

Moreover, said Murray, “As we continue our ongoing proactive work to be an inclusive and welcoming community, we must also join the fight against the mainstreaming of hateful and despicable far-right political ideology.”

How about the mainstreaming of hateful and despicable far-left ideology, as represented by proto-communist Lenin? He sits atop the infamous pantheon of blood-soaked mass murderers that includes Stalin, Mao, Castro, Che, Ortega, Tito, Dubcek, Ceausescu, Ho Chi Minh, Pol Pot, and a host of additional Red tyrants.

Mayor Ed Murray, Seattle’s “first gay mayor” and an ardent LGBTQ activist, resigned in 2017, amid a series of accusations by five men that Murray had sexually abused them while they were young boys. Seattle’s current mayor, Jenny Durkan, is the city’s “first lesbian mayor” and like Murray, a true-blue progressive. She was a Barack Obama appointee as the United States Attorney for the Western District of Washington. She was rumored to be on the short list to replace retiring Attorney General Eric Holder, but President Obama chose Loretta Lynch instead to run the Justice Department.

Naturally, Durkan was endorsed for mayor by the LGBTQ progressives at the Human Rights Campaign (HRC). “Jenny Durkan is a proven leader with a passion for justice, fairness, and equality,” said JoDee Winterhof, HRC Senior Vice President for Policy and Political Affairs, in an HRC press statement. “As the first out LGBTQ U.S. Attorney appointed by President Obama, Durkan knows the importance of leading by example and has a clear vision to make Seattle an even stronger and more vibrant community. We are proud to endorse Jenny Durkan for mayor of Seattle.”

Apparently Mayor Durkan’s “clear vision,” her commitment to “human rights,” and her “passion for justice, fairness, and equality,” are subject to the same schizophrenic political correctness that rules most of her political comrades in the People’s Republic of Seattle. Would she tolerate a monument to Hitler or Mussolini on public land in “The City of Goodwill”? Not a chance — and rightfully so. But Comrade Lenin is just fine.

If the Fremont shrine to Lenin is torn down and the Marxist-Leninist agenda he represents is expunged from the city’s policies, statutes, and codes, Seattle may have a chance of recovery. Until then, Seattle will continue dying.

Golden No Longer: Is California Doomed?

California: How Far Left Can It Go?

KGB/FSB: The “Game” Remains the Same