What’s Behind the Epidemic of Chronic Teacher Absenteeism? 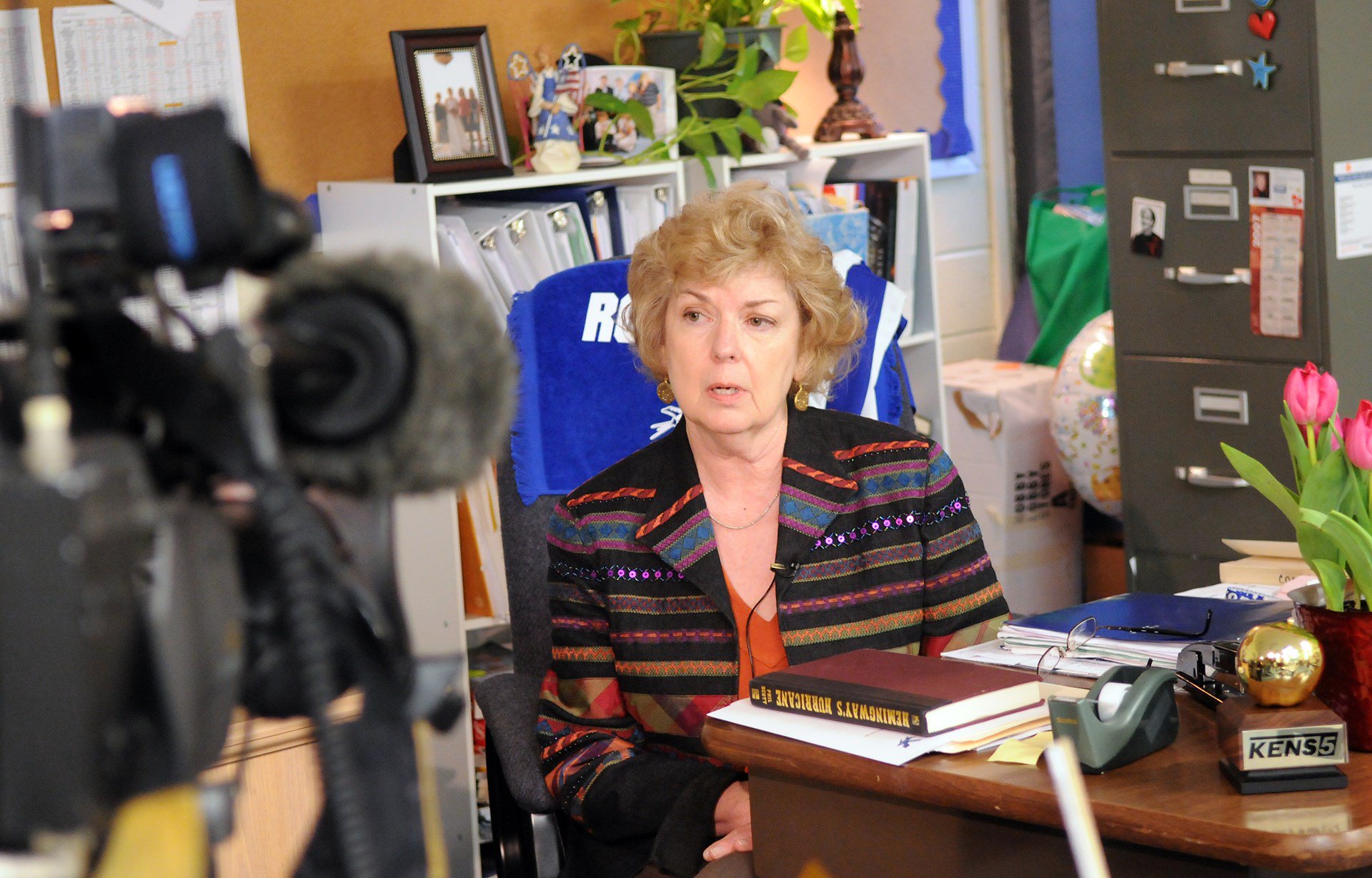 What’s Behind the Epidemic of Chronic Teacher Absenteeism?

After he had been gone for two days with pneumonia, a teacher told me that those were only two of the three days of absence he had ever used due to sickness in a 13-year career. It’s not that he had never used a sick day. He had used every sick day ever allotted to him; rather, only three times had he ever used a sick day for an actual illness.

These conversations are common in teacher workrooms. I’ll be gone Thursday and Friday with the flu. I’m going to Chicago with my kids. I’m taking Friday off with a cough to get to the campground early. I’ll be sick the day before spring break to leave for Florida on Friday.

Obviously, there are legitimate reasons for sick leave and personal days. No one will begrudge a parent for taking care of their sick child. However, when teachers already have summer, winter, and spring breaks worked into their yearly calendar, it’s concerning that such flagrant absenteeism on the public dollar is so common.

While arbitrary, 10 missed days is the current research standard by which schools are measured and the number that garners a teacher the status of “chronically absent.” Numbers vary from study to study, but roughly 28 percent of traditional public school teachers miss more than 10 days of school a year. That’s a substantial number compared to three and a half sick days for the average worker. Looked at another way, about 5.3 percentof teachers are absent from school on any given day.

Various studies into Australian schools show that teachers anywhere succumb to the same incentives and social pressures as their American counterparts.

Chronic absence is a ubiquitous problem. While the data here focus on the United States, as it is the country where I work and thus the data to which I have the easiest access, reporting shows it to be a problem of varying degrees elsewhere around the world.

A review from the World Bank showed that the problem is far worse in developing countries, reporting by the BBC exposed the growing issue in the United Kingdom, and various studies into Australian schools show that teachers anywhere succumb to the same incentives and social pressures as their American counterparts; it’s a global issue that affects every country to varying degrees.

That teacher absences affect student learning is obvious. In an ideal scenario, a substitute teacher steps in and provides the same instruction as any other teacher, but any student can tell you that this scenario is a naive fantasy. Instead, substitutes are given movies to watch or, when given genuine materials to teach, receive near insurmountable pushback from the students.

I’ve watched substitute teachers struggle. Those left with plans mumble their way through a teacher’s chicken scratch while students consider it a challenge to get away with as much as they can. Upon a teacher’s return, the students require a day of review, some sort of classwide consequence for their treatment of the substitute, and a review of behavior expectations; altogether, an absence can result in more than one day of lost learning.

Accordingly, a common finding across papers regarding teacher absenteeism is that when teachers reach 10 absences in a year, the effect on student learning is comparable to the difference between a first-year and fourth-year teacher. Due to stress or apathy, each day brought with it many missing teachers. Because of the school’s reputation, substitutes overlooked the vacancies.

Regarding the actual content of learning, there is a one-to-one ratio between absences and learning losses, meaning a 10-day absence results in 10 days of missed content. Considering the affected behavioral norms and post-sub clean up work, I would wager the ratio is higher.But there is a secondary consequence that affects even those without children in public schools. To them, this is wasted money. With both a teacher and substitute getting a check, estimates into the cost of absenteeism estimate it to be $4 billion annually. The National Council on Teacher Quality calculates the number to be as high as an annual cost of $1,800 for every teacher employed.

Studies cannot quite grasp one last effect of chronic absenteeism. I taught in a failing, high-poverty school. Hallway fights were a regular occurrence, and vulgarities were more common than completed work. Due to stress or apathy, each day brought with it many missing teachers. Because of the school’s reputation, substitutes overlooked the vacancies. As such, teachers, hall monitors, or even administrators were called upon to fill the gap, creating an even larger stress load for those who did show up. Thus, as more teachers skipped out, more teachers developed stress and in turn skipped out, creating an ever-worsening cycle.

Teachers report illnesses and burnout as leading factors in their absences. To the former, I grant that illness and unfortunate circumstances often justify high levels of absences. A teacher in my district suffered a stroke one year and, unbeknownst to him when he signed his contract, would continue to suffer from complications that left him at home for days on end the following year. He was a chronically absent teacher at no fault of his own.

However, a preponderance of evidence suggests that many absences are from reasons other than illness. Absence rates are slightly higher on Monday and distinctly higher on Friday. Teachers with previously high rates of attendance who move to schools with a culture of absenteeism show an increase in missed days. Studies into the effect of a school’s poverty level and teacher attendance are inconclusive—some show a correlation and others do not.

One would assume the average of absences to be common across the country if illness truly were the culprit, and yet, in Utah, the absenteeism rate is only 16 percent compared to a high of 75 percent in Hawaii. Many teachers stay home ill, but there are others out there looking for an extended weekend.I can relate to the stress justification. When students dump their home problems—either through constructive conversation or destructive behavior—it wears on a person’s psyche. However, studies into the effect of a school’s poverty level and teacher attendance are inconclusive—someshow a correlation, and others do not. Stress plays a part, yes, but school cultures and policies have a far larger effect on absence rates than a school’s poverty level.

Counterintuitively, few local school policies seem to have much of an effect on teacher absenteeism. In response to the growing problem, districts have considered various incentives for excellent attendance: increased retirement benefits, payback for unused sick leave, better scores on teacher evaluations, and a host of other policies. While there is some improvement—perhaps a day more of attendance—the effects are negligible compared to two other factors: charter status and union protections.

According to the Fordham Institute, in 34 out of the 35 states with sizable charter school initiatives, teachers in traditional public schools are more likely to be absent than their charter school counterparts. In those states, roughly 10 percent of charter school teachers are chronically absent, falling above that 10-day benchmark, compared to 28 percent of public school teachers. In eight states and the District of Columbia, they are up to four times as likely to be chronically absent. 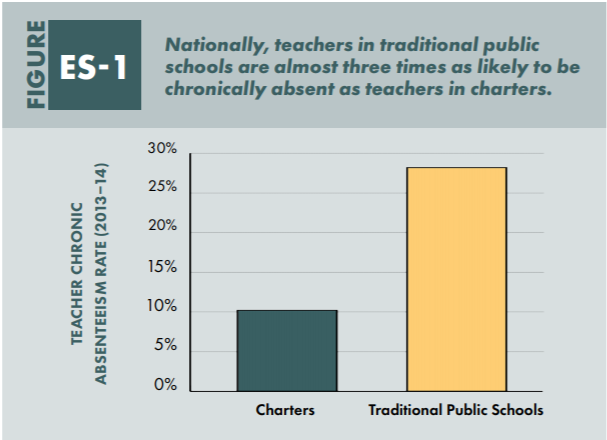 Various union policies increase the risk of absenteeism. The more sick leaveteachers are given, the more sick days they take. In states where collective bargaining is illegal, the disparity in absenteeism rates is smaller between traditional public and charter schools. Where charter school teachers unionize, they become twice as likely to be chronically absent. Teachers with tenure have higher rates of absenteeism than those without it.

Even the process of submitting a request for an absence lacks the accountability of direct interaction.Both charter status and unionization have the same effect on teachers: a lack of accountability. In public schools, there is no consequence for skipping a day. In charter schools or non-unionized districts, more competitive environments, the pressure for educational results holds teachers accountable for their students and thus excellent attendance.

As one small example, even the process of submitting a request for an absence lacks the accountability of direct interaction. With modern systems, submitting an absence requires inputting the request into an online program and waiting for an administrator to click “accept.” They require no specified reason or direct contact with administrators.

Various methods for teacher accountability, like standardized testing and administrative reviews, have had mixed results. They have potential, but because unions protect jobs, those methods are slandered and given no clout in the world of education. Teachers remain unaffected no matter the results.

Conversely, various market-based initiatives have proven beneficial in improving other realms of education and could improve attendance issues, as well. Even the preliminary studies referenced above show that de-unionized charter schools have more teachers present every day. Without the protection of collective contracts and tenure, teachers’ jobs depend on their effectiveness with students.

I’ll end with an example from the Fordham Institute’s study:

Imagine what Chicago’s traditional public school system could do for students if its teacher chronic absenteeism rate were 5 percent (like the city’s charter schools) rather than 31 percent.

As America wrestles with ever-worsening public schools, here is one small initiative that could have a disproportionately positive impact for each student struggling through them.

Daniel Buck is an educator in an urban school in Wisconsin with a master’s degree in Curriculum and Instruction from the University of Wisconsin – Madison and an editor for the website Lone Conservative.