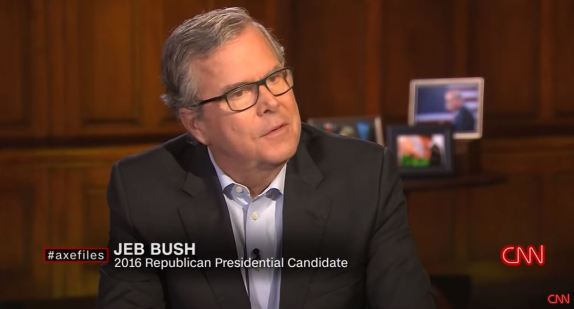 Jeb Bush is to Republican politics what the little mechanical moles are to the arcade game Whack-A-Mole; an annoyance that bursts forth according to some malevolent algorithm and the faster you beat it down the quicker it pops back up.

With the Florida legislature about to pass a bill prohibiting Florida local governments from implementing so-called sanctuary policies, Jeb! has surfaced to opine that sanctuary cities in Florida were “not a problem.” (Despite Jeb Bush’s opposition the bill passed yesterday and Florida now has a tough anti-sanctuary city law.)

This is one of those new political issues where it’s designed to make a point rather than to solve a problem. I’m not sure we have this problem. But it could be in the last few years something has changed.

As our friend John Binder of Breitbart documented, this is what the Democrats have been saying before and during the current debate in the legislature, and it’s not true.

As Binder pointed out, the left-leaning fact-checking site PolitiFact debunked Tallahassee Mayor Andrew Gillum’s claim that there were no sanctuary cities in the state, writing, “Whether Florida has sanctuary cities is not as settled as Gillum claimed.”

Currently, Alachua County, Florida, refuses to turn illegal aliens over to the Immigration and Customs Enforcement (ICE), even after a national is accused of a crime. Likewise, West Palm Beach, Florida, bans local officials from aiding ICE with investigations into criminal illegal aliens, and there may be others.

The anti-sanctuary cities legislation is a major priority of Republican Gov. Ron DeSantis and our old friend Sen. Joe Gruters, who are close allies of President Trump. They see it as an important step to curbing illegal immigration in Florida by making local governments comport with the rule of law.

As Samantha J. Gross explained in an article for Bradenton.com, under the proposal, local law enforcement would be required to honor federal law enforcement’s request for an “immigration detainer,” meaning a request that another law enforcement agency detains a person based on probable cause to believe that the person is a “removable alien” under federal immigration law. The bill would essentially make the “request” a requirement.

The latest version of the bill (SB 168) includes a rule that local government employees or elected officials who permit sanctuary-city policies may be suspended or removed from office. It also includes fines of up to $5,000 for each day that a sanctuary-city policy is in place, an “anonymous complaint’ web portal through the office of attorney general for any person to submit an alleged violation of the policy and the threat of removal of state grant funding for entities that practice sanctuary policies.

“It is an essential duty of government to make sure criminal illegal immigrants are held accountable and deported,” said Rep. Randy Fine, R-Melbourne Beach, according to reporting by Tori Schneider of the Tallahassee Democrat. “This bill will make our state safer, reduce crime and save money.”

So, how could former Governor Jeb Bush, once the most respected elected official in Florida, get things so wrong about sanctuary cites and the rule of law?

As Mr. Binder noted in his article for Breitbart, the Bush family has long campaigned for and supported a globalist illegal and legal immigration policy for the U.S. Aside from supporting amnesty, both Jeb Bush and his brother, former President George W. Bush, oppose cutting legal immigration levels to boost Americans’ wages and reduce foreign competition against working-class Americans.

With the Florida legislature on the cusp of enacting one of the nation’s strictest laws against “sanctuary cities” Speaker of the Florida House of Representatives José Oliva said he is confident that a bill will get to the governor’s desk by the close of session, which is supposed to end today (May 3, 2019). (Despite Jeb Bush’s opposition the bill passed yesterday and Florida now has a tough anti-sanctuary city law).