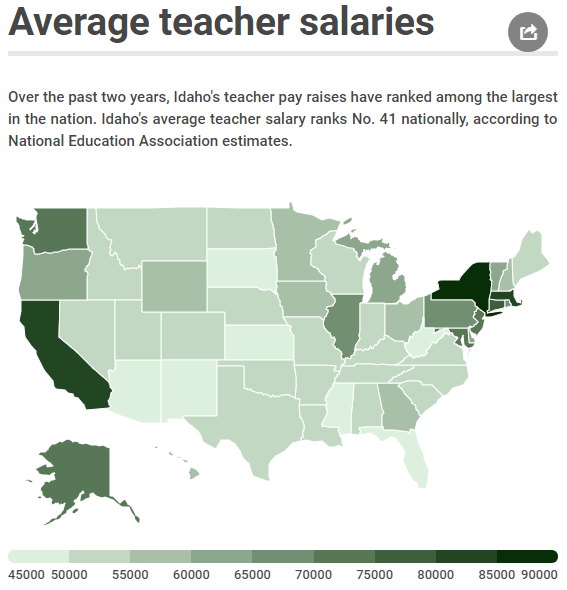 After two years of relatively robust raises, Idaho’s teacher pay raises has moved up in national rankings, according to new estimates from a national teacher’s union.

However, Idaho’s average salary remains more than $10,000 below the national average. And, when adjusted for inflation, Idaho’s salaries have lost ground over the past decade.

The National Education Association’s annual Rankings of the States report updates some familiar numbers. For example, Idaho’s per-pupil student spending remains dead last in the nation — $6,861, or 47 percent below the national average.

But as Idaho continues to boost teacher pay — in hopes of recruiting and retaining educators — the NEA’s newly released report delivers a mixed verdict.

Teacher pay remains a hot issue nationally, triggering strikes in several states and cities. The NEA notes that the average teacher salary, adjusted for inflation, has dropped by 4.5 percent over the past decade. In Idaho, that decrease is 6.4 percent.

And teacher pay remains a hot topic at the Idaho Statehouse. This year, legislators approved Gov. Brad Little’s plan to raise Idaho’s minimum teacher salary from $35,800 to $40,000 over the next two years. They also put more than $7 million into premiums for high-performing veteran teachers. But many educators still say the state has not gone far enough to reward experienced teachers, since most of the career ladder money went to teachers in their first few years in the classroom.

“While it is good to see Idaho continue to make progress on adequately compensating our teachers, we still have a lot of work to do to ensure we can retain our most capable educators, particularly our state’s veteran teachers,” Little said Tuesday. “They are the critical component for improving our students’ achievement.”

State superintendent Sherri Ybarra agreed that there is still work to do, but she believes Idaho will continue to make progress.

“It is wonderful to see Idaho’s commitment to teachers – increasing their pay and making it easier for schools and districts to recruit and keep great teachers – recognized, so these latest statistics are welcome and encouraging,” she said Tuesday.

As Idaho’s average teacher salary passes the $50,000 plateau, the pressure builds for districts and charters. The state will allocate no more than $50,000 for a teacher’s salary, which means local officials have to find ways to make up the difference. Often, that means using supplemental property tax levies to backfill the budget — and try to keep veteran teachers on staff.

“We are recruiting educators,” Idaho Education Association President Kari Overall said Tuesday, “(but) districts are struggling to retain educators beyond that five-year mark.”

Overall was struck by another finding from her parent organization’s report: Idaho’s dismal per-pupil student ranking.

“It’s really all part of the equation,” she said. “It’s a broad conversation we need to be having as a state.”