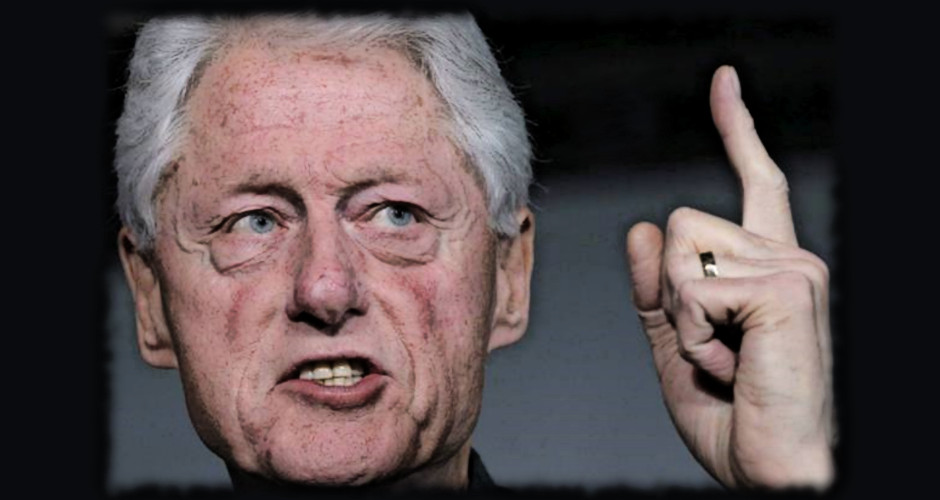 A perceptive friend of mine is known to occasionally say someone is worrying about the wrong thing.  Amazingly, he is usually right, and what you saw originally might have been a ruse.  A ruse is likened to a magician’s art.  Ruse: an action intended to deceive someone; a trick.

DECEPTION:  Many Americans believe Bill Clinton’s Monica Lewinsky affair provided the press and AG Janet Reno the opportunity to gin up attention so well; it diverted attention from the treasonous ‘big picture’ in which Bill Clinton was embroiled. i.e.  Selling America’s top-secret information to the Chinese for millions of dollars.  Year of the Rat is a book chronicling all the details exposing this most treasonous act against America, probably in US history.   “Chinagate: Beijing Bailout” and  “Chinagate: Red Star Over the White House” were parts of a special report based on that book and further investigation.  Also, see:  ‘Lest We Forget Chinagate, the Most Serious Scandal in US History’ and ‘Key Player in Clinton Betrayal of U.S. Tells All in Secret Video’ (very recent)

Judicial Watch and Judicial Watch alone uncovered the entire Chinagate scandal in 1995, starting with a Freedom of information Act request to the Commerce Department.  Chinagate involves the transfer of America’s most sensitive technology, including but not limited to nuclear missile and satellite technology, in exchange for millions of dollars in contributions to the 1996 Clinton-Gore re-election effort and the Democratic National Committee.

President Clinton’s compromise of U.S. security for Chinese cash was a far graver issue in the impeachment arena than the sex and lying of the Lewinsky scandal, which drew all the attention of the media.

From the report in 1999, ‘Chinagate: Red Star Over the White House,’  it is significant that Special Prosecutor Ken Starr — who, it must be remembered, was an executive branch official subject to dismissal by the President — was able to get, then Attorney General, Janet Reno’s approval to pursue the Lewinsky matter.  Reno’s cooperation in this instance contrasts sharply with her resolute determination to foreclose any avenue of investigation that would tie Chinagate scandals to either Bill Clinton or Al Gore.

Quoting that report, “Lost amid the superficial tumult that characterizes the “politics of personal destruction” is the fact that the impeachment of Mr. Clinton on Lewinsky-related charges deferred a much-needed inquiry into the graver charges that are pending against Bill Clinton — specifically, treason and bribery, which are specifically cited in the Constitution as grounds for impeachment.  Evidence abounds that Mr. Clinton, in acts of official perfidy that may be unparalleled in our nation’s history, accepted bribes from Red China in the form of illegal political contributions, and in exchange made policy decisions that undermined our national security to the benefit of that hostile foreign power.  The mantra chanted by the President’s lackeys and partisans is that Bill Clinton’s acts in the Lewinsky matter “don’t rise to the level” of impeachment or removal from office. Not even the most chauvinistic of Bill Clinton’s defenders could recite that slogan regarding treason.”

Clinton was disbarred and fined after Impeachment for lying under oath to a grand jury and obstructing justice regarding his affair with White House intern Monica Lewinsky, although he was not removed from office.

It is interesting that Lewinsky’s blue dress was kept in the condition it was and then exposed so as if to say ‘look here.’  One of the greatest attention getters of all time might was made available for Bill Clinton’s benefit!   Attention commanding ‘salaciousness’ was front and center.  A needed, perfect ruse, if you will, when you consider his alternative other ‘monumental’ scandal: the many documented treasonous acts against America in the Chinagate scandal.

I think so.  States Tyler Durden in his Zero Hedge article ‘The Evidence That Russia Hacked The DNC Is Collapsing,’  “As I’ve been saying for months, there is no evidence that the Russians hacked the DNC: none, zilch, nada. Yet this false narrative is the entire basis of a campaign launched by the Democrats, hailed by the Trump-hating media, and fully endorsed by the FBI and the CIA, the purpose of which is to “prove” that Trump is “Putin’s puppet,” as Hillary Clinton put it.  Now the investigative powers of the federal government are being deployed to confirm that the Trump campaign “colluded” with the Kremlin in an act the evidence for which is collapsing.

“This whole affair is a vicious fraud. If there is any justice in this world – and there may not be – the perpetrators should be charged, tried, and jailed.”

In the first place why would the Russians want to spy on the DNC after Obama and the Clintons so generously took care of Putin.  See:  Putin Would Prefer Hillary  Let us suppose that Vladimir Putin did successfully ‘hack’ election computers in our Presidential election.  So now the question really comes down to who he would have preferred dealing with as our next president. Would he have preferred a guy he doesn’t know, whose successful business career has been built on accountability and credible relationships?  Or, would he prefer the wheeling dealing ethics-deficient treasonous Clintons he knows he can buy off like he did with their obtaining 20% of our national Uranium supplies through a company in Canada while Hillary was Secretary of State? The Clintons reportedly raked in $130 million on the deal. It appears political relationships can be surprisingly rewarding and create downright landslide opportunities with no investigations.

Keep in mind that not only were former CIA Director John Brannon, NIA Director James Clapper, NSA Director Michael Rogers and current FBI Director James Comey all appointed by Obama with Comey still serving as Director of the FBI, but Comey also has serious connections to the Clinton Foundation.  Interesting.  They steadfastly support the allegation about Russian involvement in our election process while not actually probing the information directly.  They are relying on other sources for their information. Cozy.  Therefore, they cannot be accused of direct wrongdoing. 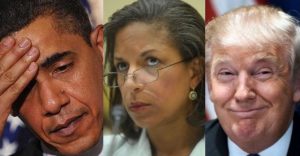 In an Investor’s Business Daily editorial, ‘Did Obama Spy On Trump? Sure Looks That Way,’ “Rep. Devin Nunes, chairman of the House Intelligence Committee, says that the Obama administration surveilled Donald Trump’s transition aides and possibly Trump himself following November’s election. If true, it warrants a major investigation.

“’I recently confirmed that on numerous occasions the intelligence community … collected information about U.S. citizens involved in the Trump transition,’ Nunes told reporters.

“Nunes immediately came under intense criticism from congressional Democrats for his revelations. What’s both hilarious and sad is that these are the very same Democrats who have been nearly silent, as a series of illegal leaks from the intelligence bureaucracy have made their way into the mainstream media, in a transparent attempt by unnamed intelligence officials to damage Trump’s presidency.

“Nunes, speaking Wednesday and citing only “sources,” was careful to note that the surveillance of Trump aides appeared to be both legal and “incidental” — that is, not part of a directed spying operation on Trump.

“Of course, that appears to be literally true.  But it’s also irrelevant.  Democrats and the media keep mentioning the word “incidental” as if it exonerates what now appears to be a domestic spying operation against Trump directed from the Obama White House.

“’Incidental’ doesn’t mean unintentional. Take as an example the leaks of former Trump National Security Advisor Michael Flynn’s conversations in late December with Russian Ambassador Sergey Kislyak. Those talks have been treated as sinister, with the Washington Post even suggesting that they were a violation of the Logan Act, a possible serious crime.

“But U.S. intelligence gatherers could quite easily get an “incidental” trove of material on Flynn, simply by getting a surveillance warrant on someone they knew he was likely to talk to. Presto! The information on Flynn talking to the target becomes “incidental,” rather than targeted. Still, the intent was clear.

“The fact is, as Nunes revealed, this appears to be a pattern of surveillance put in place by the Obama administration and possibly officials in the FBI, CIA or National Security Agency to elude any appearance of a domestic spying operation on a political foe, which would be a serious crime.”  – Unquote, ‘ Investor’s Business Dailey’

Former National Security Advisor Susan Rice:  “I know nothing about this.”Reports the Washington Examiner, “First, Susan Rice denied any knowledge of unmasking the identities of Trump officials named in intelligence reports linked to the president’s transition team. Then, the former National Security Advisor admitted that unmasking occurred, while insisting it wasn’t for political purposes.”

She told NBC’s Andrea Mitchell, “The allegation is that somehow the Obama Administration officials utilized intelligence for political purposes. That’s absolutely false.” It is instructive to note that Rice had extremely close ties with Obama.  In addition to serving as his national security advisor during his second term, Rice was known as his “right-hand woman,” and “like a sister.”  Does this remind you of her five TV network interviews when she swore a video caused the Benghazi catastrophe?

This truly does all sound like the craft of the tag team Obama and Soros, two of the sorriest human beings of whom I am aware.  If you think that is a bit strong, I give you the links below to check out how really sorry and corrupt they truly are when you have a lot of time.

God save the Republic.

ORGANIZATIONS FUNDED BY GEORGE SOROS AND HIS OPEN SOCIETY FOUNDATIONS

GEORGE SOROS IS IMPLEMENTING A “ONE WORLD” SOCIALIST GOVERNMENT