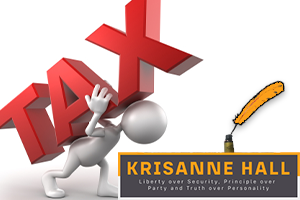 During the American “Civil War,” politicians figured out a whole new source of revenue…the individual American income.  If they could pull it off, it would invariably be the most consistent revenue stream the American government had ever experienced.  All that was needed was to convince the people that this “inconvenience” was not only necessary, but limited and temporary to meet an immediate need.  Enacted in 1862, this income tax was collected with the consent of the people to fund the War, was limited by income, assessed upon those who made $600 or more a year, and would expire after a set period.

But as we have learned, a power once assumed by government is never temporary and will always increase exponentially.  In 1894 Senator John Sherman, a Republican from Ohio, argued that this “temporary” tax should be made permanent.  He argued that the mechanism of consumption taxes were not “fair” and that the burden of the debt should not rest equally upon the poor, but upon those who can afford the burden.

“A few years of further experience will convince the body of our people that a system of national taxes which rests the whole burden of taxation on consumption, and not one cent on property or income, is intrinsically unjust. . . . [T]he consumption of the rich does not bear the same relation to the consumption of the poor as the income of the one does to the wages of the other.”

The Civil War Tax would expire in 1870 as planned, but subsequent economic challenges would resurrect the drive to create a permanent income tax solution.  The People’s Party would bring the discussion back into the public arena, but it would be the Republican Party, through Presidents Roosevelt and Taft and several key Congressmen who would give this unconstitutional measure its life, with bipartisan support by the Democrat party.

In 1906 President Theodore Roosevelt stated that a “graduated income tax of the proper type would be a desirable feature of federal taxation, and it is to be hoped that one may be devised which the supreme court will declare constitutional.”  Roosevelt’s successor, William Howard Taft, also appeared to accept the constitutionality and desirability, at least in emergencies, of an income tax. In accepting the Republican nomination in 1908, Taft said, “I believe that an income tax, when the protective system of customs and the internal revenue tax shall not furnish enough for governmental needs, can and should be devised which, under the decisions of the Supreme Court, will conform to the Constitution.”

Furthermore, many Republicans had come to Congress willing to join with Democrats and any remaining Populists to push for an income tax.  Even the Republicans were trashing the consumption tax as “unfair” and pushing for a more “balanced” approach to taxation that put the burden of taxation on those who could “afford it.”

“[A]n income tax, levied upon those who ought to bear the burdens of government . . . will meet even that principle more perfectly than to levy duties upon things that the people must use, and impose the weight of government only by the rule of consumption.”

The question remained, would there be a tax by legislation or a tax by Constitutional Amendment?   In a full on bipartisan push for income tax, Senators Joseph W. Bailey of Texas, a Democrat, and Albert B. Cummins of Iowa, a Republican, both introduced legislation to add an income tax provision, modeled on the 1894 statute, to a tariff bill.  The Supreme Court would be an insurmountable obstacle to this measure as this court had repeatedly deemed direct income tax by legislation to be unconstitutional.

President Taft weighed in with support for a constitutional amendment, stressing, among other things, the desirability of “stability of judicial construction of the Constitution.  Instrumental in the push for a Constitutional Amendment was Republican Senator Norris Brown of Nebraska. Senator Brown would bring in greater support for the Amendment by proposing the following Amendment language: “The Congress shall have power to lay and collect taxes on incomes and inheritances.”  Although many did not like the proposal it gave a starting point for real discussion.  The final push for support would come on June 16 when President Taft gave support to a constitutional amendment. The next day, June 17, with the president now on the side of a constitutional amendment, Senator Brown tried again, proposing the following language: “The Congress shall have power to lay and collect direct taxes on incomes without apportionment among the several States according to population.”  The joint resolution containing the Amendment passed unanimously in the Senate (77- 0), and in the House a week later, after about four hours’ debate, by a vote of 318 to 14.

Let us be reminded that the initial arguments of war time necessity and temporary implementation are completely out the door.  These politicians, both Republican and Democrat, had now devised a way to direct tax the people, contrary to Article 1 section 2 clause 3 of the Constitution.  They have nullified the Constitution and ignored the Supreme Court opinions declaring such acts as unconstitutional.  With no “emergency” need and no way of ending this intrusion, the only the justification behind the actions of these legislators that remains is the desire to permanently enrich the government in a way that our founders concluded to be complete despotism.

Perhaps Thomas Paine tapped into a axiomatic truth when he wrote in his Answer to Mr. Burke’s Attack on the French Revolution: ,

Preview our course on Direct Taxation in America at Liberty First University: http://bit.ly/LFUPreview

Read Part 2 of Direct Taxation and learn the intent of the founders regarding taxation within the Constitution: http://bit.ly/AmHxTax2