WA’s leg. morons passed I-1000 ‘Affirmative Action.’ Foolish Gov. Inslee WILL SIGN IT and he wants to be our President? God Help Us! 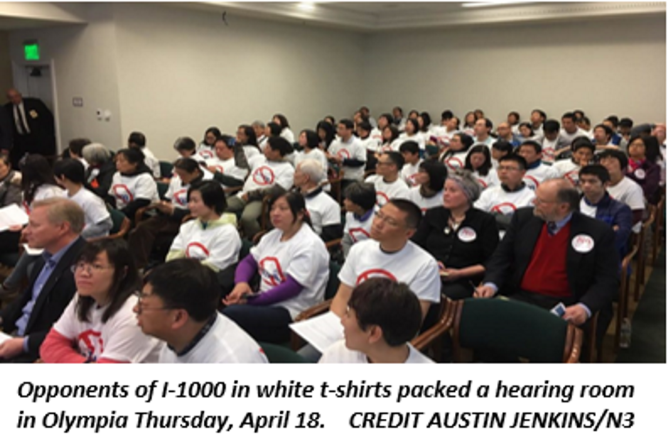 WA’s leg. morons passed I-1000 ‘Affirmative Action.’ Foolish Gov. Inslee WILL SIGN IT and he wants to be our President?  God Help Us!

Both houses of the Washington State Legislature just passed the controversial Affirmative Action bill known as Initiative 1000.  It will be the ruination of real civil rights in Washington State.

It appears that the progressive crazies of the Democrat Party have gone literally over the edge in Olympia, Washington.  In spite of large opposition and public outcry the extreme left is on a tear to harm our freedoms reportedly with lies and propaganda.

Affirmative action for literally everybody but white males is racism!  These purportedly caring and coddling fools of the left are absolute morons, deluded or nefarious people of rabid designs for what’s left of our republic.  They apparently don’t even pretend to have read our Constitution.

In an opinion piece in the HearldNet at heraldnet.com a writer named Lucy Liu quite succinctly makes the case for how insane this legislation really is:  “On Nov. 7, I was stopped by a signature collector for Initiative 1000. She didn’t explain what I-1000 was, but just told me it’s about “equal pay for women.” I smelled something fishy, so I walked away.

“After I did some research, I realized that, in the name of pursuing equal opportunity, I-1000 seeks to repeal initiative I-200, the legislation that truly pursues fair treatment and equal opportunity for every person in our diverse society and outlaws special preferences based on race and gender in college admission, public employment and contracting. The people pushing I-1000 are so dishonest! They flip the words to hide their true agenda: to use race, gender, ethnicity to divide our society and pit people of different races, colors and genders against each other.

“’Life should be better and richer and fuller for everyone, with opportunity for each according to ability or achievement regardless of social class or circumstances of birth,’ said American writer and historian James Truslow Adams who coined the term ‘American dream’ in 1931. Eighty-seven years later, the people behind I-1000 are attempting to take this American dream away from us. Shouldn’t we say no?”

Furthermore, Steven Neill, a writer for this publication stated recently:  “How does promoting racism, sexism, etc. help to fight racism? Well, according to the backers of WA Initiative I-1000 Part II, 11(d), ‘it’s when you use race, sex, color, ethnicity, national origin, age, sexual orientation, the presence of any sensory, mental, or physical disability, and honorably discharged veteran or military status as the sole qualifying factor to select a lesser qualified candidate over a more qualified candidate for a public education, public employment, or public contracting opportunity.’ Sole? How does someone’s skin color or other ‘status’  make them a better candidate for a position? It doesn’t. Yet to the sponsors of I-1000 it should.

“The initiative itself is bigoted in that it postulates without the preferential treatment of this initiative, minorities could not get the job. How insulting is it that to the applicant and those they work with that they must wonder if the applicant was awarded the position based on merit, or based on minority status? One also has to ponder the results of an applicant being awarded a position when minority status has been factored in. How great of an advantage do the minority statuses grant the minority? Would they even qualify for the position at all without being a minority? I-1000 does not give specific examples of how big of an advantage this unmerited status grants, for instance what if an applicant is a gay, black, woman; does she get three bonus points for the position? What happens when one finalist is a black female and another a gay Latino? Can the loser not rightfully claim discrimination when minority status is considered?”  The title of Steve’s article says it well ‘I-1000: Reviving Bigotry in WA State.’

Again, it will probably be the death of civil rights in Washington State.

More importantly liberty is dying in Washington State as a result of the nimrods in power running things just like California and soon to be Venezuela if left unchecked.

There has never been a stronger need for Liberty, WA to become our 51st State.