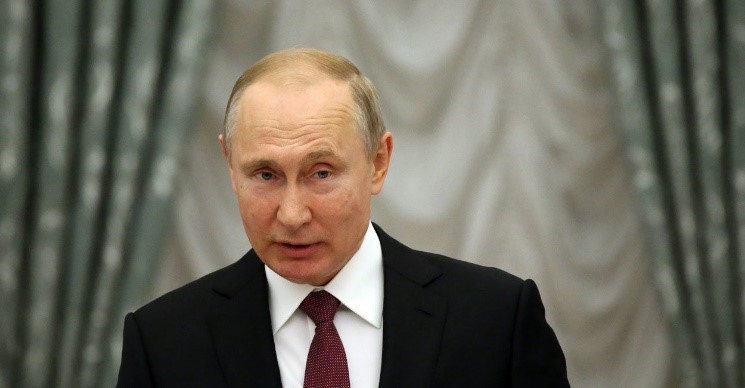 KYIV, Ukraine—Less than a week after he won Ukraine’s presidential election, 41-year-old comedian Volodymyr Zelensky proved he has the chops to stand up to Russian President Vladimir Putin on the world stage.

Putin signed a decree on April 24 that expedited Russian passport applications for Ukrainians living in the two war-torn, Russian-sponsored breakaway territories in eastern Ukraine. Then, on April 27, Putin upped the ante, floating the possible extension of the passport offer to all Ukrainians.

With the ball in his court, Zelensky—a TV star with no political experience—responded to the Russian president with a zinger. 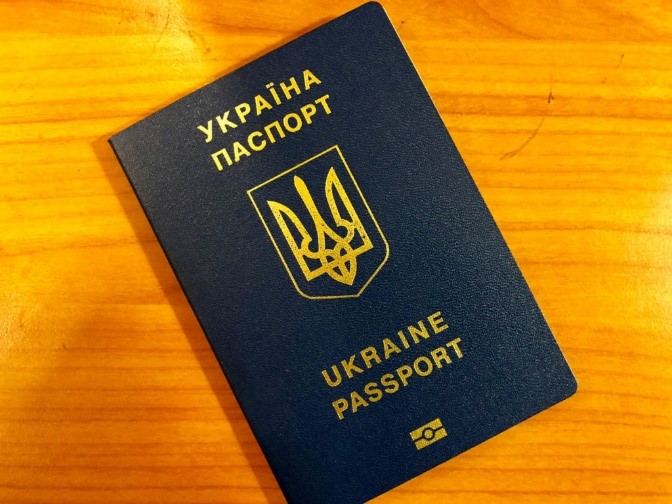 Volodymyr Zelensky, Ukraine’s president-elect, has offered Ukrainian passports to “all who are ready to fight for freedom.” (Photos: Nolan Peterson/The Daily Signal)

Then, Zelensky turned the table on Putin, offering “protection, asylum, and Ukrainian citizenship to all who are ready to fight for freedom.”

“We will provide asylum and assistance to anyone—anyone who is ready to fight alongside us for our and your freedom,” Zelensky wrote.

Zelensky’s landslide electoral victory over incumbent President Petro Poroshenko on April 21 marked a sea change in Ukraine’s post-Soviet political order, showing that voters were willing to take a chance with a president outside Ukraine’s political mainstream.

Putin, on the other hand, is a former KGB officer and seasoned head of state—who first assumed Russia’s highest office in 2000—with experience presiding over conflicts in Chechnya, Georgia, Ukraine, and Syria. 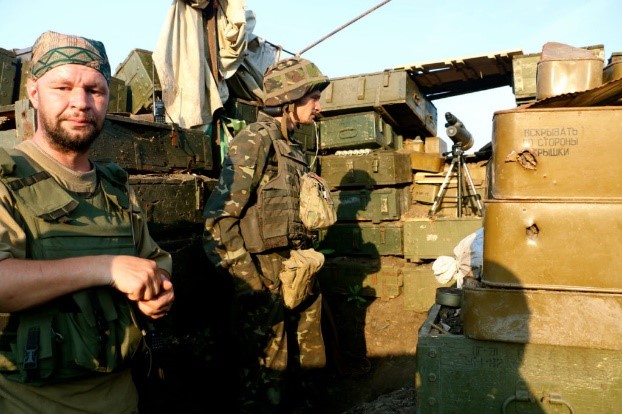 The war in Ukraine is fought from trenches—similar to conditions in World War I, albeit on a much smaller scale.

Consequently, there have been concerns in Kyiv, as well as among Ukraine’s Western partners, about how Zelensky, an untested political greenhorn, would fare against the Russian president.

Yet, Zelensky’s response to Putin’s passport gambit is a good sign, some experts say, highlighting his ability to prosecute hard-nosed, and high-stakes diplomacy once he takes office on May 28.

“This kind of talk, in response to Putin, is refreshing,” said Paul Niland, a Kyiv-based political commentator and businessman who has spearheaded an effort to treat Ukrainian soldiers for post-traumatic stress disorder.

“In Zelensky, [Putin] faces something new,” Niland said. “Someone who, apparently, is ready to take the fight to him and call out the systemic problems with Russia and tell the Russian people, in their own language, how badly they really fare under [Putin].”

Many Ukrainian officials and experts anticipate that Putin will continue to test the new Ukrainian president’s resolve. And, some say, there’s already bad blood brewing between the two leaders.

“It is clear that Putin only feels contempt for the actor and humorist,” said Marcel Van Herpen, director of the Cicero Foundation, a Dutch think tank that specializes in Russian and European affairs.

“But let us not forget that Ronald Reagan was an actor, too, and the way in which he handled the Kremlin—he did a wonderful job,” Van Herpen added.

By July 2014, just three months into the conflict, a ragtag coalition of Ukraine’s regular and irregular forces had retaken 23 out of the 36 districts previously under combined Russian-separatist control.

With its hybrid warfare strategy faltering, Russia invaded with thousands of its own troops. After more than five years of constant, conventional combat, the war is ongoing and has killed more than 13,000 Ukrainians.

Moderated by a February 2015 cease-fire known as Minsk II, the war in the Donbas is now a static, trench war, similar in many ways to the Western front in World War I—albeit on a much smaller scale, and with some modern trappings like the employment of drones and electronic warfare systems. 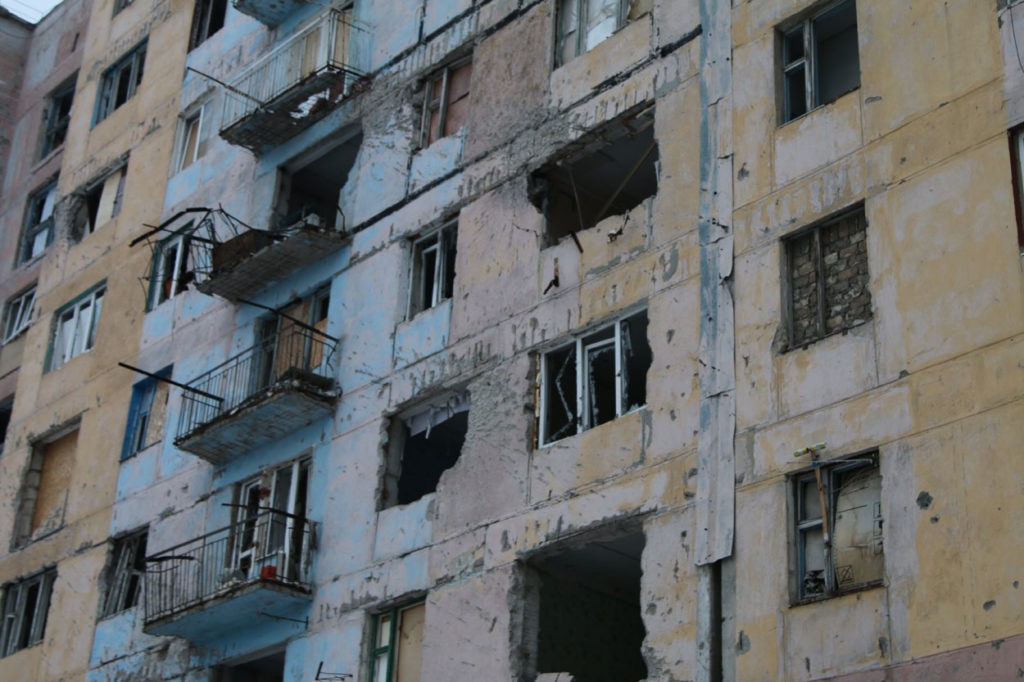 Ukrainian soldiers hunker down in a basement during an artillery attack in 2015.

In the Donbas warzone, approximately 60,000 Ukrainian troops remain deployed along a roughly 250-mile-long front line. Opposite the Ukrainians inside Russia’s two breakaway territories, there are currently about 3,000 Russian soldiers embedded within a larger force of about 34,000 pro-Russian separatists, and foreign mercenaries.

It’s a bizarre conflict, in which neither side is fighting to achieve a breakthrough. Rather, both sides simply hold their lines, while weathering daily shelling and sniper fire, for the sake of not backing down first.

The land war in the Donbas is relatively quarantined from the rest of Ukraine by the Minsk II cease-fire. The physical effects of combat extend only as far as the range of the weapons used. However, Russian cyberattacks, propaganda, sabotage, and targeted assassinations affect the entire country.

Beyond the Donbas warzone, Ukraine has fortified its southern seaboard against the threat of a Russian amphibious invasion. Russia has about 77,000 troops deployed along its border with Ukraine capable of launching a rapid, armored invasion, and there are also about 40,000 Russian troops currently garrisoned in Crimea, according to Ukrainian military reports.

To defend against the Russian threat, Ukraine has rebuilt its army into Europe’s second largest in terms of manpower. Ukraine’s armed forces now comprise about 250,000 active-duty troops—up from roughly 6,000 combat-ready soldiers when the war began in 2014.

On the Continent, only Russia has a larger military than Ukraine’s.

Thus, with Europe’s two largest standing land armies exchanging daily fire in the Donbas, there’s always the chance of an unanticipated event—a so-called Franz Ferdinand scenario—setting off an escalatory domino chain that leads to a much bigger, and far deadlier, cataclysm.

According to many Ukrainian officials and policy experts, Putin’s passport offer provides the Kremlin a legal alibi to protect Russian citizens in Ukraine with military force.

“Ukraine and the West should be extremely vigilant” about Putin’s passport offers to Ukrainians, the Cicero Foundation’s Van Herpen said.

“The passport offensive is a sign of a more aggressive stance, indicating that the Kremlin is not only leaving the Minsk process—in which it never believed—but is eventually preparing for a bigger offensive,” Van Herpen said.

Similarly, many of Ukraine’s front-line soldiers anticipate a Russian escalation of the ongoing war.

“All my brothers in arms are ready for a big war. It’s a pity, but we’re certain that, sometime soon, we will have big problems on the battlefield,” Dmitry Dovzhenko, a sergeant in the Ukrainian army who is currently deployed to the Donbas frontline, wrote The Daily Signal in an email.

Russia made a similar passport offer prior to its invasion of Georgia in 2008. Beginning in 2002, the Kremlin distributed Russian passports to Georgian citizens in the breakaway regions of South Ossetia and Abkhazia. Russian forces subsequently invaded when Georgia tried to bring those territories back under its control in 2008.

According to some military experts, the time is right for Putin to escalate the conflict in Ukraine. For one, the season is agreeable.

In early spring, snowmelt turns Ukraine’s roads and fields into muddy morasses unfavorable for armored, mechanized advances. Yet, as summer nears, the ground dries and hardens, making the region more accommodating to a rapid, conventional offensive.

Secondly, Putin’s popularity in Russia is lagging due to a moribund economy.

Russia’s 2014 annexation of Crimea was a boon for Putin’s domestic favorability numbers, which climbed from around 60% to roughly 90% after the invasion. For that reason, some experts say that Putin is in the market for another geopolitical victory—especially while Ukraine has an untested president-elect on deck.

“Putin’s popularity is at a historic low; he needs a foreign policy success and cannot wait too long,” Van Herpen said.

Putin has said that he’s open to one-on-one peace talks with Zelensky. The Ukrainian president-elect, who is open to such a meeting, has made his negotiating positions clear—he says that the Donbas and Crimea are territories “temporarily” occupied by Russia, and he expects to bring them both back under Kyiv’s control.

“For our part, we are ready to discuss the new conditions for the coexistence of Ukraine and Russia—with the understanding that real normalization will take place only after a complete de-occupation of both the Donbas and Crimea,” Zelensky said in a statement released on the social media platform Telegram. 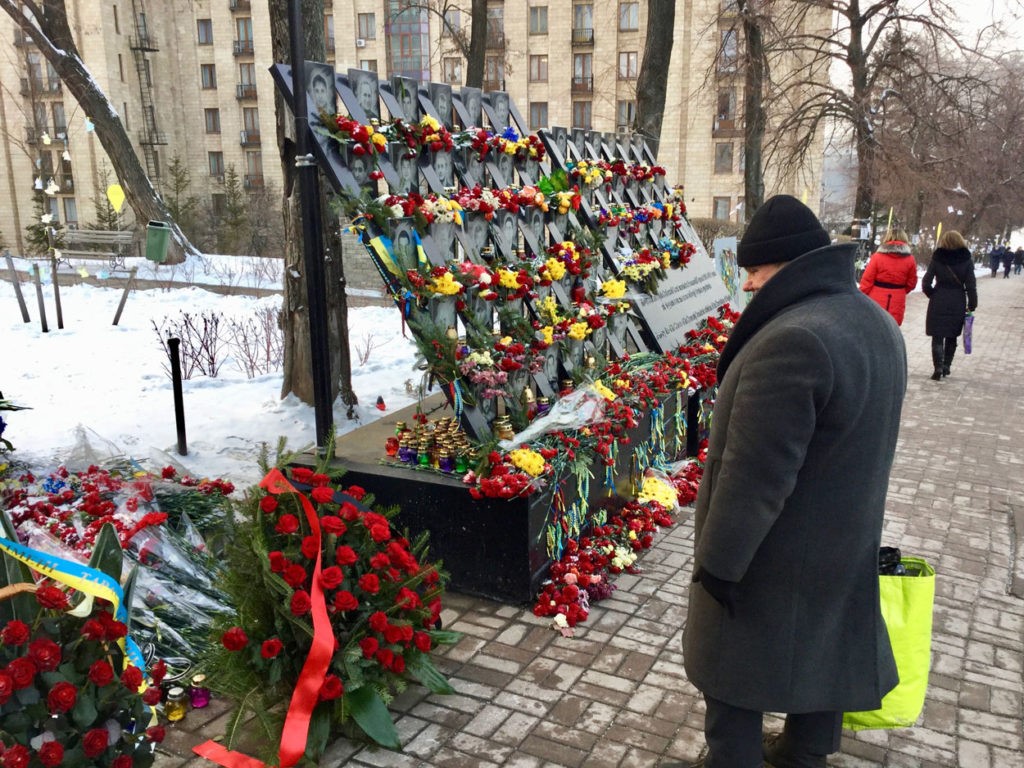 A memorial in central Kyiv to protesters killed during Ukraine’s 2014 revolution.

Some Ukrainian officials say Putin’s passport gambit is meant to give Russia a new bargaining chip during peace negotiations with Zelensky. By shifting the goal posts of a peace deal, those officials say, Moscow can preserve its status quo influence over the Donbas while securing new concessions from Kyiv.

“[Putin] is preparing an unfavorable background for the first dialogue with the president-elect. Nothing new or unexpected here,” Gerashchenko wrote.

A Success Story With Consequences

Despite the de facto war between their two countries, the Ukrainian and Russian peoples are not wholly estranged.

A 2011 poll by the Kyiv-based Research & Branding Group found that 49% of Ukrainians said they have family living in Russia. On social media, Ukrainian and Russian millennials routinely interact with each other; they follow the same musicians and popular culture trends, share memes, and even exchange political jokes.

The Russian people, consequently, will be paying close attention when Zelensky arrives in office on May 28 with a mandate to achieve peace in the Donbas, root out systemic corruption, and boost Ukraine’s economic growth.

Despite his political inexperience, Zelensky has evidently seized on the implications of his election within Russia, particularly if he can successfully follow through on his ambitious policy agenda.

According to Zelensky’s line of thinking, which many Western officials and experts share, a Ukrainian democratic success story undercuts the Kremlin’s argument that Ukraine would have been better off remaining within Russia’s so-called sphere of influence.

“I want to say to all the post-Soviet countries who watch us closely: Everything is possible,” Zelensky said during his campaign victory speech on April 21.

Nolan Peterson, a former special operations pilot and a combat veteran of Iraq and Afghanistan, is The Daily Signal’s foreign correspondent based in Ukraine. Send an email to Nolan.