What Did Obama Know and When Did He Know It? 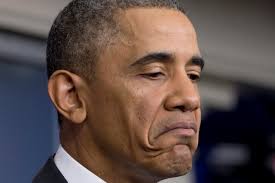 What Did Obama Know and When Did He Know It?

Attorney General William Barr made it all clear on Friday morning- with no wiggle room. Trump is completely 100% vindicated and exonerated.
Now comes the legitimate criminal investigation and prosecution. It’s time- as I’ve argued for two years now in this column- to turn the tables and go after the real criminals. Trump and AG Barr must name “Special Counselors” to investigate all the Democrat and Deep State scandals.

The entire Hillary email/private server/national security leaks and her destruction of 40,000 emails after being subpoenaed need to be re-investigated. So does the murder of DNC staffer Seth Rich (who many believe leaked damaging DNC emails to Wikileaks).

The entire fake Dossier that led to the FISA warrant (and therefore the entire investigation of Trump on “trumped-up charges) paid for by Hillary’s campaign, the DNC and the FBI, needs to be investigated.

The entire FBI/DOJ leadership needs to be investigated for fraud, bribery, bias and leaks of their investigations to the media.

The Clinton Foundation and Clinton Global Initiative need to be investigated. They were nothing more than “pay for play” scams, set up to extort billions from foreign countries and global billionaires, in return for access and favors from Hillary. The proof is that all donations dried up the minute she lost the presidential election.

The other key to exposing these crimes is the location of the Clinton Foundation- offshore. Why does a US charity that owes no taxes on donations need to be based outside the USA?

The Uranium One deal needs to be investigated. Hillary as Secretary of State approved the sale of a large portion of America’s uranium stock to the Russians. In return Bill Clinton received a $500,000 speech payoff and the Clinton Foundation received $140 million. Hillary likely committed treason against the citizens of the United States. There’s your real “Russian Collusion.”
The spying by Obama’s government on the Trump campaign needs to be investigated. It’s Watergate on steroids. The Obama government spied on the Trump presidential campaign to dig up dirt, or slander him, or frame him for crimes he didn’t commit. Or more likely to try to fix a presidential election in favor of Hillary.

The IRS scandal needs to be investigated. Was Obama using the IRS to enforce, intimidate and cover-up all the crimes going on under his watchful eye?

Then we come to Vice President Biden. Biden funneled $1.8 billion in aid money to Ukraine, while his son Hunter received $166,000 per month from a major Ukrainian company. Then Biden bragged on camera at a press conference how he threatened Ukraine with the loss of billions in US government funds, if they didn’t fire their chief prosecutor. That prosecutor just happened to be investigating crimes committed by Hunter Biden’s company.

All of these crimes come back to one man- Obama. He likely coordinated it all. He certainly oversaw it all. Nothing happened without his approval. He was the chief ringleader of the Obama Crime Family. He ran his government like organized crime- enforced ruthlessly by “hit men” from the FBI, DOJ, CIA, IRS and NSA.

Was Obama on the Clinton Foundation payroll? Was he on Hunter Biden’s payroll? If he gave approval to Hillary and Biden to loot and defraud US taxpayers, he must have gotten a cut for himself.

It all leads back to Obama. What did Obama know and when did he know it? When is the FBI going to raid his home and personal lawyer’s office?

This is going to be fun!