NYC Mayor De Blasio tells citizens: We own your bodies, and we can force you to be injected with anything we want 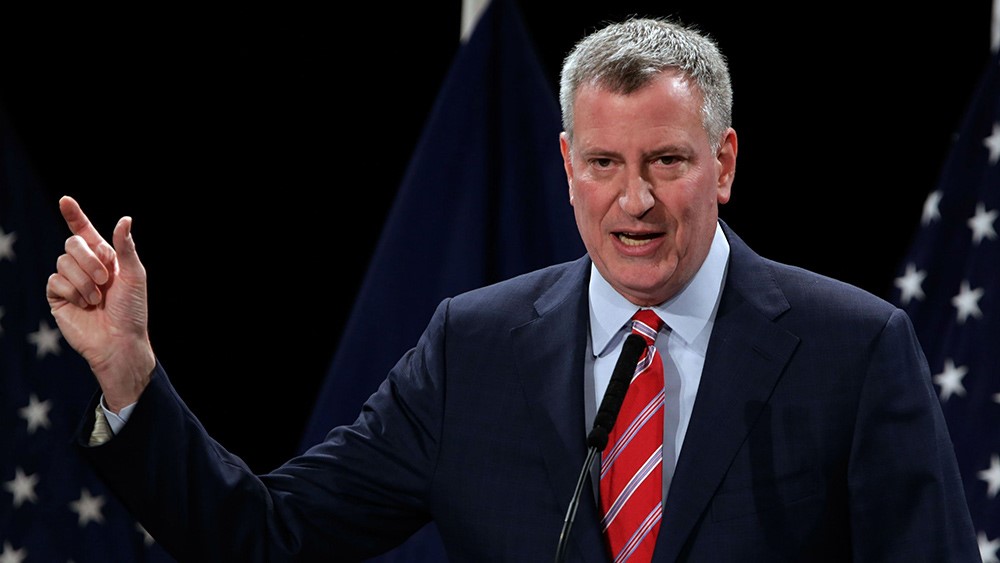 NYC Mayor De Blasio tells citizens: We own your bodies, and we can force you to be injected with anything we want

NYC Mayor Bill de Blasio has declared that residents do not own their own bodies. The city of New York can demand that all citizens be injected with literally anything the government declares to be a “vaccine,” even when those vaccines contain aborted human fetal tissue cells, toxic aluminum metals, inflammatory adjuvants and other dangerous, deadly chemicals.

This is the latest attempt by authorities in New York to obliterate human rights and roll out a medical dictatorship where citizens have zero rights to defend their own bodies against risky medial interventions that are demanded at gunpoint.

PJ Media, which has emerged as one of the best independent media websites covering liberty and individual rights, has published an especially noteworthy article on this issue. Authored by Megan Fox, the story is entitled, “Mayor Bill de Blasio’s Mandatory Measles Vaccination Order Faces Legal Challenges.”

We are republishing it here with full credit to the original author and PJ Media website. This an important read. Share everywhere.

In an unusual and extreme move, New York Mayor Bill de Blasio declared a state of emergency over a measles outbreak in the Orthodox Jewish community and is demanding forced vaccinations of everyone within four zip codes of the affected areas. Violators face fines up to $1000. This includes babies six months of age, even though the MMR is not recommended for anyone under twelve months of age.

The Children’s Health Defense will be filing a legal challenge to the order, which comes on the heels of a New York Supreme Court ruling that struck down the Rockland County banon unvaccinated children in public spaces.

Children’s Health Defense (CHD) is supporting a legal challenge to this dangerous, unprecedented overreach. While the City has unquestionable authority to control disease outbreaks, it may not violate the bedrock principle of prior, free and informed consent to all medical interventions, including vaccines. This is a fundamental human right. The City may quarantine, isolate, trace contacts and strongly urge vaccination, but it may not impose such a draconian mandate without demonstrating necessity, reasonableness, proportionality, harm avoidance, non-discrimination, due process and equal protection. The Commissioner has failed to do this; the City’s actions violate New York State law.

CHD board member Mary Holland commented, “I am shocked that Mayor de Blasio would resort to such police state techniques to control an outbreak of measles. I don’t believe the City’s actions will withstand legal scrutiny.” CHD Chairman Robert F. Kennedy Jr. is confident their legal challenge will prevail.

This case goes beyond a dispute over religious freedom. Thanks to the Merck federal whistleblower litigation, we now know that Merck’s MMR should have never been approved, much less mandated. To get its license Merck allegedly ordered its scientists to falsify efficacy data to fraudulently conceal the fact that the mumps component quickly wanes, triggering dangerous outbreaks in older populations where it can cause sterility in men and women. The Centers for Disease Control and Prevention (CDC) reported 150 outbreaks resulting in 9,200 cases of mumps in fully vaccinated adults, dwarfing the recent measles outbreaks. We are confident that no American court will allow government bureaucrats to force American citizens to take risky pharmaceutical products against their will.

Merck is currently defending itself against claims of falsifying data brought by two former employees.

Medical corporation Merck & Co. will decidedly face the music in the ongoing class action and related anti-trust lawsuit involving its mumps vaccine – a product routinely given to babies and children for generations. The issue, which involves allegations of false compliance with FDA standards for vaccines, prompted a False Claims Act lawsuit: United States v. Merck & Co. This case was commenced by two virologists once employed with Merck, alleges a systematic and long-standing commitment by the company to lying about the efficacy of its mumps vaccination, thereby prompting possible exposure to liability under the federal False Claims Act.

Governor Cuomo voiced concerns about the legality of de Blasio’s emergency order to forcibly vaccinate conscientious objectors. “Look, it’s a serious public health concern, but it’s also a serious First Amendment issue and it is going to be a constitutional, legal question,” Cuomo said in a radio interview on WAMC. “Do we have the right — does society, government have the right to say ‘you must vaccinate your child because I’m afraid your child is going to infect my child, even if you don’t want it done and even if it violates your religious beliefs?”

Some have asked how de Blasio is planning to determine who is or isn’t vaccinated to enforce his order. According to the mayor, they will be using “disease detectives.” de Blasio explained, “It parallels what a police detective does. If someone has symptoms, they will literally interview them to figure out everywhere they’ve been, everyone they might have come in contact with, and then they go reach out to that whole network to make sure people are vaccinated.” It’s unclear whether “make sure people are vaccinated” means “hold them down and inject them against their will.”