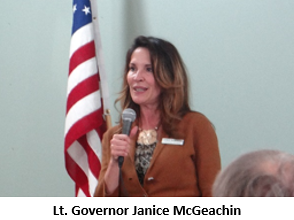 “I predict future happiness for Americans if they can prevent the government from wasting the labors of the people under the pretense of taking care of them.”  – Thomas Jefferson

Lt. Governor McGeachin acknowledged that her first speaking event during her campaign for Lt. Governor was with this group as The Republican Liberty Caucus in St. Mary’s two years ago and thanked everyone for that great kickoff support.  She then chose to read one of the many Thomas Jefferson quotes that were displayed on storyboards around the hall, which is one of her favorites, and she said it really kind of sums it up about government, “I predict future happiness for Americans if they can prevent the government from wasting the labors of the people under the pretense of taking care of them.”

McGeachin said she wished to speak about a few principles.  “Two of them are enshrined in our First Amendment rights in our Constitution. Those two are the freedom of speech and the freedom of religion. Attacks on these essential rights are increasing but are not always obvious in their source or strategy. Social media today has been engaging in censorship through de-platforming people who express controversial viewpoints. They aren’t stopping there however. In a recent editorial Facebook founder and CEO Mark Zuckerberg has called for the government to implement new regulations on harmful content.

“There was a young intern that helped me on my campaign who was a student at BSU. He shared an experience with us last semester in 2018 where he explained his professor was explaining to the class which she referred to as the ‘out’ rule and that this would be followed in her classroom. Any student who felt uncomfortable during classroom discussions was able to say ‘out’ and thereby terminate the conversation. Think about that. This is right here in Idaho. It’s not in California, it’s not in New York. It’s Idaho. One person’s discomfort is now considered grounds for silencing a discussion. Is it any wonder our educational system has problems?

“If we are to deal with challenges from our ever-changing world we must remain open to ideas and thoughts that are different even if we don’t agree with them. We cannot be open-minded if we close our minds. We cannot be tolerant if we are intolerant. We cannot be fair by being unfair. We cannot embrace freedom of speech while shunning speech. We can’t stand for equal rights while denying rights to some.

“Our unalienable rights which are enumerated by our founders in our Constitution are a blessing to be cherished and protected. Each of these rights come with a responsibility. The freedom of the press comes with the responsibility to tell the truth. A few weeks ago, I was photographed with two individuals who called themselves ‘patriots.’ Now that photograph was circulated and the media went into a frenzy, a literal frenzy. The liberal left then started calling for my resignation. Just this last week our governor was photographed with a known Democrat socialist. And silence. Think about that.

“Whenever you find entities working together to engage in censorship or to silence certain points of view, concern is warranted. Government might be the most obvious threat but the mainstream media and social media participate as well.

“Now let’s talk about the freedom of religion. If you study the history of our country there can be no denial that the very reason people came to our country was so that they could practice their religion freely. That is a part of our history from the short lived French Huguenots settlement of Fort Caroline near present day Jacksonville, Florida to the Massachusetts Bay Colony, which John Winthrop referred to it as a city upon the hill. The fight for religious liberty has always been an integral part of our history.

“I did some research on this quote from this John Winthrop who came over on the ship Arbella in 1630. He brought over thousands of Puritans to practice their religion freely. And he said that he would build a city on a hill with a light. What does he mean by that? Where does that come from? It’s a Bible verse quoted in Matthew and it refers to Jesus’s Sermon on the Mount and the Beatitudes. I exhort you to go home and review that, the Sermon on the Mount and the Beatitudes. This is what our country was all about, we are meant to be a shining light on the hill because we have the foundational principles that are correct.

“It’s all about liberty and freedom living freely as a nation. We should not be ashamed of that. That is our heritage, our destiny.  We are conservatives and that’s what we believe. We need to stand tall in that and protect that original concept of what this country, America, is all about. And that we are a light to shine into the rest of the world. I’ll also note that JFK and Ronald Reagan both referred to America as being the city on the hill. If we don’t keep our principles grounded in the conviction of what they should be, we will lose our light and we will lose our liberties and our freedom.

“’And then here is a law that was drafted by our good friend Thomas Jefferson who wrote the Virginia Statute for Religious Freedom and is considered to be the forerunner of the religious freedom protection found in the First Amendment to the Constitution. And it says, ‘No man shall be compelled to frequent or support any religious worship place or ministry whatsoever nor shall be forced, restrained, molested or burdened in his body or goods nor shall otherwise suffer on account of his religious opinions or belief; but that all men shall be free to profess, and by argument to maintain, their opinion in matters of religion, and that the same shall in no wise diminish, enlarge, or affect their civil capacities.’

“The statue went on to almost in an observational sense acknowledge that even the revocation of the act would not justify the violation of these natural rights. It declares the rights hereby asserted are of the natural rights of mankind and that if any act shall be hereafter passed to repeal the present or to narrow its operation such as would be an infringement of natural rights. The liberal left likes to distort our belief in the freedom of religion to say that we’re trying to make other people conform to us or were trying to establish certain religions through the government. That is so opposite from what the intent of our founding fathers intended and what this nation was founded on.

“Our own Constitution recognizes that the exercise and enjoyment of religious faith and worship shall forever be guaranteed and no person shall be denied any civil or political right, privilege or capacity on account of his religious opinions. It further declares no person shall be required to attend or support any ministry, place of worship, religious sect or denomination or pay tithes against his consent, nor shall any preference be given by law to any religious denomination or mode of worship. That is what we are protecting ourselves from. The government shouldn’t establish something that we should be forced to comply with. That’s exactly why the people came to America, so that they could get away from that which the Church of England was trying to force upon them.

“In conclusion, I want to share with you some info about our Bonneville County Lincoln Day Banquet that’s coming up a week from today where we have invited a man named David Barton. He runs an organization in Texas called the Wall Builders. He talks about God and the Constitution.

“So in Idaho Falls we have two city Council members who are working with the chair of the Democrat party to advance a counter conversation to the discussion of history and religious liberty. They use the Southern Poverty Law Center’s (SPLC) hit piece on David Barton while conveniently ignoring recent revelations that the SPLC is nothing more than a highly profitable scam.

“Is that what Idaho has become in 2019? Around the country and even right here in Idaho we are frequently told that we must give up our heritage or our freedom. They are too old-fashioned and out of date we hear.  The Progressives offer alternatives based on collectivism and central planning. They offer up counter conversations to replace our traditions and our history. Are your views soon to be branded as the harmful content that Mark Zuckerberg and others like him want to regulate and ban?

“We have a choice ladies and gentlemen, either we embrace the First Amendment and the rights it recognizes or we allow the progressives to re-define our rights out of existence. Which path will we choose?

“I’m going to end on a positive note. I’m going to talk about some good things that happen in Idaho which we all know. Our second amendment right is what protects our First Amendment rights. And so there are a couple good things that happened in Idaho this year. Some Red Flag Laws were stamped down and prevented from being put in our Constitution. Also constitutional carry was passed and it has been signed by our governor.  It allows adult law-abiding individuals to carry openly even within the city limits.

“So those are some positive notes that I want to end with you today.”