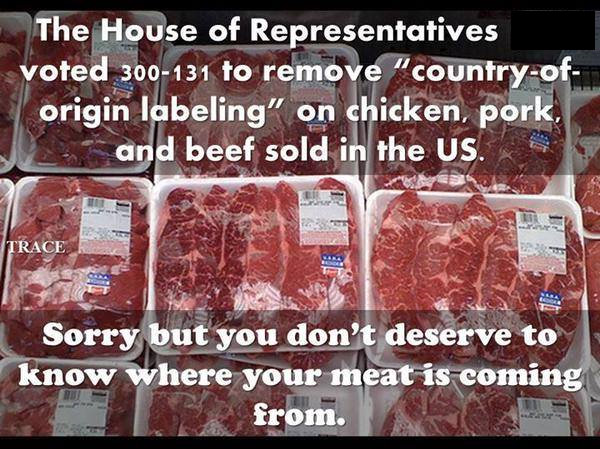 Senator Jon Tester’s (D-MT) office gave permission for this to be shared for purposes of trying to get some more Senators to cosponsor.  So here it is so you all will know what is in it.  If you think one or more of your Senators would support this, please share it with them and ask them to contact Senator Jon Tester’s office or Phone: (202) 224-2644.

Here is Senator Tester’s Senate COOL resolution that he plans to introduce in the U.S. Senate:

Reaffirming a strong commitment to U.S. producers and American-made commodities.

WHEREAS the U.S. farmers and ranchers raise the best meat in the world;

WHEREAS Americans should have the right to knowingly buy made in American products.

WHEREAS American farmers, ranchers and consumers benefit from transparency on the origin of food;

WHEREAS Congress overwhelmingly supported Country of Origin Labeling (COOL) in the 2008 Farm Bill because 87 percent of consumers want to know the country of origin of their meat;

WHEREAS in 2012 the World Trade Organization ruled that U.S. COOL requirements were inconsistent with the WTO agreement on technical barriers to trade, and ruled that it provided the United States an unfair trade advantage;

WHEREAS in 2015, Congress repealed the County-of-Origin Labeling (COOL) law for beef and pork, undermining the economic welfare of American farmers, ranchers, consumers and good-paying rural jobs;

WHEREAS in an era where our nation is focusing on building its manufacturing base and restoring made-in-America brands, it is counterproductive to have a law on the books that prohibits our nation’s ranchers from taking credit for their products made right here in the United States of America;

WHEREAS the United States has the highest phytosanitary standards in the world while other countries place less emphasis on food safety;

WHEREAS foreign commodities, like beef and pork, are misleadingly labeled “Product of USA” if they are processed or packed in the United States;

WHEREAS even if cattle and hog farmers and ranchers seek to voluntarily apply COOL, there is no way to distinguish true American products from foreign pork and beef;

WHEREAS technological advancements make it possible to accurately and efficiently identify the origin of beef and pork without costly segregation of imported and domestic commodities, as proven by specific contracts between large meat packers and foreign producers;

WHEREAS County-of-Origin labeling is good for small farmers and ranchers because it allows them to identify their livestock as born and raised in the United States;

Resolved – Congress will reinstate County-of-Origin labeling for pork and beef to allow consumers to make an informed and free choice about where their food comes from.