Saving the worst for last in the Washington Legislature 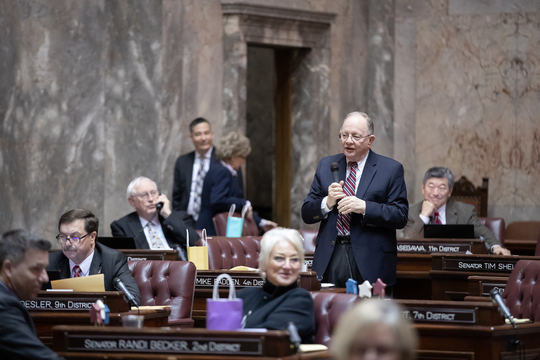 Saving the worst for last in the Washington Legislature

We’re in the home stretch now of our 2019 legislative session, and about the only thing that is certain is that we will be adjourning our current session by April 28. That’s because the constitution tells us we have to. But there’s still no telling if we will be back again the next day, or sometime thereafter, to wrap up unfinished business in a special session.

Most of the big policy bills of the year still have not gotten their final votes. So we’re going to see some rollicking arguments on the floor of the House and Senate before we call it a year. We’ll be debating everything from making Washington a sanctuary state for illegal aliens to costly mandates for electric utilities that will translate to higher bills for consumers. We still have to decide on gun control proposals, vaccination requirements and critical criminal justice issues. If the majority’s budget negotiators can reach agreement in time, next week we also will be debating steep new taxes on small business, on real-estate transactions and a brand-new income tax on capital gains that likely would be extended to all of us in short order.

That’s a lot to do in just 10 days. You might say the worst has been saved for last. None of us are looking forward to the big debate over taxes that will occur when budget proposals are finally released. But it would be worse if we remained here in special session, costing taxpayers thousands of dollars every day, to debate proposals for higher taxes we don’t need and are overwhelmingly opposed by Washington voters. Let us hope our colleagues in the majority do not allow this to happen. This week I’ll tell you a bit about where we stand as our session roars into the concluding phase.

Remember – we’re here ‘til the bitter end. And if you have a comment or concern about a state agency or the direction of state government, please do not hesitate to contact us. We’re here to serve you.

One of my most important proposals for this year won approval from the state Senate Wednesday in a modified form. This year I sponsored legislation that would allow courts to consider DUI convictions within the last 15 years when issuing sentences. Right now, courts can only consider convictions within the last 10 years. Washington permits felony charges on the fourth conviction, and by extending the look-back, we would be able to hold more impaired drivers accountable. This bill died midway through the session, but has been revived as an amendment to HB 1504, a bill that makes other changes to DUI laws. The measure passed the Senate Wednesday 47-1, but must return to the House for concurrence on amendments. You can read more here.

Also advancing Wednesday was a bill I have sponsored that requires county officials to seek mediation before suing one another in their official capacities. SB 5560 would reduce the costly spectacle of lawsuits in which taxpayers foot the bill for both sides. The measure passed the House 98-0, but amendments in the House will require another vote in the Senate. 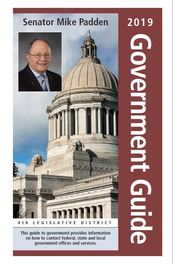 Our office has released a new edition of our Government Guide, a directory of federal, state and local offices serving the 4th Legislative District. This directory offers a handy reference on how to contact government offices, and other frequently-called service providers.

We have mailed this directory throughout the district, but if you do not receive a copy, let us know and we will send one to you. You can reach us by calling (360) 786-7606, or by emailing us at Mike.Padden@leg.wa.gov. The directory also can be seen online by clicking here.

A bill that should take a bite out of rising auto-theft rates in Spokane County was approved by the House Tuesday and goes on to the governor’s desk. I am a cosponsor of Senate Bill 5492, which would allow courts to sentence car thieves to as much as a year of community supervision after their release from prison.

This bill tackles a major problem for our area, a national hotspot for property crime. Virtually all of us have been victimized, or know someone who has been a victim. Law enforcement authorities in our area say a handful of repeat offenders, many of whom have had numerous convictions, are responsible for the bulk of auto thefts. By placing these offenders under community supervision, we reduce the chance that they will return to their old ways. The bill has been a top priority for several years for Spokane Mayor David Condon, Police Chief Craig Meidl, County Prosecutor Larry Haskell, and the Spokane City Council.

The bill was imperiled by a House committee amendment that would have reduced prison time significantly. To make sure the measure cost the state no additional money, we had to dial back on prison terms when supervision is imposed, cutting them by a third. The House committee amendment cut them in half, reducing the chance that judges would utilize this new sentencing option. But the amendment was rejected when the bill came to the floor of the House. The measure passed the House 92-0, following a 48-0 vote in the Senate March 5. 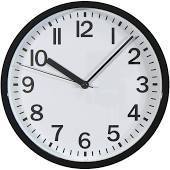 A bill moving Washington state to permanent daylight saving time was approved by the Senate Tuesday night and goes to the governor for signature. But this is still far from a done deal. First Congress must allow states to adopt daylight saving time year-round. Currently states only have the option of reverting to standard time. HB 1196 is a revised version of a measure promoted for the last several years by Sen. Jim Honeyford, R-Sunnyside. Unlike Honeyford’s proposal, this one does not require a public referendum. A public vote would have underscored public support for the proposal and sent a message to Congress. So for the time being, plan on setting your clocks back in November. 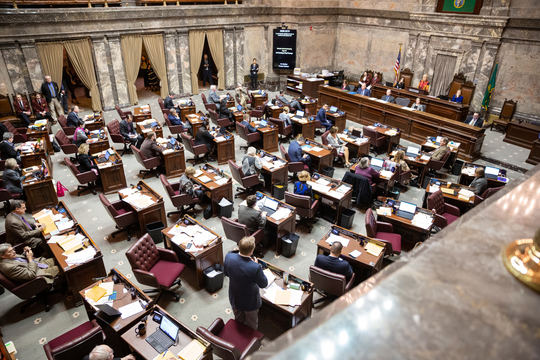 Where the action is: A busy floor session in the Washington Senate.

Where things stand — as of this morning

This week we hit the last of the Legislature’s major deadlines. Wednesday was the last day for the House and Senate to pass bills originating in the other chamber, with the exception of budget-related bills and initiatives. We’ve spent most of the last week on the House and Senate floors, passing bills in a flurry. Because many of these bills were amended by the opposing chamber, further votes must be taken before we adjourn for the year. But many others were approved without amendment and move on for the governor’s signature.

Most of the highly-controversial bills before us this session were amended and must survive further votes. The list of bills that require further action is extensive. Add them to the big budget bills we expect to see next week and you can see we’re going to have a busy final 10 days. Measures that remain in play include:

Controversial bills that have won final passage include:

Weakening Three Strikes You’re Out – SB 5288, approved by the House Tuesday, removes second-degree robbery from the list of offenses that qualify offenders for life without parole on the third conviction for a violent or serious crime. Washington’s Three Strikes law, approved by voters in 1993, was the first of 28 such laws passed nationwide, and has contributed to the declining crime rate we have seen in this state and nationwide. Three Strikes presents an easy-to-understand message to career criminals. On the third strike, they go down for life. Some of our urban Western Washington colleagues consider that harsh, and have been working this session to turn it back. Another bill this session would have considered prisoners for release after 15 years. While that proposal failed, it could be revived in the budget, and at the very least, passage of SB 5288 signals the start of an effort that will likely haunt future sessions.