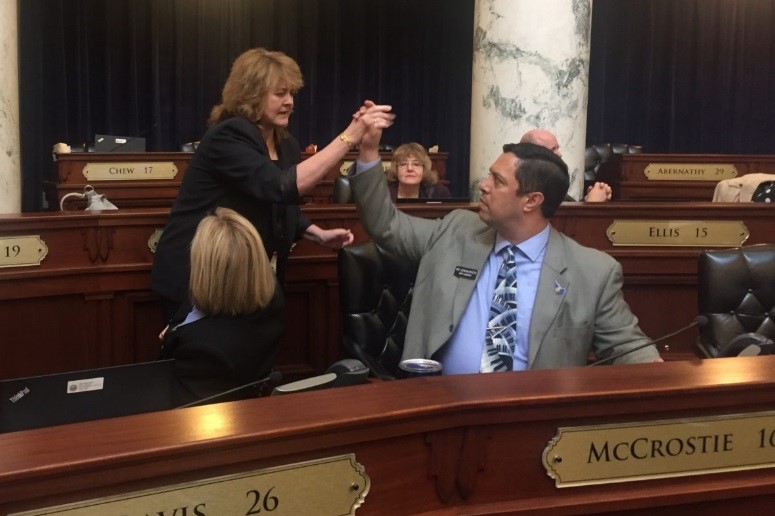 A convoluted and sometimes divisive 2019 legislative session came to an end Thursday afternoon, after 95 days under the Statehouse rotunda.

Before the gavel fell at 4:20 p.m., the Senate unanimously — if somewhat reluctantly — passed House Bill 297, the 2019-20 State Board of Education budget.

The House killed the original State Board budget on March 7. After that, budget-writers rewrote it and reduced funding by $750,000 to reflect a different House vote to kill a school turnaround bill.

Overall, the State Board budget includes $5.6 million in general fund spending, down 11.9 percent from this year.

Sponsoring Sen. C. Scott Grow, R-Eagle, said the new task force will be called on “to evaluate the next steps in strategic funding of public schools for the future.”

Senate Education Committee Chairman Dean Mortimer, R-Idaho Falls, voted in favor of the budget, but said he regrets that it contains funding cuts and no new money to help struggling schools.

Check out our watchdog work »

“I think this budget is obviously inadequate, but it is all we can do and this is where we have come to in this session, I guess,” said Burgoyne, D-Boise.

The House passed the State Board budget Wednesday. It heads next to Little’s desk for final consideration.

The session ended with some fireworks. The Senate again killed three bills aimed at renovating House office spaces and allowing the state to purchase additional office space adjacent to the Statehouse. Then the House killed Senate Bill 1215, a bill designed to formalize the Legislature’s work to approve agency rules. Shortly thereafter, the House adjourned for the year, seemingly allowing all administrative rules to expire this summer.

Earlier Thursday, Sen. Todd Lakey, R-Nampa, suggested the death of the rules bill could require Little to approve all rules on a temporary basis, “or perhaps (convene) a special session” to address the issue. On Wednesday, Boise State Public Radio’s James Dawson reported if all rules are allowed to expire, it could cost the taxpayers $400,000 to have more than 8,000 pages of rules printed in the Administrative Bulletin for public notice, if the current per-page fee rate is charged.

In his post-session press conference, House Speaker Scott Bedke, R-Oakley, confirmed the rules will expire. That is likely to trigger a wholesale revisiting of the each of the rules by Little and the executive branch. Bedke added that it is “certainly within (Little’s) prerogative to reissue them in a temporary way.”

If Little reissues all rules temporarily, that would likely require the 2020 Legislature to review every rule — both new and long-established existing rules. Rules carry the force of law, and affect everything from public school academic standards to immunization rules, state fees, Medicaid guidelines and much more.

Because the rules can be published online, Bedke said the cost and burden likely won’t be as bad as initially thought this week. However, he did say a comprehensive rules review next year would be an extra burden for legislative committees and state rules administrators.

“It’s mammoth, and the consequences could be gargantuan,” McCrostie said.

The rules debate was one of the last fights keeping legislators in session and does have education implications. In recent years, lawmakers have approved Common Core standards and school science standards through rule.

Throughout the session, House members grumbled over the rules process. They say the process that allows pending rules to pass with the approval of just one legislative chamber allows the Senate to overrule the House.

The debate became particularly contentious in each of the past two years. In 2018, the Senate approved new science standards after the House unsuccessfully attempted to remove supporting content and several references to climate change and fossil fuels. Then, earlier this year, the Senate approved rules governing high school graduation requirements and math requirements, while the House made unsuccessful efforts to reject portions of those rules.

Even the end-of-session traditions and ceremony illustrated the friction between the House and the Senate. As is custom, the House appointed a committee of three lawmakers to inform the Senate that their business was finished for the year. But in a break with tradition, Bedke did not dispatch two Republicans and a Democrat, instead sending three Democrats across the rotunda.

“It’s a long road that does not have a turn in it,” Bedke said during a break.