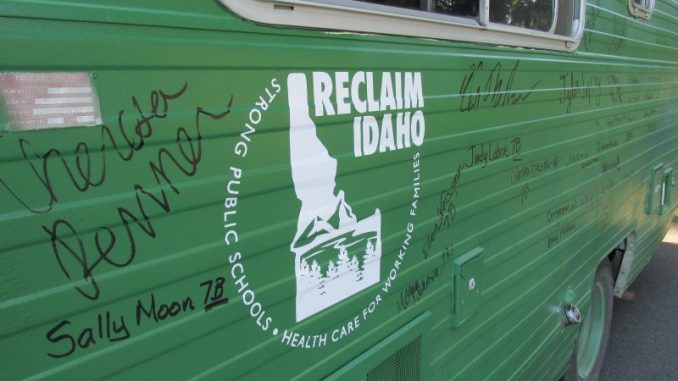 OUR INITIATIVE PROCESS WASN’T MEANT TO BE MANIPULATED IN THIS WAY.

The sheer hypocrisy of Luke Mayville’s recent op-ed accusing Republicans of corruption (very subtly titled, “Corruption, Corruption, Corruption”) is truly amazing. You see, Mayville – a New York City Ivy League professor who leads the group “Reclaim Idaho,” which was behind the Medicaid expansion initiative on the November 2018 ballot – has relied on hundreds of thousands of dollars from a corrupt California union.

Reclaim Idaho, despite its claims of being a totally grassroots organization, has close financial and ideological ties to a group called “The Fairness Project,” which is itself the brainchild of a highly controversial California union, the Oakland-based Service Employees International Union-United Healthcare Workers West (SEIU-UHW for short). The Fairness Project has spent at least $16 million and counting on progressive ballot initiatives in California and many other states, including here in Idaho. In addition to union dues, the Fairness Project has received at least a half-million dollars from a foundation run by left-wing billionaire activist George Soros.

The Fairness Project spent about $547,000 in Idaho on paid signature-gatherers and consulting services to get Medicaid expansion on the ballot, according to campaign finance disclosure reports. It also offered its donor list to Reclaim Idaho and other supporters of Medicaid expansion, to the tune of about $850,000 out-of-state dollars, according to a political consultant who worked on the initiative campaign and was paid by the Fairness Project.

You may be wondering why a California union is pouring money into initiatives in states across the country, and why a group like Reclaim Idaho would take a dime from such a shady group. It’s a very good question, especially when you read all the reports about the union’s boss, a man named Dave Regan (no relation to the author), being accused of alleged “ballot box blackmail,” of being a “ballot measure extortionist,” physical assault, intimidating a police officer and, most recently, sexual misconduct in the workplace. Even leftist labor activists in California are strongly critical of Regan, calling him a “bully” and worse.

The answer to why a California union is involved in so many out-of-state campaigns comes from union boss Regan himself. According to union meeting minutes available online, Regan says he wants to use “ballot measures as a tool to exert union strength” and advocated “similar tactics both within and outside of California.” He says he has a plan to “change the political landscape in California and around the country.” In other words, he wants to exploit our initiative process to gain power nationwide, including here in Idaho.

Reclaim Idaho is apparently more than happy to be the puppet of this corrupt California union boss. Last summer, at the height of the campaign season and in the midst of her own unsuccessful bid for the Idaho State House as a Democrat, current Reclaim Idaho Executive Director Rebecca Schroeder went to San Jose for the June 2018 SEIU-UHW Executive Board meeting to make a pitch for Idaho’s Medicaid expansion initiative. Two months later, the union gave the Fairness Project, Reclaim Idaho’s backer, an additional $3 million.

Given all this, it is beyond hypocritical for Luke Mayville or anyone else from Reclaim Idaho to moralize about “corruption.” In fact, given its ties to such a shady union, it seems that Reclaim Idaho owes the people of Idaho more truth and transparency, and less propaganda. Our initiative process wasn’t meant to be manipulated in this way. It’s time we held Reclaim Idaho accountable.