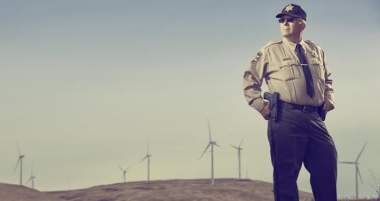 The trend of local police departments and sheriffs’ offices kowtowing to the anti-gun crowd — a trend that has been growing for decades — seems to be reversing. Take the state of Washington as an example. Roughly half the sheriffs in the state are flat refusing to enforce a litany of anti-gun regulations that are part of a law passed last fall because those regulations are unconstitutional.

A fundamental part of a free society is the existence of a strong, local police force independent of outside influence — especially influence that is either political or federal. It is one of the things that distinguishes the United States from other nations. In an exclusive interview, Klickitat County Sheriff Bob Songer told The New American that he and many other sheriffs in Washington understand the constitutional nature of their jobs. He referred to a quote by Sheriff Tom Jones in Grant County, who said, “I swore an oath to defend our citizens and their constitutionally-protected rights. I do not believe the popular vote overrules that.” Sheriff Songer told The New American, “Sheriff Jones is spot-on.”

The quote by Sheriff Jones about “the popular vote” is a reference to the fact that last November, the people of Washington voted to pass Initiative 1639 (I-1639). In fact, more than 60 percent of those who voted on the issue voted for I-1639. The law adds several new layers of restriction to the right to keep and bear arms. As the Seattle Times reported at the time:

I-1639 raises the legal age to buy any semi-automatic rifle to 21, from 18. People wanting one also have to pass an enhanced background check, show proof that they have taken a firearms-training course, and wait 10 business days before they take possession of the weapon.

The initiative defines a semi-automatic rifle as one that uses energy from firing a cartridge to chamber the next round and requires “a separate pull of the trigger” to fire each bullet. Long guns that use manual operations — such as pumps, slides, levers or bolts — to chamber a round would still be available for people to purchase at age 18. (You currently have to be 21 to buy a handgun in Washington.)

The I-1639 measure also creates a gun registry (since an applicant has to list the serial number of the semi-automatic rifle he plans to purchase) and requires an applicant to waive his privacy rights under HIPAA (since he must agree to a full release of his medical records).

Sheriff Songer and roughly 20 of the other sheriffs in Washington — along with at least one police chief — have said they will not enforce I-1639. What that means in the day-to-day world of buying semi-automatic rifle varies from case to case.

For instance, it is unlikely that a licensed firearms dealer will sell a gun to a person under 21, but the “enhanced background check” that is required by I-1639 is the responsibility of the sheriff. If a person at least 21 years old fills out the forms at a gun store, and the sheriff simply does not run the check at all, then once the 10 business days are up, the rifle can be sold to the person who applied for the background check.

Private sales will be where the sheriff’s refusal really shows itself. If a rifle is sold to a person under 21, I-1639 says both the buyer and the seller are breaking the law. Sheriff Songer was very clear on this point: He will not investigate or arrest anyone for the violation of a law that itself violates the constitutions of both the state of Washington and the United States. Period. So, in Klickitat County (and the other 20 counties where sheriffs have said the same thing), private sales of semi-automatic rifles can continue unabated.

As mentioned above, Sheriff Songer’s refusal to enforce I-1636 is based in his understanding of his responsibilities under the Constitutions of both Washington and the United States. “It’s a bad law. It’s an illegal law,” he said, adding that this law “illegally amends the Constitution” by setting aside the Second Amendment. In passing I-1639 by popular vote, “They bypassed [the] process [for amending the Constitution] and called it ‘democracy.’” He asked, “Why would I — as sheriff of Klickitat County — go out and enforce a law that I believe is truly unconstitutional and end up arresting people, seizing their property, and so forth, based on a bad law?”

And he has a valid point, After all, the Second Amendment says, “The right of the people to keep and bear arms shall not be infringed.” It does not say, “unless the ‘democratic majority’ of a state votes to infringe that right.” And — as Sheriff Songer pointed out, the Constitution of the State of Washington includes an article that is “patterned after the Second Amendment [of the United States Constitution] except it’s even clearer in the sense that it says the right to keep and bear arms is an individual right.” The exact wording of section 24 “Right to Bear Arms” is, “The right of the individual citizen to bear arms in defense of himself, or the state, shall not be impaired, but nothing in this section shall be construed as authorizing individuals or corporations to organize, maintain or employ an armed body of men.”

Sheriff Songer expressed his frustration over the fact that an 18-year-old can get married, enter into a contract, vote, and join the military and kill or be killed for his country, but in Washington he can’t buy a semi-automatic rifle without being made into a criminal.

As for the ruse of “democracy,” Sheriff Songer told The New American that the passage of I-1639 was not equal across the state. The small communities that make up most of Washington were not in favor of the law, but they were outvoted by the big cities. Sheriff Songer said, “Where you see the support for 1639 is in the heavily populated” areas of the state. In his county, Sheriff Songer said he is “receiving very positive support” for his stand on I-1639.

But such is the nature of democracy — which George Washington famously described as “the tyranny of fifty-one percent.” That is why the United States was formed not as a democracy, but as a republic. As Sheriff Songer and the other sheriffs who are standing up against I-1639 seem to understand, the rule of law in the United States is adherence to the Constitution.

Sheriff Songer is a 48-year veteran of law enforcement and is in his second term as sheriff. He said his experience has shown him that “there are a lot of police chiefs that believe the way I do [about this type of law] but some of them will not speak up because they can be let go for no cause since they serve at the pleasure of the mayor, city council, county council, or governor. That’s where the sheriffs are unique; the governor is not my boss, Attorney General Ferguson is not my boss. The only people that I am responsible to and that I consider my boss are the citizens of Klickitat County.”

Thank God for Sheriff Songer and those like him who are willing to stand for the republic.